The pick was a big deal because most of us already think the 25th Amendment is made-to-order for Joe Biden. Start buying your popcorn in bulk, because this race just got crazy.

In perhaps the worst-kept secret of the year, Joe Biden announced that the OTHER person on the ticket will be…

How badly was this ‘secret’ kept?

Politico accidentally published a story announcing her selection — written in past tense. The story referenced the date in August that Biden announced his Veep choice. One small problem. It was published in July. Politico Retracts Story Calling Kamala Biden’s VEEP Choice… Do You Buy Their Explanation?

If THIS is the institutional competence the Democrats are trying to ‘wow’ us with, that’s a pretty sad reflection on the whole party.

Ok, so the suspense and the rollout were a complete flop. But what about the candidate herself?

She publicly stated that she believes the women that accused him of creepy behavior.

But Kamala is also A-OK with serving under his uh, ‘leadership’ despite personally believing that Joe molested a woman. That fact actually says more about HER lust for power than it does about Joe’s more carnal lusts.

Don’t take our word for it, here’s the quote from a leftist site:

Sen. Kamala Harris (D-Calif.) said she believes the women who have come forward alleging that former Vice President Joe Biden touched them without their consent.

“I believe them, and I respect them being able to tell their story and having the courage to do it,” Harris told reporters at a presidential campaign stop in Nevada on Tuesday. –Huffpo

Or are we all supposed to suddenly forget that Tara Reade accused Gropey Joe of forcibly violating her body with his hand?

Come to think of it, when’s the last time we’ve heard Tara Reade’s name in the press? Have they even mentioned it since Joe got the nomination? Probably not, unless they attach a dismissive word like ‘discredited’, ‘unfounded’ or ‘debunked’. You know, the words they STILL won’t use to describe the entirely discredited, unfounded, and debunked Spygate accusations against Trump.

Here are the public responses to this announcement:

This is actually a pretty funny dig:

When you hide in your basement this long, you have to photoshop a picture of yourself with your running mate pic.twitter.com/aHSaTM0vEa

Well, that photoshop isn’t as creative as this next one, and not nearly as honest…

He picks #KamalaHarris and the Dow drops faster than she did to #FreeWillie. pic.twitter.com/u8bguJ0W0V

Actually, that might explain why Kamala DGAF about Joe digitally raping a staffer. Sex might be just another form of political currency to her.

Harris might even wonder why Tara didn’t willingly ‘give it up’ in exchange for an opportunity to supercharge her career advancement like — well — Kamala herself did. 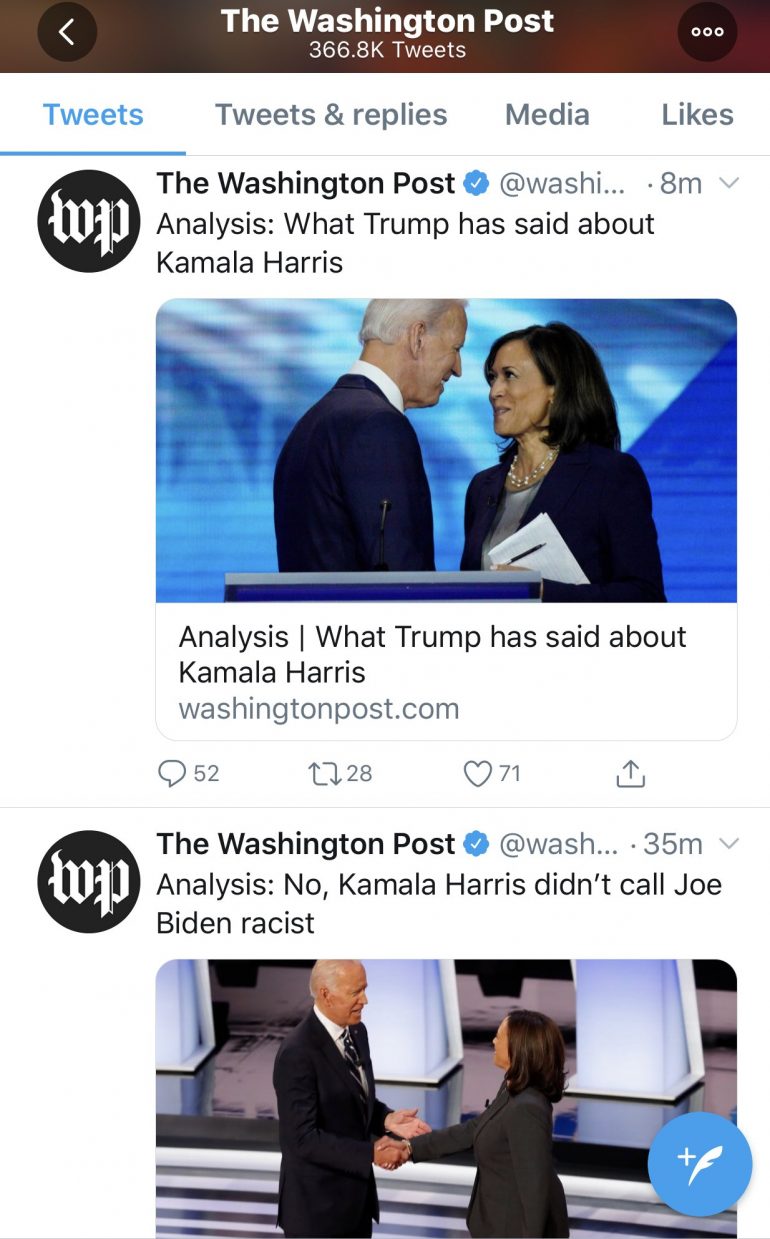 But CNN’s “Media Watchdog” Brian Stelter says, “tHeRe ArE nO pArTiSaN mEdiA oUtLeTs ThAt FaVoR dEmOcRaTs!”

Democrats play the tune and the Media(D) sycophants (like Brian) dance for them.

…they just don’t realize that they’re the only ones.

President Trump realizes it, though. Check out his thoughts on Joe’s running mate. 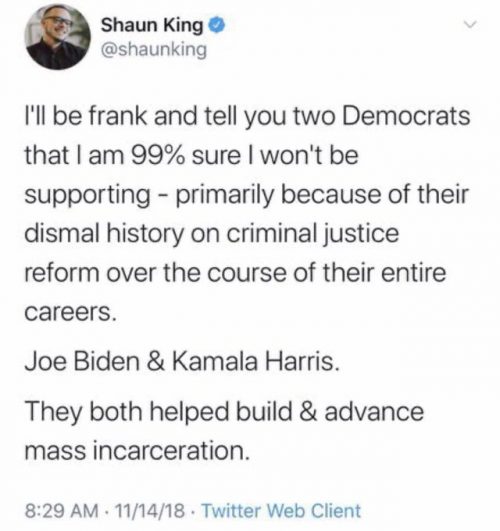 But now that Harris is Biden’s Veep pick, Shaun King has had a change of heart because she’s suddenly ‘grown’ on the issue of criminal justice.

That's it for me.

I am incredibly proud to see a brilliant Black woman, and HBCU grad, chosen as a Vice Presidential nominee.

I've done political work my whole life. It's rarely things dreams are made of.

Kamala Harris is the most progressive VP nominee in American history.

Really? She’s seen the errors of her ways of mass incarceration, has she? Is that why she was ‘leading the charge’ against Senator Tim Scott(R-SC)’s police reform bill?

Candace Owens isn’t so sure. l

All jokes aside— I respect @JoeBiden for finding a Vice Presidential mate that locked up *almost* as many black men as he did. #KamalaHarris

The President also tweeted out a new ad that is absolutely BRUTAL.