With Dem policy tilting so far left that Obama seems centrist by comparison, there is one sense in which Joe would be a defacto third term for Obama — his contempt of the cops.

That contempt was on full display in the press report he gave in response to the events in Kenosha.

All we know for sure is that a man was shot during an interaction with police. An investigation is ongoing, and the police officers in question have not spoken in their own defense.

That hasn’t stopped Joe from wagging his finger at the bad men in blue. After all, why should THEY benefit from the presumption of innocence afforded to every other American?

Here is the vile press release Biden has offered up:

This statement is vile. It doesn't take down the temperature; it raises it. It explicitly jumps to conclusions in the absence of evidence. It's racial demagoguery of the highest order. And this is supposedly the man who will restore calm and normalcy to the country? pic.twitter.com/mWCtoxl4pd 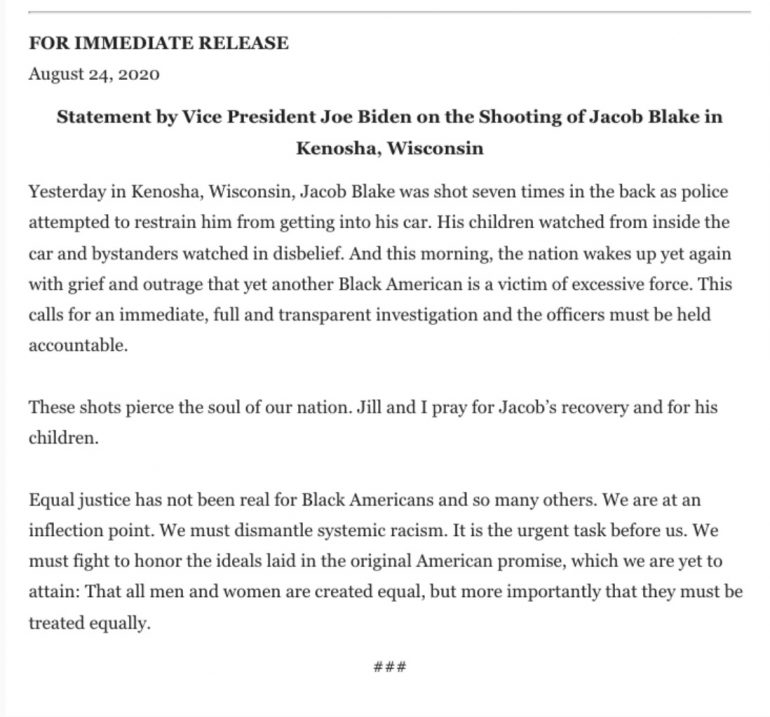 Pretty sick stuff for a man who has pledged to bring America together, dontcha think?

Jacob Blake, the man shot by police in Kenosha, Wisc., has a history of assaulting police. He also has past charges for domestic abuse & a sex crime. There's a warrent for his arrest. BLM rioters are currently destroying the city to avenge the shooting. https://t.co/BErLeJdPwj pic.twitter.com/JhHcbis5kf

There was a warrant.

As recently as last night, an interview aired in which he was asked about bringing the country together.

MUIR: Mr. Vice President, last night you said I’ll be the Democratic candidate, but I’ll be an American president. This is a very polarized country. How will you bring together people?

BIDEN: The president’s job is to heal, to heal. This country needs healing. I’ll be a president who tells the truth, who takes responsibility and who in fact invites the opposition to come to the Oval Office and settle problems together. Look at this president. In the middle of what we’re trying to figure out in this next piece of aid for local, state and government, he hasn’t even had the Republicans and Democrats sit down in the Oval Office. He is out in a sand trap somewhere, sand trap– golfing. What is this all about? You’re a student of history, name me a president in the middle of a crisis, who’s ever completely walked away?

Presidents– the words of a president matters, no matter who he is. And it’s about time we start to hear from a president that it’s about uniting the country, bringing together– it’s going to be hard, nothing easy about it. But I’ve done that all my life and people say well things are so different now, they are different now, it’s going to take time to heal. But the president has to be willing to engage and I’m willing to engage and I think we can get so much done. Last thing I’ll say, remember after he won we were told before he got sworn in– we were told to be no more legislation law, Mitch McConnell said nothing else. We had been working on a bill The Cures Act for almost $9 billion for NIH and for cancer research. I put together the Democrats and Republicans, we only had a handful of votes in both places, it ended up passing in December after we were no longer– we were going to change office in January, in December, and it passed like 390 some members of house and 94 members of the Senate. —ABCNews

Heat and light, even.

IF OBAMA HAD A SON: Obama Cites #Trayvon Martin at Black History Reception
Unlike Obama, Trump SUPPORTS Our ‘Courageous Police’ – SHARE If You LOVE It!

WATCH: Obama POLITICIZES & Lies About GUNS During #Dallas Police Memorial … Did THIS Offend You?

RACE BAITER IN CHIEF: Obama Says Police Are Targeting ‘Poor Blacks’ In Incidents ‘At Least Once a Week’

OBAMA TO POLICE: ‘I’ll Give You Tanks, But You Can’t Be Racist’

Dear CNN: Obama Gives Hypocritical Speech In South Africa — Are You Going To Call Him On It?