The media near lost their minds over the Axios Trump interview. Trump pointed to a different data set than the hit-piece reporter did and (gasp!) said ‘it is what it is’ when facing the reality of Chinavirus numbers.

‘It is what it is’ is easily enough understood. There are things in this world called ‘brute facts’. You can’t wich them away. You can only face them or bury your head in the sand and hope they don’t bite you in the ass.

Rush shared some thoughts on what happened.

[Explains why radio and the ditto cam are not ideal for most visually-presented information, then explains that he thinks he’s found a way to explain the information.] 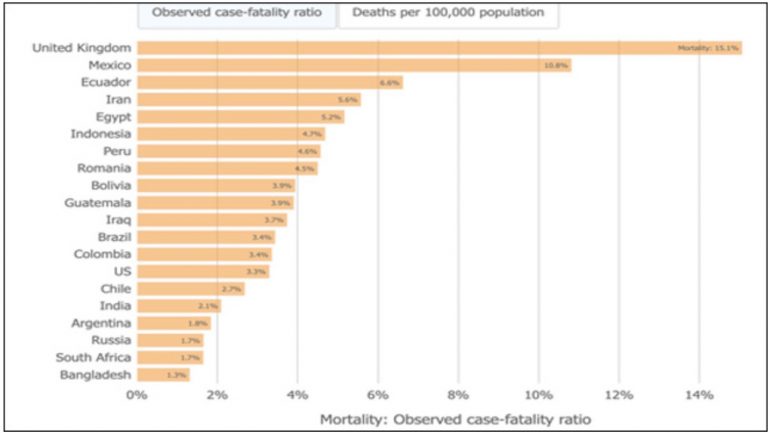 But the chart that I have, I found a way to put it into words. It shows that Trump was using actual numbers from Johns Hopkins. And, you know, we can link to the Johns Hopkins website at RushLimbaugh.com. We have in the past. You could go to the Hopkins site and you can see what Trump is talking about. It’s not hard. Trump is the one that’s actually being scientific here.

And even in the United States we can’t get a consistent way. We learned yesterday that the hospitals are now admitting that there’s money to be made in every death that can be chalked up to COVID-19. Remember the controversy we had in Florida where 300 different testing sites, testing locations were reporting 100 percent positives?

In other words, everybody that came in tested positive for COVID-19. It’s not possible. And yet they were reporting it at 300 different sites. So the same thing happens with the death rate. They’re reporting people dying from COVID-19 even if they haven’t died from it, but if they’ve got it. If they die of kidney failure, if they die of diabetes, if they die of cancer but they also have COVID, guess what? They’re said to have died from COVID. 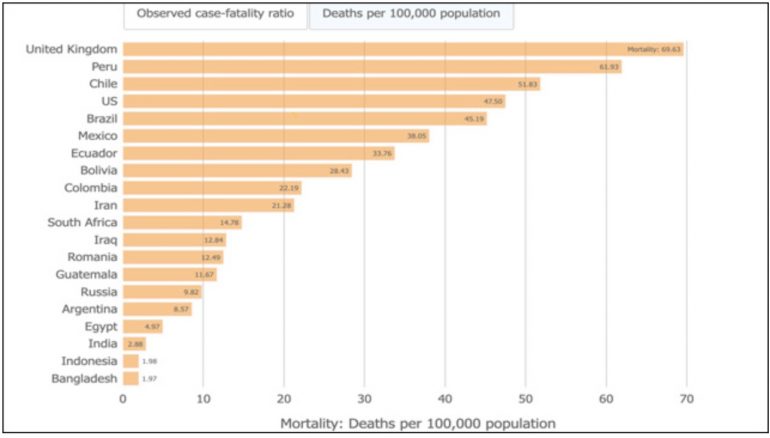 Why? Well, there’s a bunch of reasons, A, there’s money in it. B, there’s politics in it. Right now the more people dying of COVID, the better for the Democrat Party. Who’s reporting these numbers? Who is in charge of reporting and interpreting these numbers? The Drive-By Media is. And if they want the number of deaths associated with COVID-19 to go up and rise, they can do that and then they can blame it all on Trump.

And when Trump comes along and says, “Hey, it is what it is,” the number of deaths, the number of cases. He has no other choice but than to look at it for what it is. He has no choice but than to look at it as it is. He’s the president of the United States. He can’t wish it away. And that’s not what he’s trying to do with positive thinking. Not trying to wish it away.

So, at any rate, in medicine and science they always talk about the case fatality rate, the death per 100,000. It’s a tough thing to do because of the reporting in terms of cause of death, countries differ greatly in this. The United States and the U.K. are near the top of this chart because they count people who never even tested positive as dying of COVID when other countries do not. Why are we doing this?

So of course the media wants that particular chart used. And Trump is not looking at that chart. The fatality-per-case chart shows that the U.S. is near the bottom, which is good. Fatality-per-case is what Trump is looking at. You take the number of cases of COVID versus how many people die from it, that’s what Trump is looking at. That’s where he says progress is being made. The fatality rate is coming down. The death per capita puts us, along with the U.K., at the top the way Axios and the media is looking at it. Death as a percentage of population, per capita.

What does that tell you? There’s different ways of looking at it, but the case fatality rate is far more indicative. You got X-number of people who report testing positive. How many of them die? That’s what you want to know. The per capita rate tabulates the number of deaths compared to the whole population, including people that have not tested positive for it.

The Left has a narrative they’re shooting for.

They want us to think that American bodies are being stacked up like cordwood, worse than any other country on the planet and that it is the president’s fault.