Talcum X was cyberbullying the Kenosha Police Department and Twitter says that was totally fine.

Shaun King is well-known as a “doxxing vigilante” for publishing the names of individuals that he thinks are involved in what he deems racially-based crimes on his widely-followed social media accounts.

In June 2019, left-leaning news organization Mic interviewed King about his public shaming on social media and what happens when he gets it wrong.

Talcum X (unsurprisingly) lied and said that he’s “never misidentified someone of racism or police brutality.”

(Video at the end of this article debunks King’s claim.)

In the days following the shooting of Jacob Blake in Kenosha, Wisconsin, the prominent Black Lives Matter activist who cosplays being a Black man was publishing the names of random Kenosha police officers demanding that the shooter be named.

[EDITOR’S NOTE: ClashDaily has posted screenshots of the tweets with the names of officers blacked out. We have also chosen not to link to the Twitter thread naming the officers. We have done this to protect the officers named as well have images of the tweets available just in case King suddenly finds himself a conscience and deletes them.] 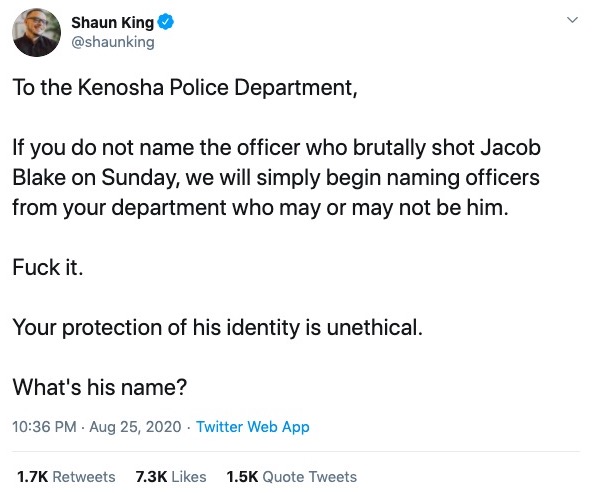 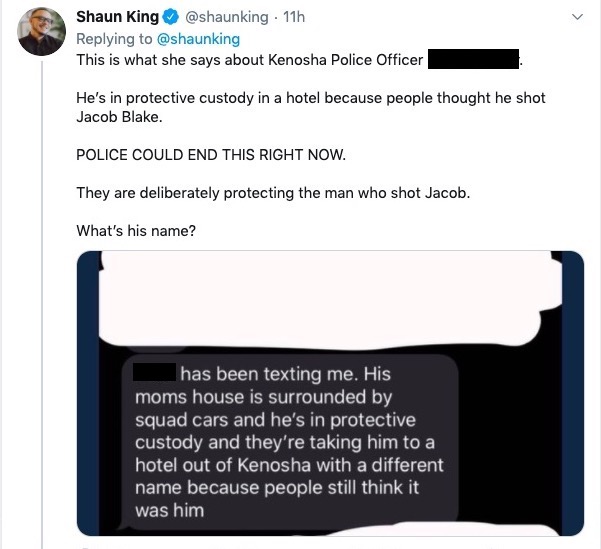 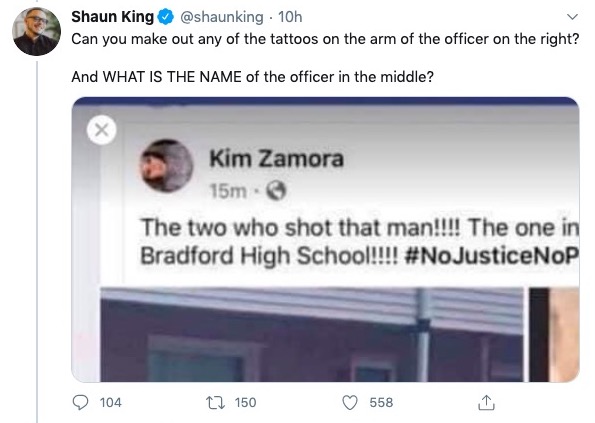 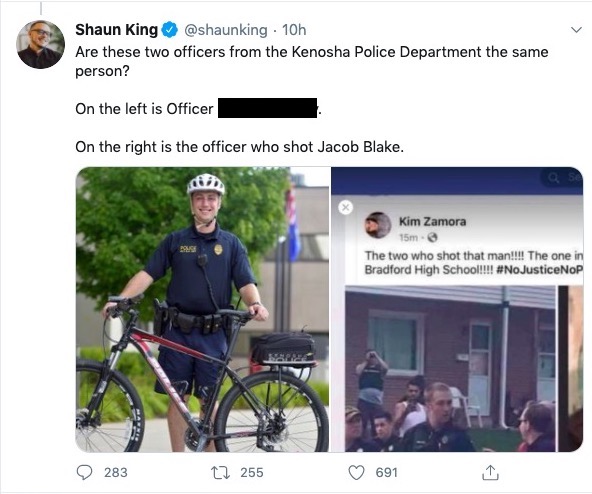 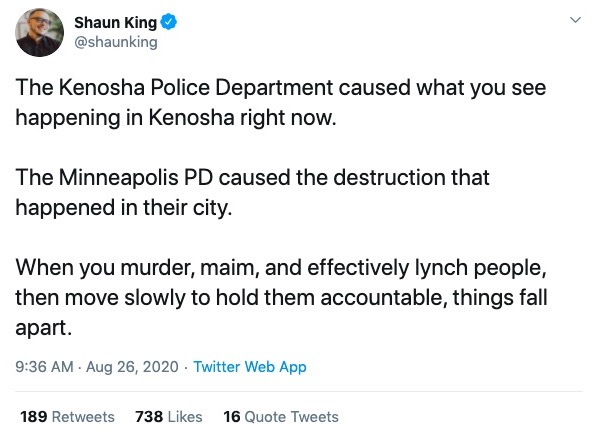 This kind of thing would normally be considered intimidation or at the very least cyberbullying the police to do as he says or he’ll send a mob to harass them.

The Daily Wire was told by Twitter that simply naming the officers wasn’t a violation of their rules. “The Tweet you referenced is currently not in violation of the Twitter Rules” was the response when a Daily Wire reporter pointed out King’s tweets naming Kenosha Police Officers.

Twitter did not immediately respond to a follow-up question regarding the possibility of King following through on his threat, and if those tweets baselessly naming police officers would be flagged as potential misinformation.

This really shouldn’t be surprising. We’ve seen the leftist bias by Twitter’s “fact-checkers.”

Twitter has labeled a meme posted by the President “manipulated media” and kicked the Meme Lord who made it off of their platform.

Recently they allowed a racial slur to trend after several black Trump supporters spoke at the RNC.

But you’d think that the folks who are quick to block parody and satire accounts like The Babylon Bee might want to take the actions of a notorious vigilante doxxer seriously. As it is, it’s curious why he is still permitted to have a platform when his tweet caused a man to commit suicide, but Carpe Donktum has been permanently banned for using a CNN clip.

What a world we live in.

Mike Cernovich tweeted out several instances where King has been wrong in his doxxing.

Shaun King, who led a rape hoax against a police officer, is now admitting he will begin falsely accusing Kenosha police officers as being responsible for the Jacob Blake shooting. pic.twitter.com/PcqQOEkNpe

Tonight on Twitter Shaun King is openly admitting that he will falsely accuse police officers of the Jacob Blake shooting.https://t.co/cUmbBQ2ZpY

Posting the name of police officers in the shooting of a black man in these racially intense times is dangerous.

Remember how Spike Lee posted the wrong address for George Zimmerman after the shooting of Trayvon Martin and an elderly couple had to leave their home after being harassed and threatened by the mob?

Some of these “protesters” are clearly disturbed:

Just imagine what these unhinged nutters would do if they thought that they’d found the guy that they think “hunted down an innocent black man” and shot him?

Crazy people will just show up and put these officers and their families in danger.

Shaun King is the King of cancel culture, and he’s been wrong several times with disastrous results. Innocent people have been hurt. One man, Robert Paul Cantrell, was in jail on robbery charges, killed himself in his cell because King had falsely accused him of murdering Jazmine Barnes, a 7-year old black girl, calling Cantrell a “racist, violent a**hole” which led to his family receiving a torrent of hate and death threats.

This man still has a Twitter account, and his doxxing is acceptable because it’s not including things like a personal address or a social security number.

That’s why you should be very careful on social media. Leftists can go after anyone and Twitter will turn a blind eye, even if it puts innocent men, women, and children at risk.