The Great Russian Collusion Hoax that has been pushed by the Media (D) for four years was the brainchild of the Hillary camp and Obama, Biden, John Brennan, and James Comey all knew about it.

According to declassified information on Thursday from Attorney General William Barr, the primary source for the Steele Dossier — which was the premise for the FISA warrants to begin surveillance of the Trump campaign — was actually a Russian national who was under investigation for suspected contact with Russian intelligence officers.

The Federalist covers that here:

In other words, the primary sub-source, now known to be Igor Danchenko, who is a Russian national with a checkered past, was investigated for being a Russian agent.

The documents further show that those running the Crossfire Hurricane investigation, which relied on the fake Steele dossier deriving its information from the sub-source, knew that Danchenko had been under a counterintelligence investigation. Federal officials pushed forward with their deep-state operations anyway as part of the conspiracy theory that the president was serving as an undercover agent for the Russian government.

Late in the day on Tuesday, just hours before the first Presidential debate, Senator Lindsey Graham (R-SC) released a declassified letter he received from the Director of National Intelligence (DNI) John Ratcliffe regarding the FBI investigation into Crossfire Hurricane.

What the letter says is absolutely explosive.

The Director of National Intelligence (DNI) declassified information indicating that former President Obama’s administration knew of Russian allegations that former Democratic presidential nominee Hillary Clinton was attempting to tie Trump to the Russia and distract from her email scandal before the 2016 presidential election.

The declassified information doesn’t offer specifics on the intelligence but does reveal that former CIA Director John Brennan’s handwritten notes show that he briefed Obama on the information. According to DNI John Ratcliffe’s letter, it included the “alleged approval by Hillary Clinton on July 26, 2016 of a proposal from one of her foreign policy advisors to vilify Donald Trump by stirring up a scandal claiming interference by Russian security services.”

The letter reads as follows:

In response to your request for Intelligence Community (IC) information related to the Federal Bureau of Investigation’s (FBI) Crossfire Hurricane Investigation, I have declassified the following:

As referenced in his 24 September 2020 letter to your Committee, Attorney General Barr has advised that the disclosure of this information will not interfere with ongoing Department of Justice investigations. Additional declassification and public disclosure of related intelligence remains under consideration; however, the IC welcomes the opportunity to provide a classified briefing with further detail at your convenience.

Here is the letter: 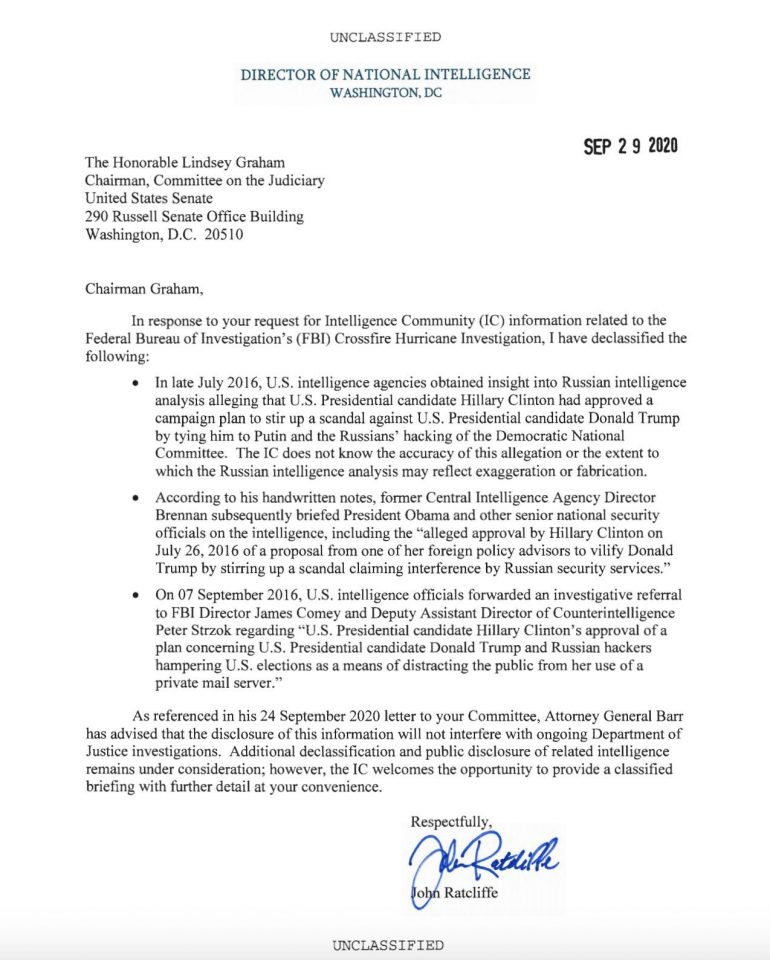 Don Jr. picked up on the letter right away.

OMG???JUST DECLASSIFIED: The Russia hoax was Hillary’s plan, and the Obama-Biden White House was briefed on it. pic.twitter.com/ytquclKKg1

We now know the Steele dossier was entirely a product of Russian agents and intel officials.

Today's declassification confirms that from the beginning, the FBI knew its anti-Trump investigation was based entirely on Russian disinformation. Brennan and Comey were personally warned. They responded by fabricating evidence and defrauding the courts. https://t.co/WduEKYOAPg

Several members of the Partisan Presstitutes and Democrats — but I repeat myself — were dismissing this as “Russian disinformation” laundered by the DNI and peddled by the Chair of the Senate Judiciary Committee. Which is truly astounding since they were the ones quick to believe the infamous Steele Dossier — with the claims of Russian prostitutes peeing on a hotel bed — as the absolute Gospel Truth.

Here is the Communications Director for Senator Mark Warner (D-VA) retweeting the skeptical tweet of the Congressional correspondent for POLITICO.

This is Russian disinformation.

Laundered by the Director Of National Intelligence and Chairman of the Senate Judiciary Committee.

The DNI fired back. Chuck Ross from The Daily Caller reported on the new statement. It reads, “To be clear, this is not Russian disinformation and has not been assessed as such by the Intelligence Community. I’ll be briefing Congress on the sensitive sources and methods by which it was obtained in the coming days.”

FBI statement: “The FBI has been, and will continue to be, fully cooperative with all congressional inquiries, and Department of Justice reviews, into the Crossfire Hurricane investigation.”

Besides, this seems to be consistent with the Democratic Party’s commitment to “projection” — accusing Republicans of what they themselves are.

It would seem that the entire Russiagate probe was merely a political smear perpetrated by the Deep State.

In a WikiLeaks dump of emails, Jennifer Palmieri asked who was in charge of the “Trump Swift Boat Project.”

The Hillary team was calling it “swiftboating” Trump.

Here's the moment on July 24th, 2016, when Robby Mook planted the Russia collusion hoax. This is what started it all. As we just learned from @DNI_Ratcliffe, this was immediately followed by Hillary pushing the fabricated scandal that Trump was working with Russia. pic.twitter.com/mRlLtk2CJ4

An archive of Hillary’s campaign website dated August 8, 2016 pushes a Trump-Russia conspiracy with “5 Questions Every Voter Should Ask About Donald Trump’s Bizarre Relationship With Russia.”

Here are the questions:

These questions are really awkward in light of the latest revelations.

Hillary used this same Russian disinformation during the 2016 Presidential debates and accused Trump of encouraging espionage against Americans which she claimed was “designed to influence the election.”

The unbelievable gall of that woman!

When Trump called her “Crooked Hillary” he had no idea how right he was.

They were all in on the big lie together

This isn't news to anyone paying attention. Hillary paid for the Russian disinformation, Obama-Biden used it to spy on President Trump, and Hillary used her bogus dossier DURING the debatespic.twitter.com/5EhEUD81SX

The Media (D) is going to bury this because they’re complicit in the biggest political scandal in American history. And they wonder why Trump calls them “Fake News.”

The last four years have been lies. Thanks fake news media.