The Media(D) is doing it again. They’re ignoring some massive gatherings while condemning others.

President Trump has been widely criticized for “putting peoples’ lives at risk” for holding rallies with an election coming up in just over 40 days.

But not much has been said about the “mostly peaceful protests” that have been going on for months now. Some medical “experts” have completely beclowned themselves by supporting massive anti-racism protests but wear a mask when having sex.

Massive funerals were held for George Floyd and the late Congressman Elijah Cummings and there wasn’t a cursory mention of the pandemic.

The death of Justice Ruth Bader Ginsburg is another one of the exceptions where COVID-19 precautions don’t matter.

Since news of the “Notorious RBG” was reported on Friday evening, people have been gathering in front of the Supreme Court building to pay their respects. Thousands have gone to place flowers, candles, bring messages of gratitude, and at times, hundreds have come to mourn together. Massive crowds singing, chanting, and shouting.

This has been widely reported, but not a word about the possible spread of the virus.

The grounds of the Supreme Court bloomed into a memorial to Justice Ruth Bader Ginsburg, drawing thousands who came to honor and remember the trailblazing icon.

Mourners began arriving at the high court soon after news of her death came Friday evening, growing to a crowd of more than 1,000 who cried, sang and occasionally applauded. On Saturday, as the sun rose, dozens of people stood in silence as a flag flew at half-staff.

And they kept coming by the hundreds. Bouquets, signs and chalk messages honoring Ginsburg multiplied by the minute. Joggers stopped mid-run, bikers paused and rested on their handlebars, and mothers from across the D.C. region brought their daughters to pay tribute to the pioneering liberal lawyer and advocate for equality. Even as lawmakers began to clash over when she would be replaced, the space outside the court was mostly one of quiet reflection . By nightfall, thousands packed the plaza, holding candles and listening to speakers.
Source: Washington Post

Here’s WaPo‘s headline, by the way:

The Passing of #RuthBaderGinsburg: Many emotions and tributes outside the #scotus building tonight following the passing of the Supreme Court justice. Hear what #rbg meant to some of the people who came out….@wusa9 pic.twitter.com/NFNepZO83k 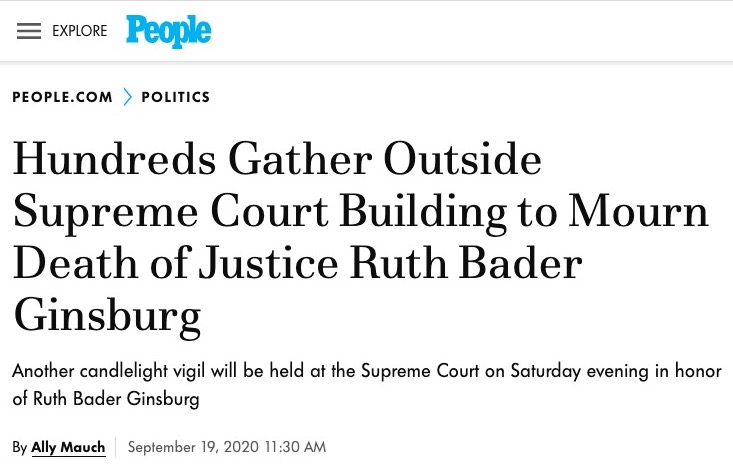 The crowd was led in the Kaddish, the Jewish mouring prayer.

A recitation of the Kaddish, the Jewish mourners prayer, outside the Supreme Court building. pic.twitter.com/OcNWQCQaHj

Outside of US #SupremeCourt Building. rest in piece #RGB ?? @PoPville pic.twitter.com/a2HIs5pRsv

The crowd at the RGB vigil is chanting “we will fight” and it is echoing from the Supreme Court building, making it sound like the people’s voices are coming from the court itself. pic.twitter.com/LPxFthCpWE

Thousands pay their respects Saturday afternoon to Justice Ruth Bader Ginsburg outside the Supreme Court building less than 24 hours after her death. pic.twitter.com/zXzdWuCyYu

Vigil for #RBG at #SCOTUS. The song ended with “Thank you Ruth!” #RuthBaderGinsburg #RIPRGB #WashingtonDC pic.twitter.com/qlYOgEgEiB

It seems like this could be one of those “super-spreader” events the way that the left assumed that the Sturgis Biker Rally was.

How do we take these clowns seriously?

Many people can’t fully open their business, go to church, attend in-person classes, or visit their family members–but thousands of people can gather to mourn a woman that they didn’t personally know.

Lives are being destroyed and if you complain, you’re vilified as “selfish” because you “want people to die.”

But these people…well, they’re lauded for caring so much about the death of an 87-year old Supreme Court Justice.

Our cause matters. Your school or church doesn't. We will gather in crowds and the media will praise us.

This is why you lost public trust. You clowns. You idiots.

If trust in the media is at an all-time low, it’s well-deserved. They did it to themselves.

The DC Criminals Are At It Again – Depriving Citizens Of Their Rights Under The Guise Of Protection
January 18th, 2021 Sons of Liberty Media

Richard Grenell claims ‘she’ will be ‘shadow president’ — and he does not mean Kamala
January 18th, 2021 Liberty Unyielding