Gaffigan, who normally keeps his comedy clean made the jump into full profanity-laced anti-Trump rager about a month ago. And there has been no looking back.

For a brief window of time, when he was good for their ratings, the Left LOVED Trump. Then it became clear that he was going to be the Republican nominee. From that moment forward, the left has thrown everything they could against him.

Instead, his attackers were left holding the bag as one after another of the people arrayed against him crashed and burned.

How about Comey and Brennan?

Or what’s-her-face — Don Lemon’s drinking buddy on NYE shows? The one with the severed Trump head?

One after another, Trump outlasts his critics. Just ask the crew from that Mueller investigation. Or Peter Strzok and his philandering side-chick.

But Gaffigan, who ‘generally keeps politics out of his shows’ and is known as the ‘clean’ comedian streamed a stream of profanities that was absolutely indistinguishable from any other self-righteous Hollywood twitter invective.

Here’s his (with a valid criticism of reply as context):

He’s been piling it on higher and deep as we moved forward from the RNC.

CNN seems to think this is the death knell for Trump. (Cue one of those ‘walls are closing in’ montages from all the previous times they though the had the President dead to rights.)

Before Trump supporters dismiss Gaffigan as a typical Hollywood liberal or a Never Trumper, they should realize that in some ways Gaffigan may be emblematic of the so-called “silent majority” that Trump believes will lead him to victory this November.
The phrase “silent majority” comes from Richard Nixon’s 1968 presidential campaign, where he invoked it to describe what he believed was a large group of Americans who quietly supported his proposals, especially with regards to the Vietnam War. Trump similarly hopes there’s a large swath of people on his side that aren’t speaking out or are not reflected in the polls. —CNN

Yeah. I don’t think ‘flyover country’ needs to be taking political advice from a network who employ such philosophical heavyweights as Don Lemon and Chris Cuomo to push Mark Zucker’s daily 9 am talking points.

The network of people who went on record backing Antifa, and openly musing that we need to burn down the system and abolish the electoral college can sit this one out.

Maybe watch some old clips of election night 2016 to remind yourselves exactly why your opinion means squat to us. If that’s too painful a memory, how about all those ‘Putin’s puppet’ accusations you spewed — which were based on a Hillary-backed dossier provided to Steele by a sub-source who was known to be a Russian Spy.

But what about your allegations that Gaffigan will hurt Trump?

He’s already got money and fame. This gains him the acceptance of being ‘on board’ with all the other ‘cool kids’ who’s one-note song is their incoherent rage against Trump. 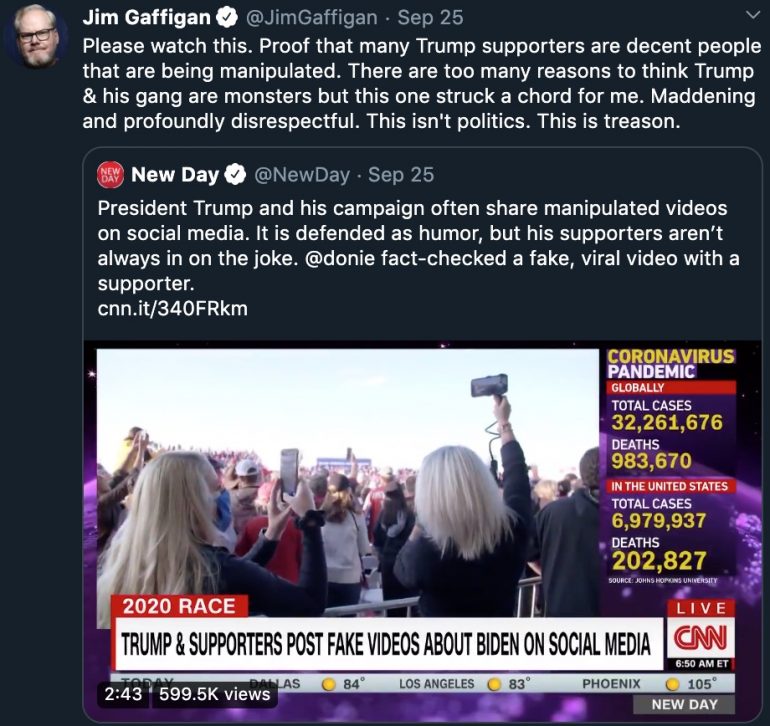 All that really tells us is that he feels safer blending in with Hollywood and regurgitating every talking point they make then he does about challenging the official narrative and thinking his way through it.

For one thing, blaming Trump for COVID doesn’t explain why the worst per-capita death rates just ‘happened’ to cluster in Blue states, while places like Florida have a much better record, despite larger population and more vulnerable demographics.

If you like calling out misinformation and manipulation, try reading the full ‘very fine people’ transcripts, including where Trump denounces white supremacists, and then call out CNN, Joe Biden and all the others for building up a Trump-Is-Racist narrative for two years. THAT would actually take guts, and demonstrate decency.

Or, maybe, ask America why an unsubstantiated (and widely-discredited) rumor that Trump said mean things about dead servicemen finds its way into the news reports, and Campaign ads, but that same media runs interference protecting him from a video in which Joe Biden calls his military audience ‘stupid bastards’ and a ‘dull bunch’ to their face.

Dean Obeidallah, the writer from both CNN and the Daily Beast (what a surprise) and a personal friend of Gaffigan (another ‘shock’) seems to think that Gaffigan coming out and criticizing Trump is proof positive that the ‘moderates’ have chosen Biden over Trump.

Go ahead and keep telling yourself that, Dean.

You guys also thought you had Trump’s number when Pelosi and her fancy pens signed those impeachment documents. We all saw how that worked out.

You don’t realize it, but you ARE the punchline.