Kyle Rittenhouse is the 17-year-old whose name made national news because of a viral video clip that captured the moments where he fired his rifle at participants of the riot.

Accusers are calling his action provocative and murderous.

Defenders are calling his actions an obvious instance of self-defense.

The guy whose bicep was blown off has openly regretted NOT killing Kyle when he had the chance.

And now Big Tech has weighed in.

Facebook has decided that Kyle qualifies as a ‘mass murderer’ and is censoring posts that support him.

Facebook will remove posts that it deems to be in support of alleged Kenosha shooter Kyle Rittenhouse.

“We’ve designated the shooting in Kenosha a mass murder and are removing posts in support of the shooter,” Facebook said in a statement to Breitbart News. The statement came after conservative commentator Mark Dice said a video he posted was removed and that Facebook was “threatening to delete my entire account.”

Here’s the screenshot of what they found ‘objectionable’. 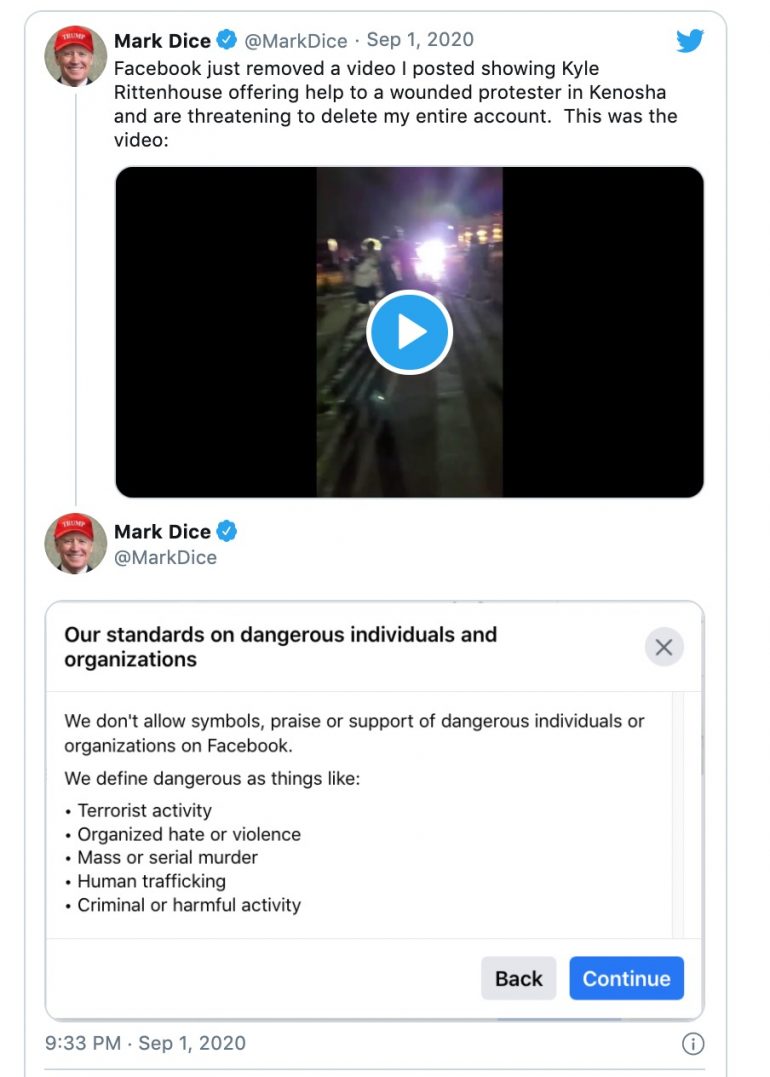 Wouldn’t want any evidence that might explicitly contradict the unfounded accusations that Kyle is a racial bigot and ‘mass murderer’ out there. It could potentially clear his name.

And what possible right does a minor have to clear his name, once the Zuckerberg Court has decided his guilt?

The right to be presumed innocent? To a fair trial?

Oh, please. Where do you think you live… America?

Haven’t you heard? The rights of an American citizen don’t apply in Zuckerberg’s digital kingdom.

Well, since Kyle is represented by the same lawyer as Nick Sandmann was… we shall soon see about that.

Painting an unconvicted minor as a ‘mass murderer’ and actively blocking stories that would clear his name sure looks like defamation to us.