In a report, the School Resource Officer called it a “life or death emergent situation” and that it could “potentially lead to criminal charges in the future.” Seriously?!

In a bizarre incident that occurred last week in Colorado, seventh-grader, Isaiah Elliott, was suspended for playing with a toy gun with his friend during their virtual art class.

A couple of 12-year olds were bored during class and were goofing around. The difference is that they’re not in a traditional classroom setting, but in the home of one of the boys and had access to his toy gun collection. This seems simple–reprimand them for playing with toys during class and move on. Seems open and shut, no?

That’s not what the teacher did, however. Instead, she reported him to the authorities–both the school and law enforcement.

His parents are furious with the heavy-handed response from the school which didn’t just include suspension, but also a visit from a local deputy to conduct a “welfare check” on the boy without contacting them first.

In late August, the seventh grader was attending an online art class when a teacher saw Isaiah flash a toy gun across his computer screen. The toy in question is a neon green and black handgun with an orange tip with the words “Zombie Hunter” printed on the side.

The teacher notified the school principal who suspended Isaiah for five days and called the El Paso County Sheriff’s Office to conduct a welfare check on the boy without calling his parents first.

“I didn’t know what was going to happen. I didn’t know if they were going to bust down the door,” said Isaiah. “My heart was beating super fast.”

His parents have raised their concerns over both the overreach of the school and because they are afraid of an interaction with police in a time of “racial tension.”

The Media(D) has successfully terrified black families into fearing for their lives during a welfare check from law enforcement. Good job, Presstitutes! Narrative successful.

Isaiah wasn’t alone when he was playing with the gun, he had a friend over. It’s unclear if his friend was black, but it is a notable absence in the reporting of this story.

Watch the report on Fox 31 Denver:

But there’s a bit more to this story.

According to the report, the teacher said that she “thought” it was a toy gun but wasn’t sure.

Here is the gun: 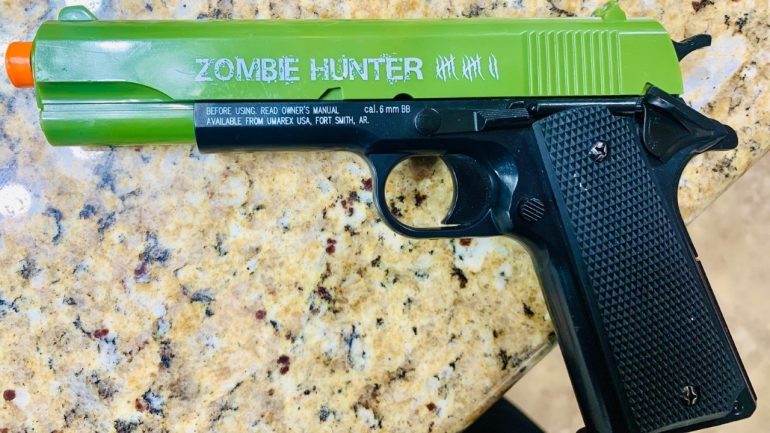 She couldn’t tell that was a toy?!

You’d think her observational skills would be a bit better.

It seems that the virtual class was recorded and Deputy Steven Paddack of the El Paso County Sheriff’s Office, who is the school resource officer for Grand Mountain, was able to review the incident. The problem is that Isaiah’s mother, Danielle Elliott, doesn’t recall the school asking for parental consent for the students to be recorded.

Danielle explained that the school requires students to keep their web cameras turned on during virtual learning for attendance purposes. She was surprised to learn that the web camera sessions are recorded. Elliott doesn’t remember giving consent to the district to record the class.

Deputy Paddack put the fear of God into the boys for what should have been a non-issue and has told them that if they continue with behavior like this it could lead to charges in the future.

Isaiah and the other student were not charged in the incident. Deputy Paddack wrote that he explained the seriousness of the situation to the students and informed them that they could be charged with Interference with an Educational Institution.

Danielle said the ordeal was traumatizing for Isaiah. She’s since removed him from the school and is looking to enroll elsewhere.

Isaiah has been removed from the school by his parents and they are looking for a new school for him.

This whole episode is so wrong on so many levels.

There is so much fear out there and the Media(D) is complicit in peddling it–fear of a school shooting, fear of a pandemic, and fear of racism.

What has America become?!