It’s never a good thing when the actions of a reporter become the headline.

In case you missed it, on October 8, C-SPAN’s political editor, Steve Scully, who was supposed to moderate the second debate tweeted out to Trump-hater Anthony Scaramucci.

President Trump had been critical that Scully was moderating the debate because he had been an intern to Joe Biden, and had retweeted an anti-Trump article by New York Times article by David Brooks titled, “No, Not Trump, Not Ever.” 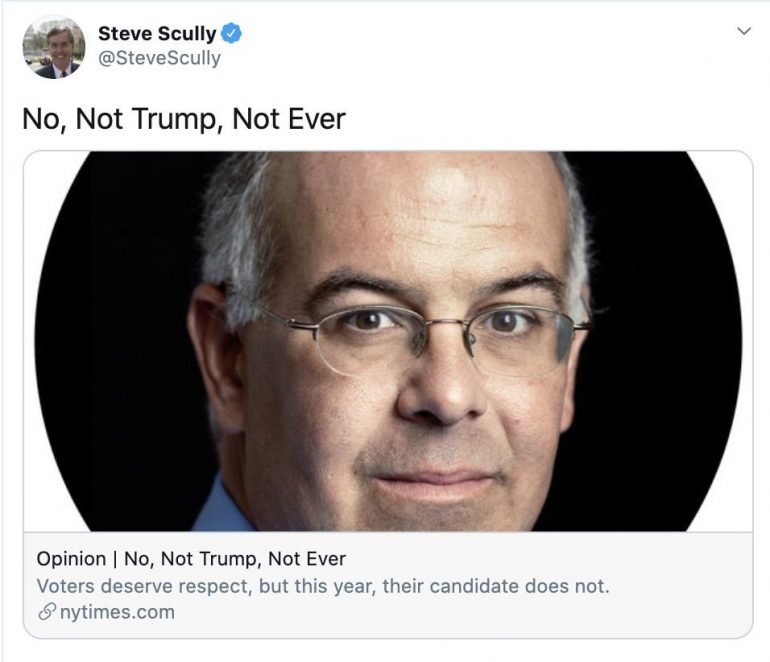 Scully, who seemed to be trying to contact Scaramuci through a private message instead tweeted his question publicly.

It was quickly picked up by conservative political pundits and reporters on Twitter who were still stinging from the absolutely awful first Presidential debate debacle where Chris Wallace was essentially debating Trump himself while lobbing softball questions at Sleepy Joe. It was clear that the remaining debates were going to be absolute sh!tshows, and monitoring Steve Scully’s account seemed…prudent.

They got more than they had expected…

Steve Scully, the moderator for the next debate, has now deleted this tweet where he appears to be coordinating with Scaramucci and posted publicly instead of DM. pic.twitter.com/jKvGivOSHM

Steve Scully, the second Debate Moderator, is a Never Trumper, just like the son of the great Mike Wallace. Fix!!!

.@SteveScully, the Never Trumper next debate moderator, got caught cold. Pulled out the old, “I’ve been hacked”, line. That never works. His bosses are furious at him as he’s lost all credibility!

Scully then told C-SPAN and the Commission on Presidential Debates that his account had been “hacked.”

Commission on Presidential Debates (CPD) co-chair Frank Fahrenkopf tells me that he was told debate moderator Steve Scully's Twitter account was hacked but adds he has no direct knowledge.

This Steve Scully tweet isn't from a hacker… it's a tweet from a biased "journalist" who doesn't know the difference between tweeting and DMS. pic.twitter.com/yXHlIfXYxY

Are you kidding me. Steve Scully the former Biden intern and moderator of the next debate thinks he’s DMing… but he’s doing it out loud.

Yea, totally not a setup. Journalism is dead. https://t.co/b07swOAkKg

I don't care how "good" of a person Steve Scully is. He's a debate moderator who interned for Joe Biden, tweeted out "not Trump, not ever," and now got exposed to have been coordinating with Scaramucci and is blaming "hackers."

There is no coming back from this. He's done. pic.twitter.com/Lcx35feoL2

I have obtained exclusive photos of the dudes that hacked Steve Scully's account pic.twitter.com/D7fSWKkehe

Dear @cspan & @SteveScully, as a former FBI Special Agent, I can honestly say I’ve never seen a social media account hacked for the purpose of sending one single tweet to a public figure nobody cares about. However, lying to federal authorities is a felony. ?@realDonaldTrump https://t.co/ijbPlE4N57

On Thursday afternoon, the news broke that Scully was indeed lying about being hacked. He came clean and was suspended indefinitely by C-SPAN.

C-SPAN suspended its political editor Steve Scully indefinitely Thursday after he admitted to lying about his Twitter feed being hacked when he was confronted about a questionable exchange with former Trump aide Anthony Scaramucci.

The news came on the day of what was supposed to be a career highlight for the 30-year C-SPAN veteran. Scully was to moderate the second debate between President Donald Trump and Democrat Joe Biden, which was canceled after Trump would not agree to a virtual format because of his COVID-19 diagnosis…

He had been frustrated by Trump’s comments and several weeks of criticism on social media and conservative news outlets about his role as moderator, including attacks directed at his family, he said.

“These were both errors in judgement for which I am totally responsible for,” Scully said. “I apologize.”

He said he let down his colleagues at C-SPAN, fellow news professionals and the debate commission. “I ask for their forgiveness as I try to move forward in a moment of reflection and disappointment in myself,” he said.
Source: Associated Press

The salt in the would for Scully has got to be this one tweet from the President when the news broke.

I was right again! Steve Scully just admitted he was lying about his Twitter being hacked. The Debate was Rigged! He was suspended from @cspan indefinitely. The Trump Campaign was not treated fairly by the “Commission”. Did I show good instincts in being the first to know?

There’s still one outstanding question, however…Scully claimed that the FBI was investigating the hacking. Does that mean he filed a false report with the FBI?!

Steve Scully claimed he filed an FBI report after being "hacked" but just admitted that he was not hacked.

Conservatives on Twitter have been lambasting the journos that were rallying to defend Scully.

How mad are you right now that C-SPAN just suspended former Biden intern Steve Scully after determining that he lied about being hacked to cover up the fact that he was secretly colluding with Trump-hater Anthony Scaramucci about how to go after Trump? https://t.co/oIvyNzt0ev

In his "apology," Scully blames Trump for Scully lying about being hacked.

It's a perfect microcosm of Trump Derangement Syndrome: journo who claims Trump is a liar immediately decides that collusion and lying about collusion are the antidode to Trump. https://t.co/8SpcTSv4aM

The behavior of social media tech giants and their comrades in the Media (D) is the October surprise.

C-SPAN and the Commission on Presidential Debates pushed an obviously false narrative about Steve Scully’s Twitter account getting hacked. Another serious blow to the media’s tattered credibility.

CSPAN’s lead reporter and a presidential debate moderator was caught colluding with Trump’s personal adversaries before the debate, and then he lied about being hacked.

Steve Scully’s lie was amplified by the media in a massive disinformation campaign.

Will @twitter now suspend anyone who spread the disinformation that Steve Scully was hacked even though he himself admitted it was a lie?

The news broke about Steve Scully 15 minutes ago and his name is trending. The name "Hunter Biden" magically didn't trend at all yesterday.

So this week is hand Trump all the last minute electoral ammunition you can find in media I guess.

They’re both fighting like hell to keep him from being reelected, and it’s getting pretty dirty.

We’ll find out soon enough if the American people fall for it.

HEY BEZOS: If Vote-By-Mail Is So Secure, Why Must Amazon’s Unionizing Vote Be In-Person?
January 24th, 2021 Clash Daily

Biden’s Presidency Will Be A Catalyst For Secession – And Perhaps Civil War
January 24th, 2021 DC Clothesline