The Department of Justice is finally filing a lawsuit against Google for using its dominance in online search and advertising to “stifle competition and boost profits.”

The DOJ lawsuit is to prevent Google from “unlawfully maintaining monopolies in the markets for general search services, search advertising, and general search text advertising in the United States through anticompetitive and exclusionary practices, and to remedy the effects of this conduct.”

One of the key points of the lawsuit is that the dominance of Google and its exclusionary agreements don’t give consumers choice.

The lawsuit alleges that Google has used its billions in advertising revenue to sign exclusivity agreements with cellphone manufacturers to ensure that their browser is the default search engine on devices. This works to maintain Google’s dominance and continue to funnel ad revenue back to them which they then use to sign exclusive agreements… lather, rinse, repeat.

According to the lawsuit, “For years, Google has entered into exclusionary agreements, including tying arrangements, and engaged in anticompetitive conduct to lock up distribution channels and block rivals.”

“American consumers are forced to accept Google’s policies, privacy practices, and use of personal data; and new companies with innovative business models cannot emerge from Google’s long shadow. For the sake of American consumers, advertisers, and all companies now reliant on the internet economy, the time has come to stop Google’s anticompetitive conduct and restore competition,” it says.

“Largely as a result of Google’s exclusionary agreements and anticompetitive conduct, Google in recent years has accounted for nearly 90 percent of all general-search-engine queries in the United States, and almost 95 percent of queries on mobile devices,” states the lawsuit.

A Google spokesperson told Fox News: “Today’s lawsuit by the Department of Justice is deeply flawed. People use Google because they choose to — not because they’re forced to or because they can’t find alternatives. We will have a fuller statement this morning.”

The lawsuit has brought together lawmakers from both sides of the aisle.

“The Subcommittee’s investigation uncovered extensive evidence showing that Google maintained and extended its monopoly to harm competition,” said Rep. Cicilline in a statement. “It is critical that the Justice Department’s lawsuit focuses on Google’s monopolization of search and search advertising, while also targeting the anti-competitive business practices Google is using to leverage this monopoly into other areas, such as maps, browsers, video, and voice assistants.”

Senator Josh Hawley (R-MO) has been very vocal about Big Tech’s control over our lives.

“Today’s lawsuit is the most important antitrust case in a generation,” said Hawley in a statement. “Google and its fellow Big Tech monopolists exercise unprecedented power over the lives of ordinary Americans, controlling everything from the news we read to the security of our most personal information. And Google in particular has gathered and maintained that power through illegal means.”

Opposing Big Tech monopolies who willingly change their policies to work with the Chi-Coms to censor and target dissenters and push propaganda tossing aside the American value of Free Speech in order to increase their profits is actually bringing Americans together. 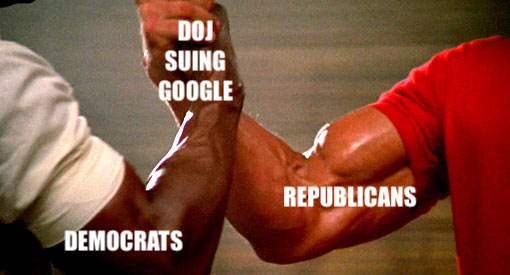