As chaos continues in the streets of major cities and leftwing agitators run wild, President Trump’s law and order message is resonating with voters.

A recent Harvard/Harris Poll shows that two-thirds of registered voters support law enforcement while support for Black Lives Matter is at 51 percent. Support for BLM has dropped in the past few months as waves of unrest and violence continue. 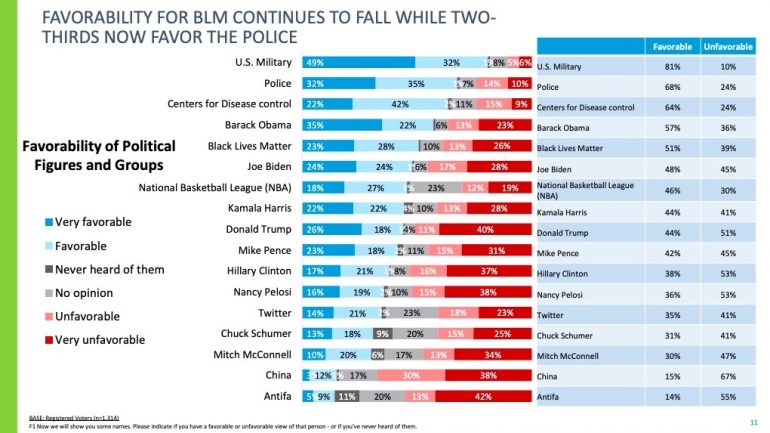 A new poll from Harvard University suggests the American electorate is receptive to President Trump’s messaging about law and order.

More than two-thirds of the 1,314 registered voters surveyed by the Harvard Center for American Political Studies/Harris Poll have a favorable opinion of law enforcement, compared with 51% for the Black Lives Matter movement.

The two have found themselves increasingly at odds this year after the death of George Floyd, a Black man being detained by a White Minneapolis police officer. Caught on video, Floyd’s death sparked nationwide protests and occasional violence, spurring harsh rhetoric from the White House.

Antifa — a loosely-knit movement opposing right-wing ideologies that has been a frequent talking point for the president — has just 14% approval.
Source: Fox News

That’s not all that the poll showed, almost three-quarters of respondents want to see tougher restrictions at the southern border to prevent the flow of illegal aliens, and the deportation of those who have come into the country illegally and have committed crimes.

Perhaps that’s why the GOP is doing so well with registering new voters in battleground states like Pennsylvania. In September, Republicans added almost 198,000 voters to the voting roll.

President Trump needs to continue to hammer Dems on the Law and Order message as well as going right back to what worked back in 2016 — securing the southern border.

Americans want safety and security and that’s not going to happen under a Biden administration.