Did you ever notice how the stories accusing Trump of being a bigot are not WRITTEN before he came down that escalator with political ambitions and an (R) after his name?

Sure you’ll find stories where his past actions are reimagined to presuppose he was guilty of this or that offense against Woke sensibilities, but that’s a different question.

Before 2015, there was nothing to be GAINED by calling him a racist. Did anyone do it back then?

The answer, of course, is no.

An inquisitive person might wonder why someone who has been so roundly denounced as a bigot might not have any stories written to denounce this soul-destroying aspect of his personality before political motivation to destroy a political rival entered into the picture.

Our press, being complicit in the efforts to destroy Trump, have exactly no curiosity about such issues.

Surely if he is a bigot NOW, when racial equality issues are so deeply ingrained in society, what was the President like back in the 80s, when racial issues were much improved over the 70s, but still working themselves out?

Is there any body of evidence we can look to for clues?

For anyone curious enough to look, there is, in fact, such a body of evidence. 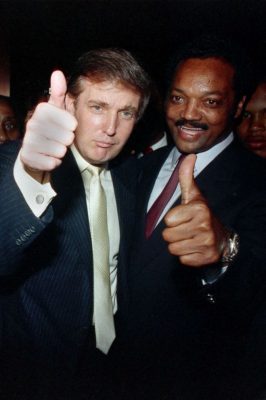 As a businessman, President Trump worked with the NAACP in 1987 and was named chairman of the New York Citizens Committee for their 78th NAACP Convention. In subsequent years he worked with Rev. Jesse Jackson’s Rainbow Push Coalition Wall Street Project where he attended and spoke two years in a row. In fact, President Trump donated space for the civil rights organization to raise awareness about the need for diversity on Wall Street.

Rev. Jackson said of Mr. Trump, he “created for many people a comfort zone when I ran for the Presidency, in ’84 and ’88. And [although] many others thought it was something laughable or something to avoid, he came to our business meeting here in New York, because he has this sense of the curious and a will to risk to make things better. So aside from all of his style and his pizazz, he is a serious person who is an effective builder of building for the builder people.”

Donald Trump had no problem working with diverse groups and people to get things done that would benefit the greater good. —Townhall

You remember that photo of him with Rosa Parks, and Mohammed Ali don’t you? 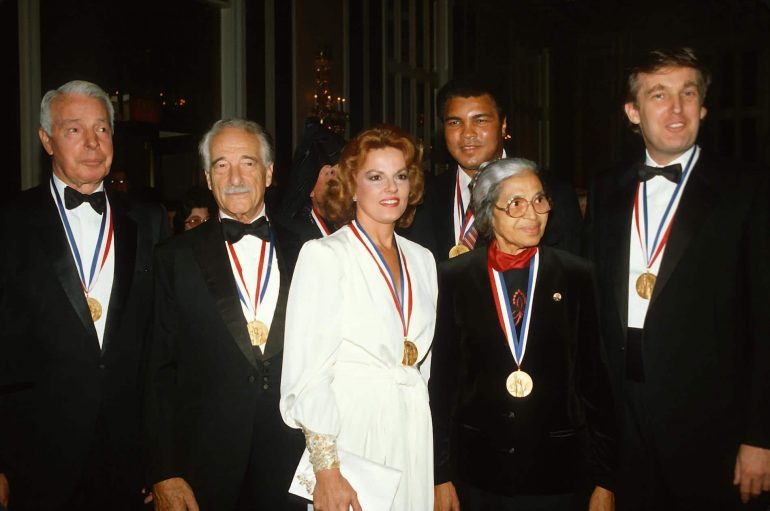 That was the Ellis Island Award. Even the partisan hacks at Snopes had to admit that was true.

Better still was what Snopes had to admit in this text:

“Patriotism, tolerance, brotherhood and diversity.” Heh. It must have near killed them to say it.

But surely, Trump has metamorphized into a bigot now. Right? I mean, the media hasn’t been lying to us all about THAT have they?

To be honest, there is more evidence against that claim than for it. And not just because we’ve debunked the ‘fine people’ lie six ways past Sunday either.

During the 2016 campaign, President Trump met with a group of black clergy in Trump Tower. After he won the election, the Trump Transition team followed the lead of the president-elect and held listening sessions with key black leaders from both sides of the aisle.

There was a major meeting of well over 100 black leaders and organizations like the NAACP, National Urban League, NOBLE, National Action Network, 100 Black Men, National Council of Negro Women, United Negro College Fund, and others held in Washington, D.C. There were meetings between the president-elect and Bob Johnson, Steve Harvey, Martin Luther King, III, Ray Lewis, and Kanye West.

When it came to criminal justice reform, President Trump and his administration worked with Van Jones and Kim Kardashian who amplified the work of the White House on the First Step Act and important clemency and pardon actions that helped Americans like Alice Johnson. When the White House reached out to Senator Kamala Harris about the First Step Act, sadly, she refused to return the phone call.

The Trump White House was willing to work with people like Robert F. Smith and John Hope Bryant when it came to ensuring that more resources were getting to those who needed it most during this global pandemic. Working with black-owned banks, CDFIs, and other organizations on the ground have led to well over 200 meetings, calls, and visits touching over 1,000 stakeholders from both sides of the aisle.

I am proud that black conservative organizations have had a seat at the table, I am proud that well known and up and coming black Republican leaders, like myself, have had a seat at the table. But I am most proud of the way the Trump White House has done what this president has always done, reached out, been unafraid to directly engage, and form unlikely political alliances to get things done for black America. —Paris Dennard, Townhall

We close with a question for andy moderates and Democrats who may read this:

What ELSE have we been lied to about?