These are not the sorts of warnings that are so easily blown off… these same people have accurately predicted mass violence initiated by other groups in the past.

A new academic paper studying the rise of violent, far-left extremist networks warns of the possibility of “attacks on vital infrastructure” and even a potential “mass-casualty event.”

The NCRI’s alerts have proved prescient in the past: the institute released a report warning of spikes in anti-Semitic extremism shortly before the October 2018 Tree of Life Synagogue mass shooting that left 11 people dead.– DailyCaller 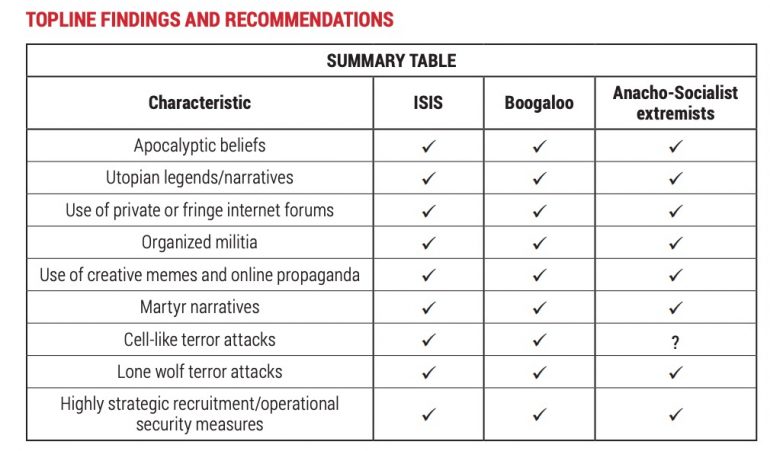 The NCRI report also points to coordinated demonstrations across the country on July 25, which devolved into riots in four cities.

“We found that distributed anarchist networks prepared, executed, and propagandized simultaneous rallies on July 25th across the United States in a coordinated campaign with the hashtag/code ‘#J25’ resulting in riots being declared simultaneously in four cities: Portland, OR, Richmond, VA, Eugene, OR, and Seattle, WA,” the report states.

he NCRI report says that left-wingers have martyrized Willem Van Spronsen, a self-identified Antifa member who died in a shootout with police in July 2019 after attempting to burn down an immigration detention center in Washington. — DailyCaller 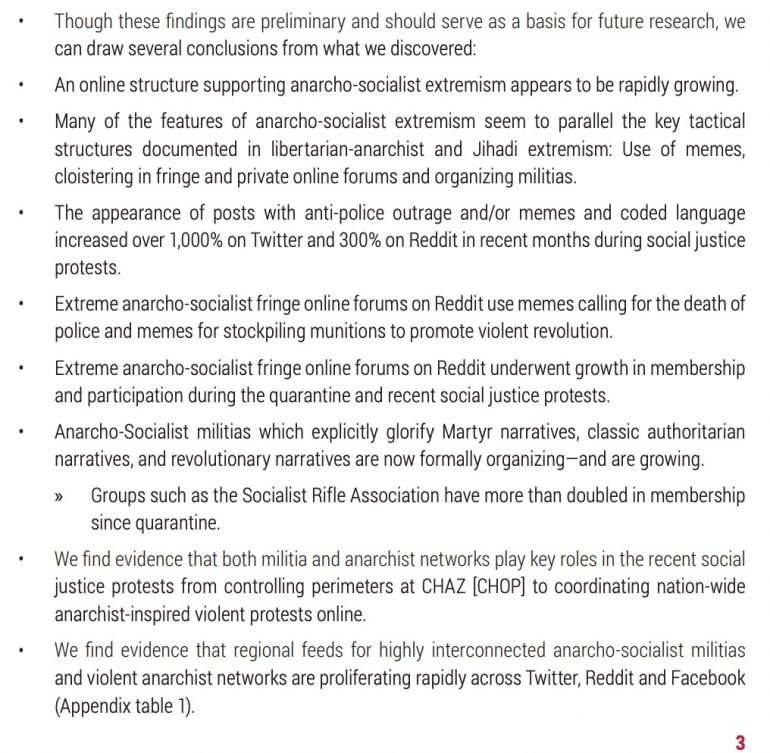 In case that list is hard to read on your device, here’s a partial summary of that latter list:

– We find evidence that both militia and anarchist networks play key roles in the recent social justice protests from controlling perimiters at CHAZ[CHOP] to coordinating nation-wide anarchist-inspired violent protests online.

But isn’t that counteracted by what Biden said about White Supremacists being the real threat, and Antifa being just ‘an idea’?

Rush Limbaugh took that idea to the woodshed in short order:

RUSH: One of the most jarring moments of the first presidential debate between Trump and Plugs came during their exchange on the riots in blue cities across the country.

Now, Joe Biden declared that the violent, radical left-wing group Antifa is “an idea, not an organization.” He half-quoted testimony from FBI Director Christopher Wray, that Antifa was more of a movement or ideology than an organization.

Now, what he forgot to mention (Biden forgetting is common) is that the FBI Director also testified that Antifa is a “real thing” that is “coalescing regionally into small groups,” and is among the most “violent anarchist extremists” under FBI investigation.

Now for anyone who follows the news, there is no debate. Antifa cells have been perpetrating violence and vandalism for years. Self-identified Antifa members committed arson and destroyed property at the Trump inauguration.

Portland, Oregon, has been under siege by Antifa for months. Now, aside from the nightly riots and arson, they’ve even tried to set fire to police stations with cops and other people inside! For years, Antifa has been causing violent chaos in Portland and also in Seattle.

The main question isn’t whether Antifa is “an organization” or an “idea.” The only important question is why Democrat mayors and governors have put up with Antifa and haven’t called for the federal help they need to crush these violent, anti-American extremists!

And we know why. — RushLimbaugh

We’ve been warning about such things for a very long time.

For instance: Violence Seems To Be The Soup du Jour For The Radical Left

Here’s the guy they’ve turned into a ‘martyr’.
Antifa Anarchist Attempts To Firebomb ICE Detention Center — That Was A BAD Idea

Hey CNN: James Hodgkinson, The Bernie Bro Who Shot Scalise, Yelled Out “This is For…”

WATCH: Ted Cruz Lays Out What REALLY Happened On Jan 6… In His Own Words
January 26th, 2021 Clash Daily