President Trump held a rally in Circleville, Ohio on Saturday and, as usual, it was like a rock concert mixed with a 4th of July party. One thing, in particular, stood out, however, a trio of nuns proudly holding a large Bible and praying for the President stood right behind him throughout the entire rally.

President Trump’s campaign rally in Ohio on Saturday had his supporters in a frenzy, but it was three nuns wearing MAGA masks who stole the show.

Social media went wild on Saturday as images went viral of the ‘MAGA nuns’ holding up a Bible and praying while the president gave his speech in Circleville. 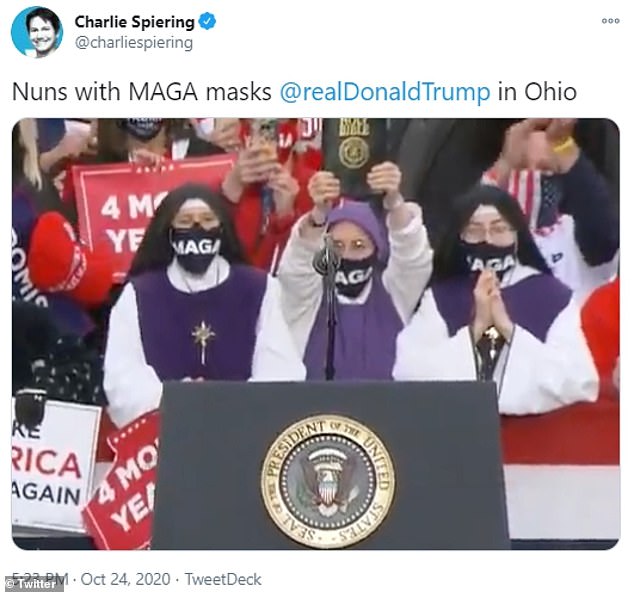 OMG there are nuns in the front row at the Trump rally right now!!! I LOVE IT!! #MAGA #Trump2020 #TrumpRally pic.twitter.com/eSpnsfAAW2

Gotta love the nuns with the MAGA masks behind Trump. pic.twitter.com/CnAhGqBiAY

Nuns for Trump… never seen this before. Getting interesting… ? pic.twitter.com/JF1rtt51Cl

People who know Trump is really the first president to 'hurt' Planned Parenthood are not in the least bit surprised to see nuns supporting him.

…others — not so much. Many thought that they weren’t real nuns at all.

this can’t be real pic.twitter.com/c4J27ItFjk

I auditioned for one of the fake nuns at trump rally today.
Never got a callback.

Then some asshat with a blue wave emoji in his Twitter handle decided to doxx them. He didn’t use their names, but did post the name of their order and drew a line between each nun’s face to one on another photo from the website. 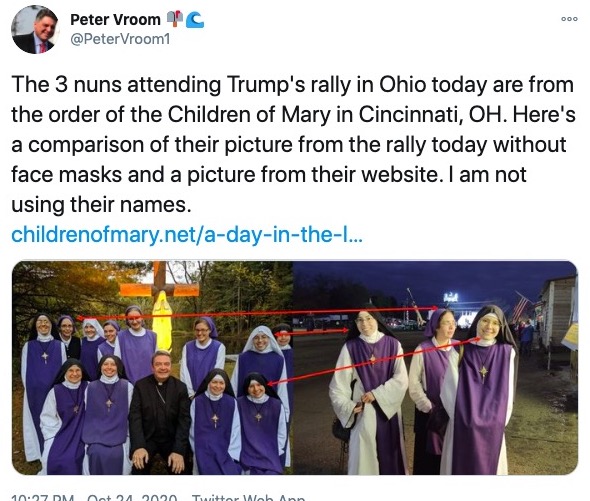 Being me, I emailed the Children of Mary nuns to ask if they attended the Trump rally in Circleville. They have just answered, "Yes."

She better use that rosary to pray for forgiveness. She'll need it.

These nuns belong to the Children of Mary. They normally focus on orphans. I wonder if anyone asked them about the 545 children Trump stole from their parents. A high percentage I'd assume were CATHOLIC. pic.twitter.com/Jqq8V4hcAC

Heaven forbid that a group of nuns supports the most pro-life President in American history, right?

President Trump has also recognized the Little Sisters of the Poor at the White House in 2017.

Trump recognizes The Little Sisters of the Poor at the White House https://t.co/3pmt1IhpQ2 pic.twitter.com/ikO5Vbl4i5

President Trump protected nuns from paying for abortion.
Joe Biden promised to make nuns pay for abortion.
After the Little Sisters of the Poor won in the Supreme Court, Joe Biden officially stated, “If I am elected I will restore the Obama-Biden policy that existed before…” pic.twitter.com/Y7BDFwGZqv

The anti-Catholicism on the left is rampant — just look at what Democrats had tried to do with Judge Amy Coney Barrett early on until there was massive backlash against it.

It’s no surprise that a group of nuns would express their political views — and that they’re supporting President Trump.

It’s only the left that’s surprised because they believe themselves to be morally superior to everyone else.