Senator Johnson says that Americans need to know whether the information on the alleged Hunter Biden laptop is Russian disinformation, if it’s fraudulent, or if it’s accurate.

The explosive New York Post story about the information from a laptop believed to have belonged to Hunter Biden contained incriminating photos, a sex tape, personal text messages with his family, and thousands of work-related emails.

It’s the classic “big if true” story, but it seems that the actions taken around the laptop are also becoming big stories themselves.

First, there is the censorship of Tech Giants who were running interference for Democrats — Facebook announced that it would “reduce the reach” for the article, while Twitter flat-out banned the sharing of it and has locked out a 200-year old newspaper from posting unless they delete the tweets linking to their own articles.

It has also been revealed that the FBI has known about the laptop since December of last year and, despite the incriminating emails that were on that hard drive — some of which have been confirmed by parties connected to Hunter Biden — there was no mention of that as Democrats were in the process of impeaching President Trump for alleged quid pro quo in a phone call with the newly-elected President of Ukraine.

That seems rather Deep State-ish.

Senator Ron Johnson (R-WI) has sent a letter to FBI Director Christopher Wray demanding answers. Senator Johnson is the head of the Senate Homeland Security Committee and said that the committee was contacted by a whistleblower in September 2019 and told of a laptop that had been left in a Delaware repair shop and it was believed to belong to Hunter Biden.

In the letter, Senator Johnson was pretty clear with his line of questioning — he wants to get to the bottom of why it’s taken so bloody long to hear anything about the laptop one way or the other.

It’s literally the question, “what did the FBI know and when did they know it?” 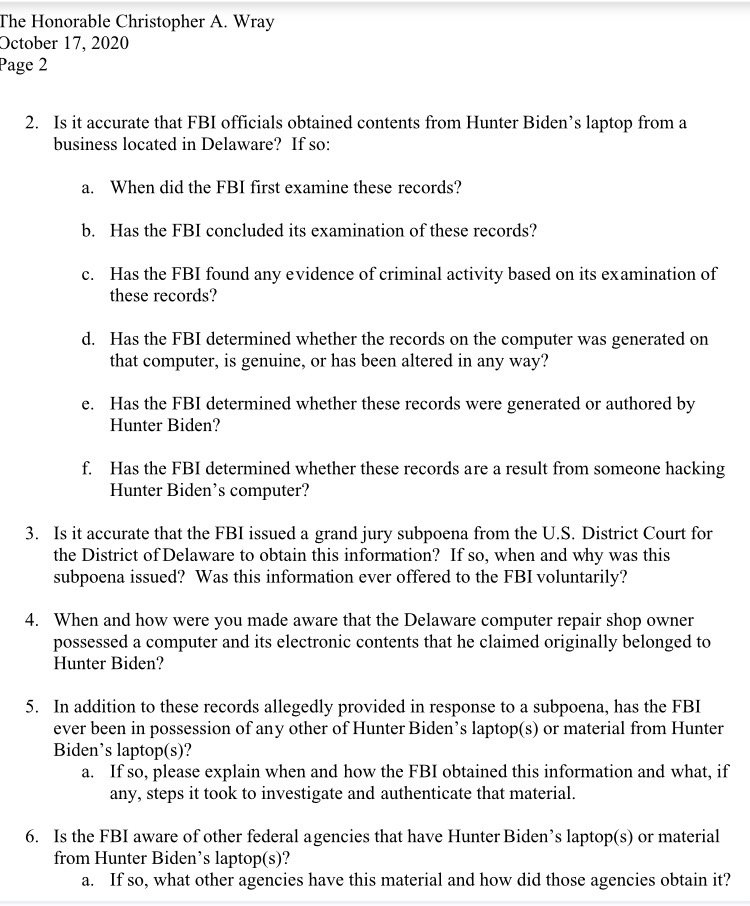 In the letter to Wray, Johnson details that a whistleblower contacted his committee on September 24 regarding Hunter Biden’s hard drive, which was left water damaged at a computer repair shop. The owner told the committee that he handed the MacBook laptop over to the FBI.

Johnson noted in his letter that his staff immediately asked the FBI to confirm or deny certain details to better validate the claim made by the whistleblower, but the bureau said they would not comment on any of the information.

‘[T]he committee must know whether the FBI has assessed the validity of materials the whistleblower has provided, and what, if any, actions the FBI has taken since obtaining this information,’ Johnson continued in his note to Wray.

The Wisconsin Republican senator said his questions about what the FBI knew about what was found on Hunter Biden’s hard drive and when they knew it speaks to a ‘larger issue.’

‘Why did they sit on it? Are they covering up just because Hunter Biden might be engaged in things that also maybe should have been investigated and possibly prosecuted? Do we have two systems of justice: one for Democrats and one for Republicans? One for the well-connected versus one for the rest of the Americans?’ he asked the Fox News host.

During the discussion on the show, some very interesting facts came out.

Senator Johnson said that there was a Grand Jury subpoena to take custody of the laptop in December 2019 — in the middle of the Trump impeachment investigation.

He also said that the Biden campaign’s response to the entire story seems “pretty odd” since they have only said that there was no “official” meeting with the Burisma executive.

What was also pretty odd is that the FBI agent who served the subpoena for the laptop has been investigating “child pornography issues” for the past five years.

Considering the recent Senate Report on Hunter Biden’s Ukraine corruption included possible ties to a suspected human trafficking ring, that seems like something that should be investigated further.

The laptop may very well be Hunter Biden’s laptop, but if it isn’t, that means that there is a whole host of other problems.

If the laptop is fraudulent but the result of hacking Hunter Biden’s iCloud account, then that means that there is a likelihood that foreign entities already have those damning and embarrassing texts, photos, and videos.

Senator Johnson and the Senate Homeland Security Committee are trying to get to the bottom of this with just two weeks until election day and the media and social media are running interference for the Biden campaign.

This kind of Deep State thing just shows how necessary Trump’s election in 2016 mattered and why it matters even more now.