While Tom Cotton is giving thanks for those whose work and legacy made possible the country we call home, others like Ilhan Omar were throwing shade. She can’t even dial back the contempt for Thanksgiving.

There are two fundamentally different understandings of America, past and present, and Tom Cotton’s celebration of this 400th anniversary couldn’t make that distinction any more clear.

Four hundred years ago this month, on November 11th, a document was signed whose importance has since echoed down through history.

Some forty or so men came together and struck an agreement from whose example the very concept of American self-government later sprang. But leftists, despising, denigrating, and trying to erase American history, have openly scoffed at the mere mention of any reference to the Pilgrims’ groundbreaking moment in history.

Here is Tom Cotton speaking up in recognition of the 400th anniversary of the signing of the Mayflower Compact.

Sen. Tom Cotton: "Just today for instance The New York Times called the [Pilgrims'] story a myth and a caricature. In the Food Section, no less. Maybe the politically correct editors of the debunked 1619 Project are now responsible for pumpkin pie recipes at the Times as well." pic.twitter.com/iO83s62UxH

Here he is again, discussing it on FoxAndFriends.

The faith, bravery, & wisdom of the Pilgrims places them in the American pantheon alongside the Patriots of 1776.

We ought to be celebrating their 400th anniversary tomorrow. pic.twitter.com/KQcv3BlguX

Meanwhile… Ilan Omar had ‘thoughts’ about the very people who pioneered the first steps of what eventually became the American concept of (irony noted) religious freedom. 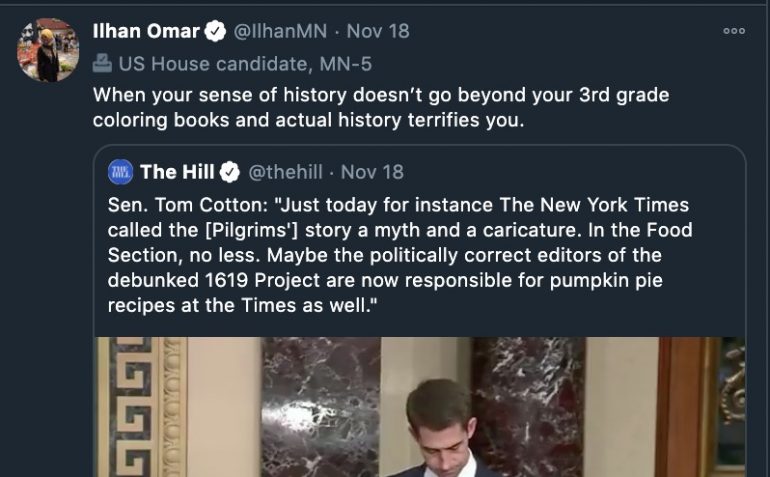 She hates everything America is and was. She wants to refashion it to fit her own Marxist ideals.