If only somebody could have warned them this might happen.

Now that Minneapolis has taken the hard left’s policies for a test drive, perhaps they’ll think long and hard about who they elect next time around.

A city that led the way in the push to Defund The Police is already feeling the real pain of the consequences of having done so. Remember when the left mocked our warnings that slashing the police would only hurt the communities they were trying to ‘help’? It turns out, we were right.

Crime has shot way up in the city, and now they’re scrambling to find a solution.

Here’s a FoxAndFriends infographic that tells the story at a glance: 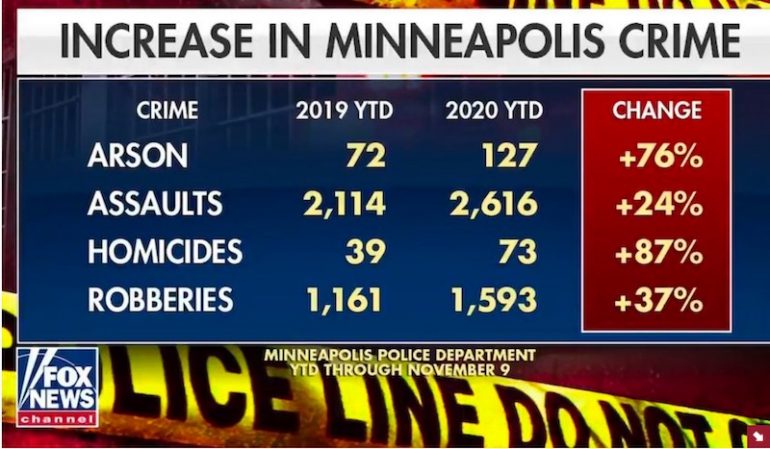 Crime is out of control. Why?

The answer is as simple as an old-school proverb. When the cat’s away, the mice will play.

If there is no enforcement of the laws, there is nothing compelling lawless people to obey the laws. Enforcement, as it happens, is done by actual people.

Without the people, there is no check on crime.

It’s an equation so simple it should have been obvious to everybody. But it wasn’t.

funding, which would allow Minneapolis cops to partner with the Hennepin County Sheriff’s Office and Metro Transit Police to close out the year.

“I have 74 people who are no longer alive in this city because they’ve been killed,” Police Chief Medaria Arradondo told officials. “I’ve got almost 500 people who’ve been shot and wounded in this city. We can talk about re-imagining policing. I’m talking about what is necessary today, in this city, and we need extra resources.”

…“If we just stayed status quo, right now, we will end this year with numbers that are absolutely unconscionable about what we should have in terms of community violence, and we don’t do a deep dive as a city as to what caused all of those,” the police chief warned in September as crime started to rise. –WashingtonTimes

As it turns out, he was right.

But what can be done about it after the fact?

Tensions between the Minneapolis City Council and Police Chief Medaria Arradondo spiked Tuesday as they debated whether to bring in outside law enforcement to help address a shortage of officers amid a wave of violent crime.

…With an unprecedented number of officers on leave, Arradondo pleaded for money to bring in help from nearby departments.

“Resources are hemorrhaging. Our city is bleeding at this moment. I’m trying to do all I can to stop that bleeding,” the chief said.

Many of the council members he was addressing pledged months ago to work toward “ending” the department following George Floyd’s death.–StarTribune

The chief faced open hostility from much of city council over his request for more funding, but he stood his ground.

He noted that about 90% of the department’s budget goes toward officers’ salaries and benefits.

The chief told Fletcher that, if he had a better idea, he should share it. “If you choose to say no to these victims of crime, then please stand by that,” Arradondo said.

Unlike the ‘defund the police’ city council, at least the police chief had both a grasp of the problem and a specific plan to address it.

Arradondo is asking for money to bring in 20 to 40 officers from the Hennepin County Sheriff’s Office and Metro Transit Police to form joint enforcement teams. The city would reimburse the agencies for their officers’ salaries and benefits.

While the details of the contracts are still being negotiated, Arradondo said he imagines the extra officers would be available to help answer 911 calls or work on special teams formed to help combat violence in hot spots. —StarTribune

At the beginning of the year, the department had 874 police officers, seven of whom were on some form of leave. As of Monday, it had 834 officers, 121 of whom were on leave, according to spokesman John Elder. Some of the officers on leave have filed PTSD claims stemming from their response to the unrest that followed Floyd’s death. —StarTribune

Gee, why do you suppose Trump spent so much time beating that drum about law and order?