For all the hullaballoo that was made over a handful of Russian Facebook ads in 2016, are three-quarters of a million fake followers liking and retweeting Biden and Harris an issue?

Many of the new Twitter followers have the last names “Kumar” and “Singh” and have their preferred language as Hindi. They also live in rural India.

It seems that Joe’s campaign wasn’t satisfied with his social media presence, especially on Twitter where his current standing at 11.8 million followers is still nowhere near President Trump’s 87.4 million followers. 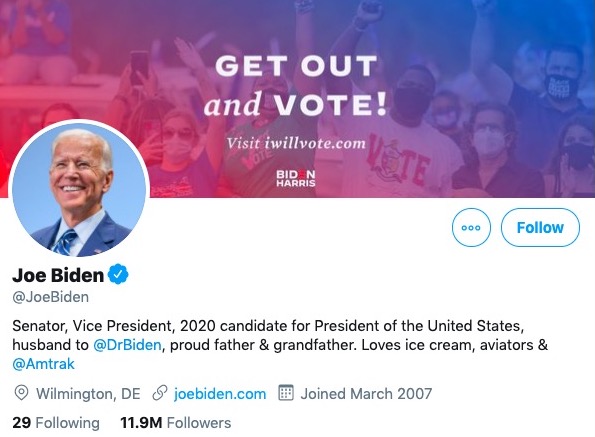 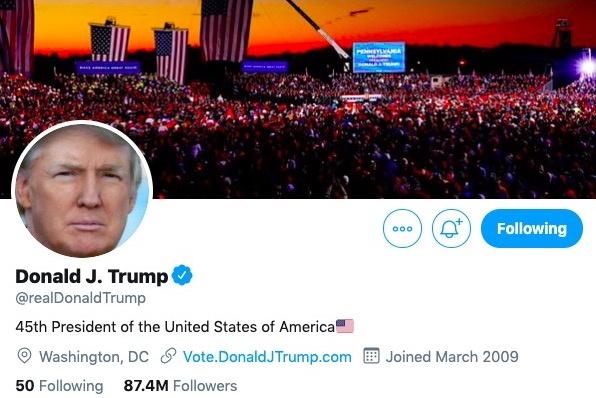 It seems that Joe’s campaign decided to shell out some cash for fake followers known as “sock puppet” accounts which seemed to be created “solely for the purpose of following Biden.”

Within two weeks of Biden selecting Kamala Harris as his running mate on August 12, his Twitter following jumped by 738,595 new followers—a 9.1 percent leap. The number hit 11 million by the third week of October.

A close examination has revealed unusual patterns. A large number of Twitter accounts that followed Biden’s appear to have been created exclusively for that purpose. And a large number of the users are located in small towns in rural India—in places where English-speakers are rare, and from handles run by people who don’t speak English as their first language, nor appear to be genuinely invested in American politics.

Newsweek reports that the troll farms have become a big money-making business in India which is one of the “most decentralized and robust in the world.”

Harshit Patel heads up a cybercafe that became a troll farm. Patel, a member of the youth wing of Prime Minister Narendra Modi’s Bharatiya Janata Party, began in 2014 to serve Modi’s campaign and it simply continued to turn a profit by providing nearly anything to paying customers. He said that he started out because of his ideology, “but then this became my profession. My wife got herself trained in Photoshop and now we offer not only these [trolling and propaganda] services, but also content creation” that also includes making memes. Patel said that he and his team will provide “fake news, Photoshopped images, support and ‘hate’ campaigns, and even incitements of mob violence.”

Four of his employees, young men who live in the neighborhood, take their stations at long desks that line two walls of the tiny shop, and open up task sheets assigned to them. A Google Doc tells each one of them who to follow, who to retweet, what to retweet and what comments to leave on specific posts.

Using aliases—each worker controls several hundred—they schedule tweets, check engagement stats and, at the close of their shifts, fill up a spreadsheet with their analytics from the previous day.

Yajpal Yadav also runs one of the troll farms. He’s a high school dropout, and in 2016 invested in 5 PCs and a broadband connection. He now employs 5 other people working social media accounts plus himself and his brother.

“Each one of us controls two to three hundred profiles across different platforms,” Yajpal said in Hindi, his only language. “We get daily targets from agencies in Delhi and Mumbai, and we simply engage with the target as we’re told.”

“Political parties are our main clients, but even brands and celebrities who need promotion come our way,” Yajpal said. “This is a business like any other.

“We don’t pick and choose. Joe Biden the person is irrelevant to us. We got a target in August to follow him and engage with his tweets, and we did. The agencies in Delhi who we work with don’t tell us any details, and we don’t ask,” he said.

Yajpal described a pyramid-shaped campaign structure akin to multi-level marketing, but without the mid-level payoffs. “There are so many levels [of subcontractors] in this, nobody can really trace anything back. We don’t even get paid through banks. We settle in cash once a month” via Hawala, a popular international money transfer system that uses bookkeepers outside official banking networks.

Yadav won’t give the financial details but did say, “I won’t tell you how much we make, but what I will tell you is this setup is feeding all our families. And I don’t have to ever worry about a roof on my head or about paying my children’s’ school fees.”

This is the kind of thing that Biden’s camp is willing to do to be taken seriously on social media. Just like everything else, he doesn’t put his faith in the American people, he sells out to foreigners.

As a wise man who loves America and is up for re-election says, “Sad!”