When we reported on the death of the guy at the head of Iran’s ‘Manhattan Project’, we had no idea just how epic the plan behind that death really was.

The target, after all, involves a guy who drives around in bullet-proof cars.

Why would their guy drive around in bullet-proof cars? As it happens, other nuclear scientists working for Iran have had an uncanny string of bad luck.

While Wiki is not a very reliable source for the details or (especially) spin, the events summarized here mirror what we have seen elsewhere.

Between 2010 and 2012, four Iranian nuclear scientists (Masoud Alimohammadi, Majid Shahriari, Darioush Rezaeinejad and Mostafa Ahmadi Roshan) were assassinated, while another (Fereydoon Abbasi) was wounded in an attempted murder. In November 2020 another scientist (Mohsen Fakhrizadeh) was assassinated.

Two of the killings were carried out with magnetic bombs attached to the targets’ cars; Darioush Rezaeinejad was shot dead, and Masoud Alimohammadi was killed in a motorcycle-bomb explosion. The Iranian government accused Israel of complicity in the killings. In 2011 and 2012, Iranian authorities arrested a number of Iranians alleged to have carried out the assassination campaign on behalf of Mossad (the Israeli intelligence service). Western intelligence services and U.S. officials reportedly confirmed the Israeli connection. In June 2012, the Iranian government was confident that it had arrested all the assassins. –Wiki

Here’s how the events reportedly played out:

(DailyMail made a helpful graphic to understand the timeline.) 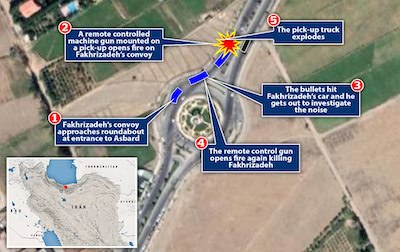 And a photo that’s just a little too grisly to put on above the fold. (You may want to scroll past it if you’re squeamish.) 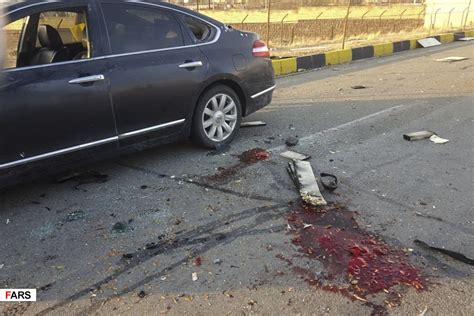 The description of the remote-control assassination contradict previous reports in the Iranian press that claimed the Nissan pickup exploded first, before a team of human assassins descended on the convoy, hauled Fakhrizadeh out of his car, and shot him in the street.

Revealing more about how Fakhrizadeh, sources told Fars that he had been travelling in a bulletproof car with his wife north of Tehran when something hit the car, causing the convoy it was travelling in to stop.

Fakhrizadeh then got out of the car to check what was happening before the remote-controlled gun opened fire, Fars said. The nuclear scientist was shot twice in the side and once in the spine, killing him.

A bodyguard who tried to shield Fakhrizadeh’s body was also shot and wounded before the parked car exploded.

‘In this operation, which lasted about three minutes, no human agents were present at the scene of the assassination, and the shootings were carried out only with automated weapons,’ a source was quoted as saying.

Investigators also claimed to have identified the owner of the Nissan, who they said left the country on Sunday, two days after the attack took place.

Ali Shamkhani, the secretary of the country’s Supreme National Security Council, repeated the line during Fakhrizadeh’s funeral, saying that ‘electronic devices’ were used in the attack.

Iran has been caught in a quandary over how to respond to the assassination, with some urging immediate action while others – including President Hassan Rouhnai – urged patience.

This puts Iran’s government in a tough spot.

They can do nothing and appear weak.

Or they can launch a retaliatory strike (they are currently blaming Israel’s Mossad). The main problem with that option is Biden would have a helluva time making the case for re-entering that treaty with Iran (if he becomes President) if they are taking shots at their Pro-American neighbors.