Biden thinks he’s won, does he? He might have seriously underestimated the resolve of his opponent to use EACH and EVERY available legal recourse available to him.

You didn’t REALLY think the guy who stood his ground through four years of illicit attacks against him was going to throw in the towel just like that, did you?

He’s not like so many gutless RINOs who’ve folded like a cheap tent before him. He’s well acquainted with having to stand his ground in court. There is no mystery to it, and he’s not afraid of what might be said about him.

This will put the fight in its proper context.

Someone pulled up a familiar movie clip and flipped into a meme appropriate for the occasion.

And for those of you who get offended by what’s in this clip, keep reading. You probably missed the point.

And now the disclaimer for perpetually-offended leftist readers with a room-temperature IQ. And censorious Tech Oligarchs. But I repeat myself. 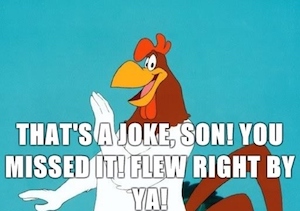 For the Left’s usual cadre of angry hall monitors looking for people to be outraged against, this was a JOKE. Trump will not make a ‘defiant last stand’ that will require a SWAT and the National guard to physically remove him from office.

And isn’t that what we’ve been saying about OrangeManBad for months now? Just look at Chris Wallace!

He will use courts, the Constitution and the rule of law. The very things an army of Democrat lawyers have been quietly undermining for the last six months and more, as reported in a Senate Judiciary document this September.

The joke is Trump’s Wolf-of-Wall-Street defiance, not the invocation of the National Guard.

And let’s add a special ‘thank you’ (or two other such words ending with ‘you’) to cancel culture for sucking the fun out of humor as well as everything else.