No wonder so many of our college kids come out so very off-center. As Rush calls them, ‘skulls full of mush’. It’s built right into their political monoculture.

Speak no ill of the Chosen One. Or else.

Paul Ewell, who was the head of Virginia Wesleyan University’s business school and dean of the university’s Global Campus, quit after his Facebook post went viral and sparked outrage.

Although Ewell’s post was originally posted just to his own page on November 6, the entire text was then screen-grabbed and spread around. –DailyMail

Here’s the post, which has since been taken down. 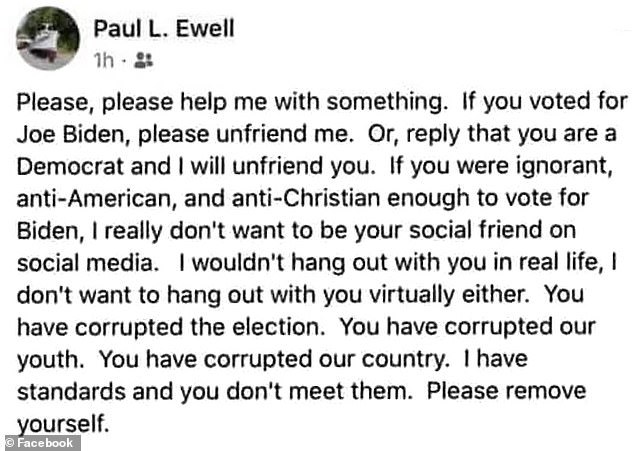 Strictly speaking, this isn’t just an example of him exercising his right to free speech, but also of his right to freedom of association. He doesn’t want to spend his time with people who are intentionally corrosive the principles upon which the country was founded.

You know, the sort of people who demand the firing of someone they disagree with, politically.

Word got out, and predictably, cancel culture came for his head on a plate.

The school tried to backpedal and distance themselves from the statement. That only encouraged the mob.

Once they sensed blood in the water, they went in for the kill, and the Dean lost his job.

Look at that letter again, and imagine a professor saying word-for-word the same message with Trump instead of Biden.

Nobody would bat an eye.

This tactic works again and again for exactly one reason. The staff and faculty are more afraid of the public pressure of these student ‘justice’ mobs than they are of any consequence associated with wrongful firing or trampling the free speech and association rights of their own staff.

Should someone in this situation sue for wrongful firing, and anything else that might apply? Yes. Each and every time.

But that won’t be enough.

Trump was talking about cutting federal funding for schools that don’t respect free speech. That’s closer to the mark.

If schools identified with an agenda and an enforced political monoculture suddenly became ineligible for federally-backed student loans for their cultish indoctrination programs, that might give them a meaningful wake-up call.