Whistleblowers are heroes. Untouchable. Should be defended with our lives. Just ask anyone who was reporting on last year’s Impeachment Sham. So what changed THIS year?

This year, we have a story of a brave public servant standing up to report the corrupt actions of government workers, showing integrity in the defense of both the law and the Constitutional institutions.

Wasn’t that exactly what we were told about he-who-could-not-be-named last year? That he needed to be carefully shielded from any negative repercussions of doing the right thing?

Last year, the celebrated ‘whistleblower’ turned out to be playing a role in an elaborate political setup scheme that had failed badly.

This year? This year we had an eyewitness claiming to have seen evidence of a conspiracy to commit fraud. Specifically, fraud that might directly impact the outcome of an election.

After 4 years of hearing what a horrible thing it was that elections had been mysteriously ‘tampered with’ by phantom Russians that put money into ads supporting both candidates, one might assume that Democrats would be happy to see election fraud exposed and properly dealt with.

You might also expect that a government agency entrusted with safeguarding the sanctity of the citizens right to vote might also be highly motivated to detect such cancers in their midst, and excise it quickly and cleanly.

But no. Instead, they turned their guns on the whistleblower himself. 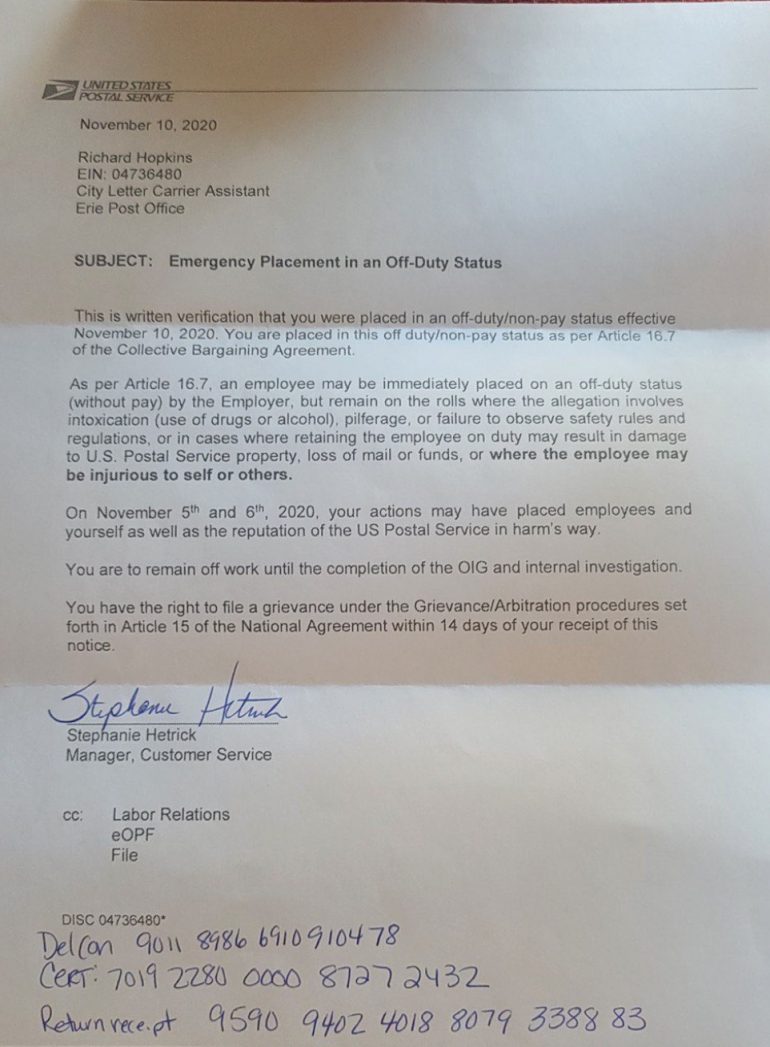 Richard Hopkins has been suspended without pay.

Key lines in the letter:

“On November 5th and 6th, 2020, your actions may have placed employees and yourself as well as the reputation of the US Postal Service in harm’s way.

You are to remain off work until the completion of the OIG and internal investigation.

A whistleblower calls attention to mail tampering by USPS employees, specifically relating to ballots, and HE is the one being investigated and suspended without pay for putting, and I quote, ‘the reputation of the USPS in harm’s way’.

The letter was signed on November 10th.

Richard Hopkins, a Combat Veteran and a marine with a daughter never asked to go public or for any of this. In the full interview released tomorrow, he said this harder than what he endured in Afghanistan.

The post office has placed him on non-pay status. pic.twitter.com/f054fa0D7I

And now WaPo is piling on… providing the darkness democracy needs to die … by printing a bogus story about Richard. (How quickly they forget lessons learned in the Sandmann affair.)

WaPo are falsely claiming that Richard has recanted his allegations. He stands by them.

He had his arm twisted by people WANTING him to recant, but that is hardly the same thing.

Is THIS guy their ‘source’? The guy who tried to intimidate the whistleblower into changing his testimony because he didn’t like the scrutiny his office was getting from the DOJ and the Senate?

Agent Strasser: “I am trying to twist you a little bit”

“I am scaring you here”…” we have Senators involved…DOJ involved…reason they called me is to try to harness.” pic.twitter.com/tK2JPu6Wqm

What happened to the royal treatment they gave to other public servants like Vindeman (don’t you dare call him ‘Mr.’), the Ukraine ambassador, or that bow-tie guy?

No, Richard here is a combat veteran with a daughter who risked it all to shine light on a real threat to voter integrity, and HE is the one getting rag-dolled.