Remember how Kamala giggled that obnoxious giggle and deflected when called out for being ranked as being even further left than Bernie Sanders? This is why.

It’s at the root of Marxism.

There’s a big difference between equality and equity. pic.twitter.com/n3XfQyjLNe

“Equitable treatment means we all end up at the same place” is literally communism.

Like most programs the left throw support behind, it seems like it *might* be a good idea, but fails miserably when put to the test in the real world.

Here are a few other criticisms of her video before we give it the ClashDaily treatment: 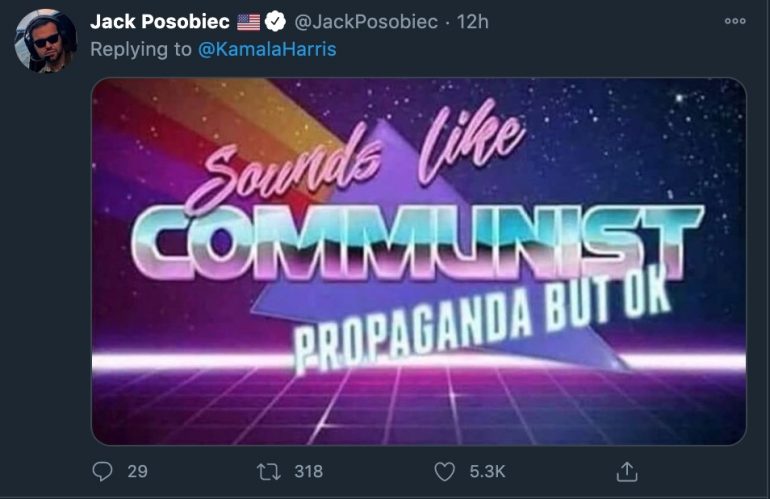 The false promise of the left, in 1 minute. Start out with a well-intentioned point on equality of opportunity, only to end it with the true Marxist intent: equity in outcomes.

They leave out the part where equity must be enforced with unequal -and tyrannical- treatment. https://t.co/Hflv16okCo

There is also a subtle but serious flaw in her worldview that comes right through in the way that video is presented.

The claim is that both people are given the same amount of STUFF. That’s not even what equality of opportunity means.

What it REALLY means is that we live according to the same RULES, the same laws, the same opportunity.

If she REALLY believed what she claims to believe, she would be insisting that more out-of-shape and ethnically diverse athletes get a chance to play in the NBA, for instance. Is it really fair that so many tall, athletic black men should have a shot at million-dollar incomes?

But none of us really thinks the NBA should change their entry requirements… do we? Of course not.

Should more people bad at math become engineers, or dopey people with shaky hands become surgeons? The list goes on and on.

Equality of opportunity is impossible to create.

We come from different parts of the country, with different access to resources — money, time, education, athletic opportunities, natural talent, neighborhood and so on.

If you want to see REAL inequality, you have to look at inequality of the law being applied to different people.

If the Biden Laptop, for example, had turned up evidence of one of Trump’s kids being on the take for millions from foreign leaders in exchange for political access to the President, the media and our legal system would already have purchased some pikes on which to affix their heads.

Meanwhile, we have complicit silence from the media together with slow-walking and excuses from the law enforcement entities who SHOULD be making sure that not even well-connected politicians and their kids get away with wrongdoing.

One of our opinion writers made a strong case for how justice hasn’t been applied equally here: Hunter Biden: White Crackhead Privilege

The complaint she makes about inequal opportunity (yes, we noticed the predictable racial component of that video by the way) cannot even begin to explain a very simple fact.

People stream into America from all over the world, arriving here with nothing.

After a decade or two of hard work, sacrifice and saving, it is not unusual to see these same immigrants leap up to the middle or even upper class.

It isn’t their ethnicity that accounts for this — these people come from all over, some of them arrive speaking little or no English at all — so much as their response to the opportunities that America has to offer.

If these immigrants can live the American dream, the problem is not to be found in inequalities of the system itself.

We need to find our answers elsewhere.