The anti-police sentiment in the United States has gone off the charts lately, and it’s very clear that New York is one of the places leading the charge in the anti-cop hatred.

Over the weekend in NYC, there were anti-cop protests in the streets.

Part of this vitriol against law enforcement stemmed from the police-involved shooting of knife-wielding Walter Wallace Jr. in Philadelphia on October 26.

In a series of protests over the last few days, Antifa and Black Lives Matter protesters are exposing exactly who they are — hate-filled anarchists who wish death on their enemies.

While the ACAB (All Cops Are Bastards) protesters decry the “violence” of law enforcement officers, they openly incite it against them by chanting that the “only good cop is a dead cop.”

Now, they’re calling for the death of anyone related to cops.

NYC: “An only good cop is a dead cop”

Antifa calling for the death of NYPD officers and their entire families pic.twitter.com/zpWZIXJ1Y0

Calling the NYPD Nazis was a thing.

Some were wearing pig masks and costumes taunting the police… who, unlike actual Nazis, didn’t react.

The chant “How do you spell Nazi? N-Y-P-D” rang through the streets as these “protesters” allegedly marched against racism and fascism.

NYC: Antifa chants: “how do you spell NAZI? NYPD!” while marching through Chelsea pic.twitter.com/0GHBqQxdEW

Then there was this chick who shows her moral superiority by wishing that all the children of law enforcement officers are “raped and killed.”

NYC: “I hope ALL of your children get raped and killed”

She seems lovely, doesn’t she?

She calls the police a “disgrace to society.”

Does she not realize that without law enforcement, there would be no “society” to speak of?

I’m beginning to think that the hair dye is affecting these leftists women and leeching into their brains making them the most awful people on the planet.

You can see the girl with the colorful headscarf next to the pink-haired shrieker realizes how bad that is and covers her mouth in shock.

But this pink-haired chick wasn’t the only one spewing awful things at police.

The Black Lives Matter protesters were degrading black female NYPD officers because racism and sexism aren’t bad when they do it, apparently.

And now, as election day draws nigh, we see that Democrat cities are preparing for the looting, rioting, and destruction that will spill out into the streets perpetrated by disgruntled Bernie Bros forced to vote for Joe Biden.

The MAGA crowd respects law and order, and aren’t exactly known for looting stores and burning down businesses because they’re having a collective tantrum.

The left, however, has been doing that for 4 years and in recent months it’s escalated.

NYC: Many mainstream retail outlets in Times Square are boarding up their windows preparing for the election aftermath

Trucks filled with wood are now pulling up in front of businesses to secure them pic.twitter.com/mY8XXaqO7e

WATCH: Businesses in Washington, DC are boarding up ahead of expected election protests. pic.twitter.com/0QMNURrqOK

Stores in Santa Monica are boarding up in anticipation of Election Day. Disturbing, to say the least. pic.twitter.com/mgSdstEjQ5

As the media continues to warn of the threat of “rightwing violence” remember, it isn’t the MAGA crowd that is smashing up things, burning police cars, and calling people Nazis for doing their job protecting the community.

These are the people claiming the moral high ground and want “systemic” change into our institutions… including law enforcement.

Why should we listen to racist, sexist thugs who wish death on their enemies and their families then riot when they don’t get their way?

But they’re propped up by their comrades in the Media (D) like Anne here of The Atlantic. 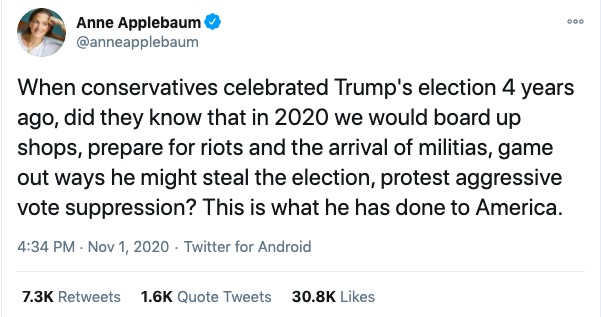 This isn’t Trump’s fault. It’s the fault of Trump-deranged leftists who couldn’t publish a positive word about his administration once in 4 years.

The Left did this, not the right.