Love him or loathe him, William Barr was nobody’s lapdog. He wasn’t bullied by the press, by the leftists, or even by the President who had appointed him.

Much like that scene from The Dark Knight, Bill Barr could say ‘You have nothing to threaten me with. Nothing to do with all your strength.’

He came when called upon to serve his country a second time. He stayed as long as he felt he could accomplish what he thought needed to be done, and left it to another when he had seen that to a conclusion.

Trump has clearly been at odds with Barr lately because of his frustration with a few things in particular. the delays of the Durham investigation resolving to any kind of a conclusion, the fact that the Hunter Biden criminal investigation was not public knowledge, and Barr’s public statements about election malfeasance.

Reports are that Durham may be wrapping up, and he has hired some prosecutors to join his team. We’ll have to wait and see how that plays out, and if there’s any ‘there’ there.

As for the voter fraud, we’re hoping that one of the things he is ‘clearing up’ is assigning someone to look into growing evidence of electoral wrongdoing… like that 68% error rate in the Michigan ballot machine audit.

We have seen a shift in how the media covered him depending on whether they saw Barr as an ally of Trump to be opposed and derided, or as an enemy of Trump they could use to taunt team MAGA.

All that really tells us is that he is a man that would sometimes agree with the President and sometimes disagree with him. One might argue that’s exactly what we want in a political appointment.

As for the point of conflict about the investigation into Hunter — Barr couldn’t make this case public. That would be a felony. We certainly had clues that the media could have picked up on if they wanted to– the FBI case number on the laptop receipt for instance specifically pointed to an open money laundering case.

For all the hyped-up sense of conflict we’ve been hearing about they are parting on amicable terms.

Trump is offering Barr a gracious exit and Barr has done Trump the favor of cataloging a Trumpian legacy the media has failed to report. 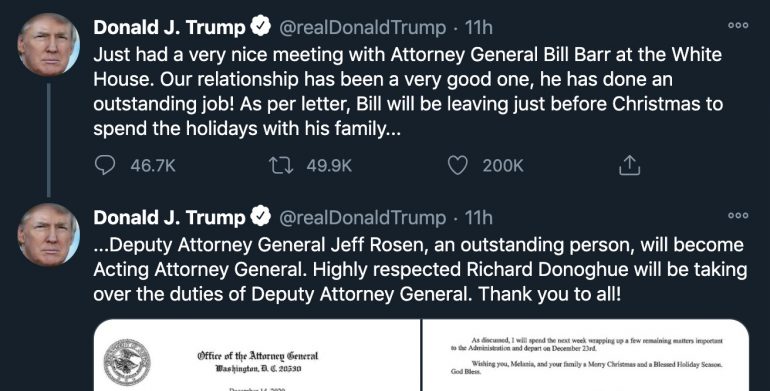 This is the letter Barr left with:

I appreciate the opportunity to update you this afternoon on the Department’s review of voter fraud allegations in the 2020 election and how these allegations will continue to be pursued. At a time when the country is so deeply divided, it is incumbent on all levels of government, and all agencies acting within their purview, to do all we can to assure the integrity of elections and promote public confidence in their outcome.

I am greatly honored that you called on me to serve your Administration and the American people once again as Attorney General. I am proud to have played a role in the many successes and unprecedented achievements you have delivered for the American people. Your record is all the more historic because you accomplished it in the face of relentless, implacable resistance. Your 2016 victory speech in which you reached out to your opponents and called for working together for the benefit of the American people was immediately met by a partisan onslaught against you in which no tactic, no matter how abusive and deceitful, was out of bounds. The nadir of this campaign was the effort to cripple, in not oust, your Administration with frenzied and baseless accusations of collusion with Russia.

Few could have weathered these attacks much less forge ahead with a positive program for the country. You built the strongest and most resilient economy in American history — one that has brought unprecedented progress to those previously left out. You have restored American military strength. By brokering historic peace deals in the Mideast you have achieved what most thought impossible. You have curbed illegal immigration and enhanced the security of our nation’s borders You have advanced the rule of law by appointing a record number of judges committed to constitutional principles. With Operation Warp Speed, you delivered a vaccine for coronavirus on a schedule no one thought conceivable — a feat that will undoubtedly save millions of lives.

During your Administration, the Department of Justice has worked tirelessly to protect the public from violent crime, worked closely with leaders in Mexico to fight the drug cartels, cracked down on China’s exploitation of our econoy and workers, defended competition in the marketplace, especially the technology sector and supported the men and women of law enforcement who selflessly — and too often thanklessly — risk their lives to keep our communities safe.

As discussed, I will spend the next week wrapping up a few remaining matters important to the Administration and depart on December 23rd.

Wishing you, Melania, and your family a Merry Christmas and a Blessed Holiday Season. God Bless

Nothing in that letter was specifically untrue, but that didn’t stop the partisan press from framing it with words like ‘bootlicking’.

Seeing how the press will be ordering new kneepads to resume their accustomed servile role with a Democrat President, they’ve long since forfeited any right to throw terms like ‘bootlicking’ around.

Had they bothered to report on Tara Reade, or Hunter’s laptop, or any of several scandals harmful to Joe (or success like the peace deals in the Middle East), polls tell us that enough Democrats would have flipped their vote or at least stayed home that all of the contested states would have gone the other direction.