Hey Austin — if you fail to protect the safety of your own citizens, you will be relieved of the authority to make those decisions.

‘Progressive’ priorities at any level of government habitually focus on their latest spending initiatives, and not so much on delivering core responsibilities. It’s a habit they just can’t shake.

Whether it’s ‘sequestration’ to bloat domestic spending and limit the needs for updating and maintaining the military, all the way down to decisions at the local school board, the pet projects tend to win out over the key deliverables.

At the city level, one of those key deliverables just happens to be the policing to protect the persons and property within their oversight.

The ‘defund the police’ movement has been just one part of the left’s overall campaign against the justice system in general. The more extreme versions want to abolish, not diminish the police force, the prison system, and any form of national border enforcement. Soros-backed AGs and Judges across the country haven’t been helping the situation any.

Austin’s city council voted unanimously to slash police funding, which has resulted in a predictable spike in crime. 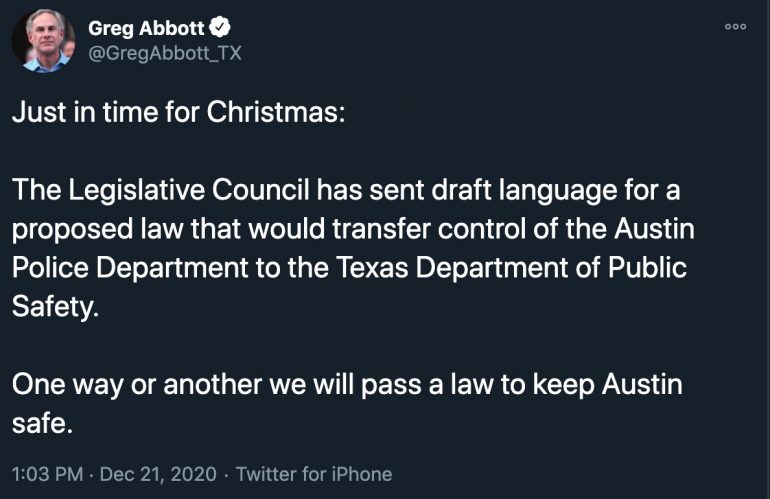 According to the draft obtained by KXAN-TV, the takeover would only apply to municipalities with populations of 950,000 or more and a ratio of fewer than two police officers per 1,000 residents, for which the governor needs to issue a written document declaring a public safety threat due to insufficient funding for police.

Under the bill, municipalities that are taken over to DPS would have to pay for the law enforcement services. They would also not be allowed to perform their own law enforcement after the takeover.

Earlier this month, Abott told his supporters during a tele-town hall that he was considering a state takeover of the policing responsibilities of a large portion of Austin that covers downtown, the state capitol, and the University of Texas at Austin. He said the city’s effort to defund its police force has led to a rise in violent crime. – EpochTimes

We’ve called Abbot out on a number of occasions, especially during the COVID shutdowns. But on this, he’s spot on.

If they are putting petty politics ahead of public safety, the Governor can and should reign in their stupidity.

You don’t have many services that are any more ‘core’ than police protection.