Have you seen what’s going on in Canada? A business owner defied lockdown orders and what’s happening up there is unbelievable.

Adam Skelly is the owner of Adamson Barbecue, a restaurant in Toronto. Faced with more lockdowns and the closing of indoor dining because of rising cases of COVID, Skelly pushed back and decided to open his BBQ joint anyway.

His video went viral on social media last week when he made the announcement that he was opening up for indoor dining.

Adamson might look like the typical Canadian with the hockey hair, flannel shirt, backward baseball cap, and beard, but he’s clearly got some fight in him.

He defied the orders and supporters started to gather there. The restaurant has become a gathering place for Canadians who are fed up with the lockdowns that have been on and off for more than 7 months.

It’s been called the “BBQ Rebellion” and it’s pretty amazing.

Skelly was ordered to close his restaurant, police warned patrons that they might be charged for violating public health ordinances, but — Skelly kept up the defiance.

Police barricaded the building, and on Day 2 of the BBQ rebellion, Toronto P.D. showed up with a locksmith early in the morning and changed the locks on the door to prevent indoor dining.

Toronto Police showed up in force on November 27.

TORONTO: 97 cops show up to make sure Adam Skelly can’t support his family by selling sandwiches

They had mounted police. Really?!

It’s good to know that there aren’t more severe problems in Toronto than a man trying to serve a smoked and slow-cooked brisket, eh?

Good to see that Toronto officials are focusing on what really matters.

Adam Skelly was arrested for trying to break into his own restaurant.

?WATCH: Video of the violence and chaos ensuing at #AdamsonBBQ — as the owner Adam Skelly is taken away in handcuffs. He had allegedly tried to break into his own restaurant after police changed the locks. (via @TinaYazdani) pic.twitter.com/wXJ7drvtoB

But the fight continued on…

On Thursday, police changed the locks on the restaurant, but allowed Skelly into a portion of the building they believed was not covered by the closure order from Toronto Public Health.

However according to police, his supporters smashed through drywall to access the restaurant area to try and reopen it.

Skelly was led away in handcuffs and now faces a number of charges, including attempting to obstruct police, mischief under, failing to comply with a continued order under the Reopening Ontario Act, and failing to leave when directed under the Trespass to Property Act.

Skelly was released on $50,000 bail, but here’s the creepy part — he was held for 30 hours because the prosecutor was being advised by provincial government officials what his bail conditions should be. Skelly is not allowed to post on social media, which is a blatant violation of his rights, nor can he go to his own businesses because one of them — Adamson Barbecue — has been seized by Toronto Public Health and has been boarded up.

Under the conditions of his bail, Skelly must stay 200 metres away from Adamson Barbecue, as well as his two other businesses; He is not to operate a business except in accordance with the Reopening Ontario Act; He must obey the Health Protection Act, as well as all lawful orders by Ontario’s Chief Public Health Officer and the Regional Public Health Officer. As well, he must not communicate on social media.

So Adam Skelly is banned from social media. That’s obviously unconstitutional. This stopped being about the virus a long time ago. It’s about control and power and censorship and obedience. So of course the Media Party is on the side of the censors. pic.twitter.com/tsq86y6Vfp

See, it isn’t just in America that the COVIDictators are deeming which businesses are and are not “essential.”

Oh, and by the way, the population of Toronto is about 2.7 million and, according to the province of Ontario’s database, the number of COVID deaths as of the writing of this article is just under 1,600.

Here’s a screenshot of the total number of COVID infections since March within the city of Toronto. 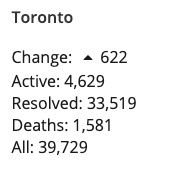 While every death is tragic, the vast majority of deaths in Canada — like in most places — are happening in nursing homes and other “long-term care facilities.”

Meanwhile, schools are not fully open, restaurants are closed, but the big box stores are still open, and so are casinos — which just so happen run by the provincial government.

Some of the biggest losers in these lockdowns are small businesses. Big businesses are thriving.

It’s time to take a good, hard look at lockdowns and stop penalizing and vilifying people who want to keep their businesses open.

So, who is it that’s politicizing a pandemic?