It’s an absolutely vile tweet from anyone, but coming from Debra Messing, it’s even worse. Here’s why…

It’s weird that Messing, a proud LGBTQ+ activist, would tweet something that has some pretty serious homophobic undertones, but it’s also strange that she “hopes” President Trump is repeatedly raped, considering she is one of the founding members of the #TimesUp movement.

Messing was one of more than 300 prominent women in Hollywood who teamed up earlier this month to launch the Time’s Up initiative to combat sexual harassment and gender inequity on the job, including a legal defense fund aimed to help less privileged women — such as those in non-entertainment fields. The aim is to help protect them from sexual misconduct and the potential fallout from reporting it.
Source: The Wrap

Messing tweeted, “AMERICA. THIS is a LEADER. @realDonaldTrump you are a weak, scared, stupid, inept, negligent, vindictive, narcissistic, criminal. I hope you live a long life in prison where you become the most popular boyfriend to the all [sic] inmates.”

The tweet, which is shared below as a screenshot, is the product of a mind that has been corrupted by Trump Derangement Syndrome™ for the past four years. 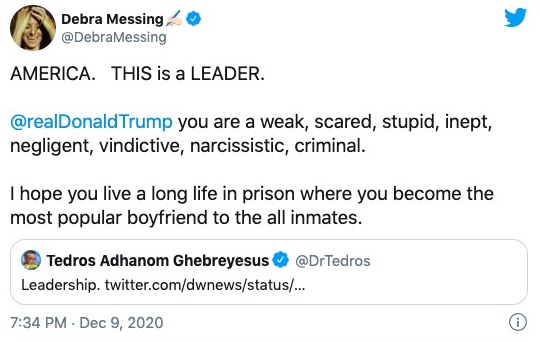 Remember, she was one of the celebrities calling for a month of #Resistance in January 2017.

CELEBRITIES Join Group Calling For A ‘Month Of RESISTANCE’ Against Trump — Do You Care?

It’s quite interesting to see one of the founding members of #TimesUp advocate prison rape. @TwitterSafety allows this. https://t.co/UBtF1WgSNl pic.twitter.com/9hLmb0lDPZ

Back in September 2019, Messing was very upset that President Trump had a fundraiser in Hollywood. She and her Will & Grace co-star, Eric McCormack, called for a Hollywood Blacklist targeting Trump supporters.

HER WILL, ZERO GRACE: Debra Messing Is Calling For The Doxxing Of Trump Supporters

They were shamed into walking that back.

This isn’t the first time that Messing has tweeted something that was deeply offensive. Back in July, she said that Kanye West was “disgusting” for deciding to run for President because it would “take” “black votes” away from Joe Biden.

She was called out by the Co-Chair of Bernie Sanders’s campaign for insinuating that the Democrat party “owned” black votes.

You just can’t stop dipping can you @DebraMessing? Your connotation is racist?.
1. Black voters are not owned by anyone. Our vote should be earned every election cycle. 2. We can think for ourselves & don’t need your help. 3. Sometimes it’s best to stay out of family business. https://t.co/RVsqJFDbS4

Later, she doubled-down tweeting, “Let me be clear: I said nothing about LGBTQI/queer LOVE. Rape is an act of violence. Trump has perpetrated violence on hundreds of millions of people. My hope is (and this is the first time in my life) that the tables are turned and he is the victim of perpetrators.”

She promptly deleted the tweet when people asked if she was saying that she thought prison rape was a reasonable form of retribution for a politician she didn’t like. She realized how that looked and then she issued an apology because she didn’t want to offend the LGBTQI/queer community.

I’d like to say I have been an LGBTQIA ally for decades, and I was in no way referencing LGBTQI/queer love/sexuality. It is not my proudest moment, but 45 has victimized 100s of millions of ppl; I had wished the tables turned on him. I apologize for the offensive way I did it. https://t.co/Q6SLIo9DWc

Weird. She didn’t seem so concerned about being offensive back in June when she posted this little doozy. 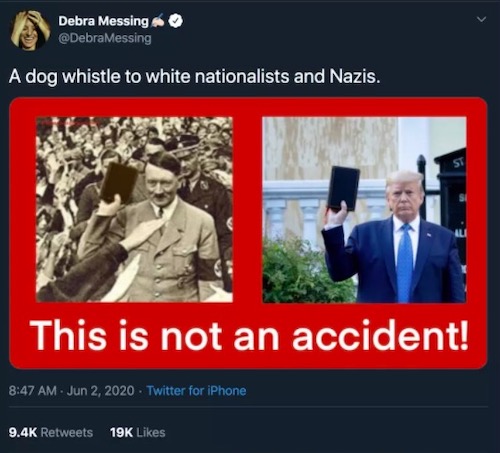 Who is a great big, stupid, hypocrite?

Just like the vast majority of her Hollywood peers.

Deranged leftists are just so very “tolerant,” aren’t they?

And they’ve got their comrades, the Big Tech Tyrants and the Media (D), turning a blind eye to their antics.