Forget the fact that courts are an entirely Constitutional tool for addressing legal differences — or that an Iowa Democrat is trying to get the certified results overturned by the house — Democrats want to punish Republicans for using the exact same process to advance their OWN politcal case.

Just like we’ve seen so many other times — Democrats are busy doing the very thing they have been accusing others of doing. This time, it’s ‘voter suppression’ — on an enormous scale.

Without Hypocrisy, would Democrats have any defining characteristics?

Looks like Democrats been taking their crazy pills again.

Invoking the 14th Amendment regarding the disqualification from public office of anyone “engaged in insurrection or rebellion,” Pascrell asserts that these Republicans committed “unbecoming acts that reflect poorly on our chamber” and as such should not be seated. — LegalInsurrection

Ilhan Omar — power-mad and corrupt as we all believe her to be — surprised none of us with her reaction, retweeting Pascrell with a simple ‘100%’ emoji and an arrow bringing attention to the original statement.

Power-by-any-means necessary seems about right for a woman whose team has faced accusations of illegally buying votes.

Hunter Biden is now at the center of a criminal investigation, one specifically related to his time working for Burisma… including hundreds of thousands of dollars of undeclared income –which was exactly the sort of thing Trump was asking his counterpart to look into during that phone call they tried to impeach Trump over.

If anyone has been plotting a coup, it’s the party that wrongly spied on the Trump campaign and General Flynn (to which Joe Biden himself was an enthusiastic accomplice), weaponized the DOJ and CIA against a political party, set up the bogus predicate for the Mueller investigation that came up empty and conveniently turned a blind eye to any corrupt Democrats like, say, Tony Podesta, brother to Hillary’s campaign manager and Manafort’s business partner who was conveniently offered immunity.

That party was planning to impeach Trump even before he took office, and the alleged whistleblower was openly talking about his role in the resistance since 2017. 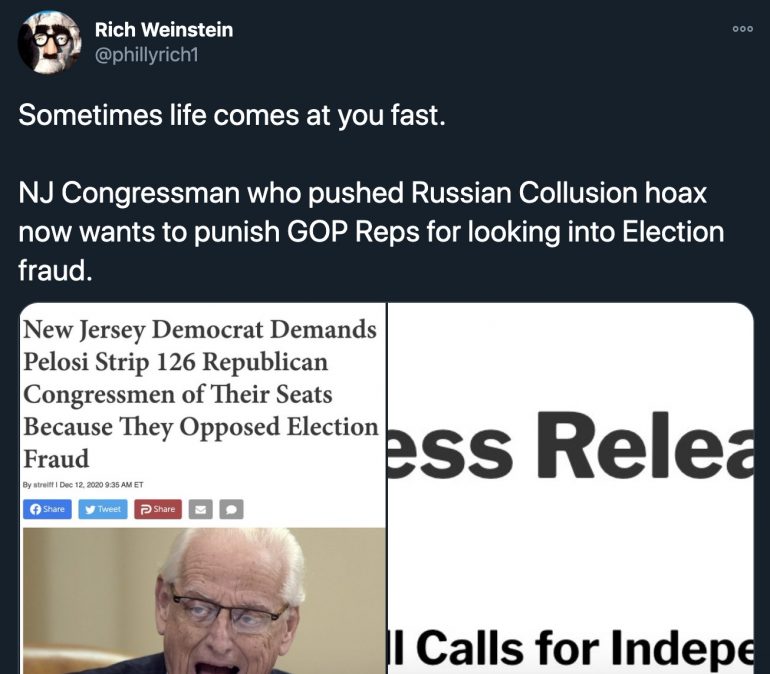 Today I’m calling on House leaders to refuse to seat any Members trying to overturn the election and make donald trump an unelected dictator. pic.twitter.com/icTmGKCpuR

By that same ‘unelected dictator’ rationale, Al Gore should be tried for treason, and Iowa Democrat Rita Hart should be officially denounced by her party for trying to get her party to override the certified Republican win.

See how selective their pious outrage is?

It’s because it’s entirely fake. It’s a means to an end, and the end is — as it always is — their own grasping for ever-increasing political power.