Team Zuckerberg is really on a roll, first they’re busy tilting elections, whether citizens agree with them or not — now they’re making room for open bigotry on their site.

Well, they’re making room for SOME open bigotry, so long as it’s being expressed AGAINST white American males and not BY Them, it’s A-OK.

Facebook has de-prioritized removing hateful slurs against white people, men and Americans, instead focusing on blocking slurs against black people, gays, Jews and other groups.

The change on Thursday in Facebook’s algorithm is a shift from the social network’s ‘race-blind’ system that previously removed anti-white insults as well posts such as ‘men are dumb’ or ‘Americans are stupid.’

The changes are to the social network’s automated systems, meaning hateful posts about whites, men or Americans that are reported by users can still be deleted if they violate Facebook policies.

‘We know that hate speech targeted towards under-represented groups can be the most harmful, which is why we have focused our technology on finding the hate speech that users and experts tell us is the most serious,’ said Facebook spokeswoman Sally Aldous.

Roughly 10,000 fewer posts are now being deleted each day after the change in policy, according to documents reported by the Washington Post.

Over the past year, Facebook has also updated its policies to catch more implicit hate speech, such as depictions of blackface and stereotypes about Jewish people, Aldous noted.

‘Thanks to significant investments in our technology we proactively detect 95 percent of the content we remove and we continue to improve how we enforce our rules as hate speech evolves over time,’ Aldous said. –DailyMail

From whom? From advertisers.

And where are the advertisers getting pressure from? From cancel culture.

So caving into the pressure only makes this feedback look start spinning even stronger.

They are literally making the calibrations they already had in place to screen out anti-male, anti-white and anti-American speech more lax in an effort to make for less hate speech.

And what about the folks who have decided that Jewish folks are (so far as the intersectional totem pole counts, anyway) just another subset of white folks and deserve no protections.

What then, Zuck? You gonna push back, or roll over and take what they’re pushing?

All those billions and you still don’t have a functioning pair.

Doug Giles, best-selling author of Raising Righteous And Rowdy Girls and Editor-In-Chief of the mega-blog, ClashDaily.com, has just penned a book he guarantees will kick hipster males into the rarefied air of masculinity. That is, if the man-child will put down his frappuccino; shut the hell up and listen and obey everything he instructs them to do in his timely and tornadic tome. Buy Now: The Effeminization Of The American Male

Check out this epic new mug… Who Would Jesus Whip? 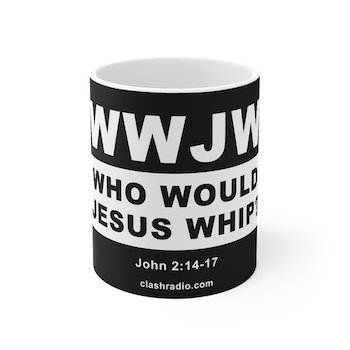 This mug is perfect for coffee, tea, hot chocolate, and triggering squishy Christians who think that Jesus was a hippie in a peignoir bringing a message of peace and love … but skip over the part where he braided a whip and cleansed the Temple.

Get yours at the ClashRadio.com store today!