In case there is anyone out there still wondering, it’s becoming clear that the decision for Silicon Valley to dogpile and ‘cancel’ a sitting president was a political one, not a business one.

They are perfectly willing to play chicken with trillion-dollar companies (and their shareholder’s investments) so long as they can drop a hammer on Donald Trump and (more importantly) the movement he has started.

The official excuse they are giving is that they want to avoid political violence.

But Jack Dorsey, in his own words, has stated otherwise.

He has no intention of letting up the tech censorship of the political right.

You’ll notice that not only have big tech overlords excused doxxing and explicit violence by various groups on the political left — including those who have caused literally BILLIONS of dollars in property damage — they have gone so far as to a point of aligning themselves with some of them… DESPITE their explicit endorsement of violence. 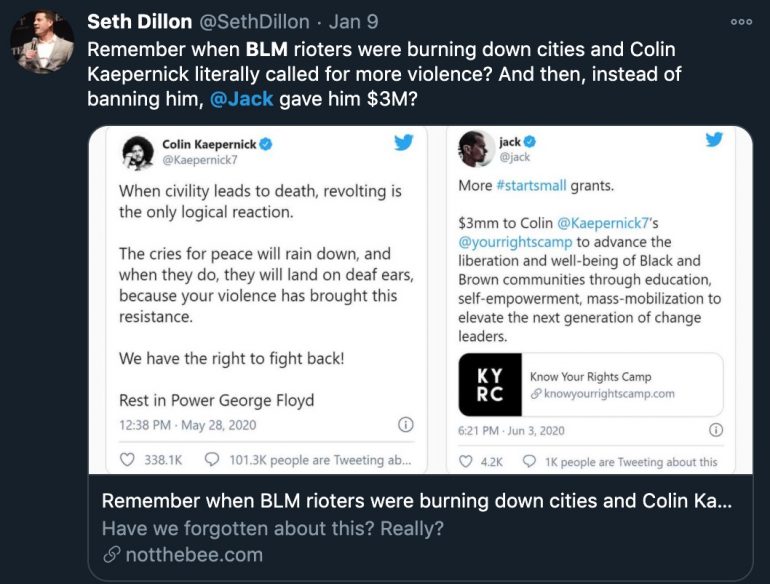 Here’s a longer clip of the video Tucker took that from.

They haven’t figured out yet that individual states — including Red States — can write laws explicitly protecting political expression from being singled out for commercial suppression. Laws that will expose precisely this behavior to the same kind of legal action and financial risk that their apparent anti-competitive practices could also expose them — and their investors — to.

Silicon Valley has already paying the piper for this in the markets, what remains to be seen is whether this is just a blip or a sign of things to come.

…Facebook and Twitter possibly took the biggest retaliatory steps when they indefinitely banned Trump from their platforms on Thursday and Friday, respectively.

Both companies cited the risk of additional violence for their bans, but investors largely balked at the action. Facebook tumbled 4% on Monday and another 2.2% on Tuesday as shareholders dumped the stock, likely fearing the ban could drive users off the platform. By the time markets closed on Tuesday, Facebook’s market cap sat $47.6 billion below its Friday level.

There has been bounce-back since.

But between the loss of customer confidence in these companies, the likelihood that they will face an onslaught of lawsuits – even challenging the relevance of section 230 protection for the behavior they have been engaged in – why are they playing chicken with their investor’s money?

Are they expecting the dozen or more advisors big tech has inserted among Joe Biden’s advisors to shield them from the consequences of picking off Joe’s political enemies?

And if so… doesn’t that just expose this as part of an even bigger problem than the one they’re being criticized for now?

Quid Pro Joe might just take on a significance that would have made Joe Stalin blush with envy.