Hey Cold-War kids — if someone told you that POLAND would have freer speech than America would you have believed it?

That’s right, a Warsaw-pact nation is (in at least one sense) freer than the land of the free and the home of the brave.

It’s crazy, but here we are.

While American citizens are cheering the digital book-burnings, Poland is pumping the brakes.

Polish government officials have denounced the deactivation of Donald Trump’s social media accounts, and said a draft law being readied in Poland will make it illegal for tech companies to take similar actions there.

“Algorithms or the owners of corporate giants should not decide which views are right and which are not,” wrote the prime minister, Mateusz Morawiecki, on Facebook earlier this week, without directly mentioning Trump. “There can be no consent to censorship.”

“Censorship of free speech, which is the domain of totalitarian and authoritarian regimes, is now returning in the form of a new, commercial mechanism to combat those who think differently,” he wrote.

…He said the draft law prepared by the justice ministry would make it illegal for social media companies to remove posts that did not break Polish law.

“Removing lawful content would directly violate the law, and this will have to be respected by the platforms that operate in Poland,” Kaleta told Rzeczpospolita newspaper. –Guardian 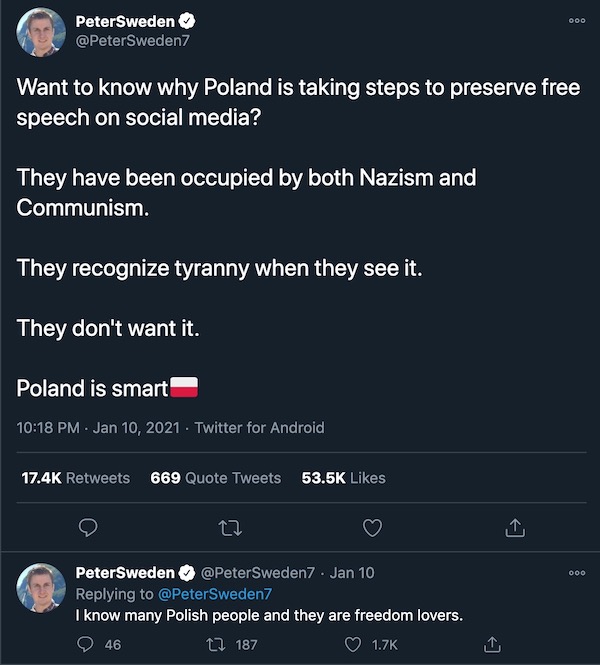 Reactions like this might have something to do with the backpedaling we have seen from Twitter’s Jack ‘Hipster Rasputin’ Dorsey.