Science can be politicized, or it can be trusted as reliable, impartial, and true. You can’t have it both ways.

After months of censoring and defaming anyone even slightly critical of the CCP virus data numbers, or asking uncomfortable probing questions about how we arrive at the numbers of COVID cases, we’re seeing a miraculous change.

It’s almost exactly the outcome President Trump had predicted, but they waited until January, rather than November. The COVId crisis is over. Or at least, it will be greatly diminished.

Praise Be to the Oz The Great And Powerful on the magical day he took office.

The ‘magic’ that will change how we see the pandemic wasn’t any of the obvious things.

It wasn’t the outgoing administration’s ability to marshall cooperation between the private and public sectors to fill in gaps in the PPE and other aspects of the medical supply chain. It wasn’t the provision of overflow hospital space in critically-affected cities; it wasn’t the slashing of red tape that allowed MULTIPLE versions of the vaccine to be manufactured and distributed in months rather than years.

It wasn’t the guidance provided that allows places like Atilis Gym to have gone months without a single reported case of Coronavirus transmission on-site.

It was the proposed change to the specific testing methodology that scientists have been raising concerns about since when — May, was it? 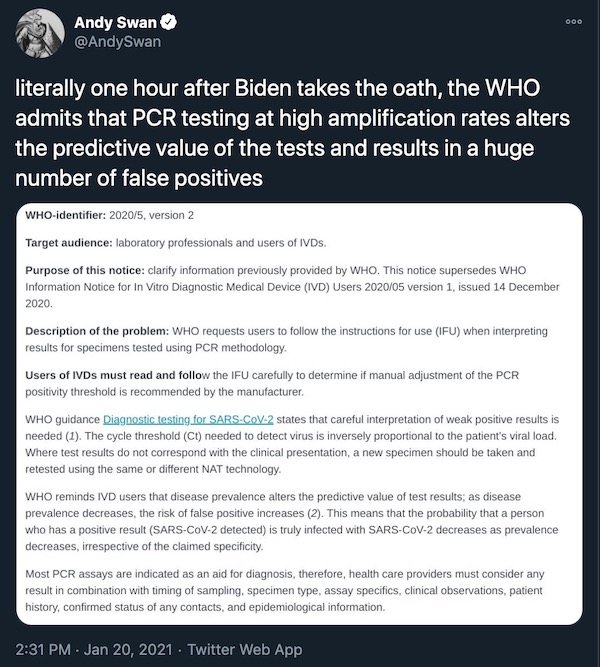 Here’s the portion of that tweet that is of particular interest to us, with a few highlights added:

In broad terms, this guidance is telling us that (moving forward) we will see a change in how the PCR test is used to ascertain whether someone has the virus or not.

Instead of calling every positive result a positive case, doctors are being advised to compare that result to other clinical information we have on hand, (say, symptoms) recognizing that this particular test is calibrated to be very sensitive and can quite likely produce a false positive result.

If a questionable positive result is ascertained, it is NOW recommended that another test (including a test using a different means) be applied.

‘Believe the science’ was quoted like a mantra for the past 9 months. ‘Science-deniers’ was one of their most popular epithets. Big Tech silenced dissenting voices for who knows HOW many months, including those who inquired about seemingly-promising treatments that might increase survivability. Questions about specific treatments that were inexpensive and widely available were verboten, until the AMA quietly reversed its guidance just in time for the election.

This doesn’t even address the fact that vaccine announcements were held up until just DAYS AFTER the election, with obvious partisan support for the challenger within big pharma.

Why the politicization of science matters

Increasingly, the once-bright lines between politics and science are being blurred.

While this shouldn’t really surprise anyone paying attention to the hyper-partisan nature of our culture, it is a worrying trend.

The reason science and innovation flourished in our part of the world to a degree not seen elsewhere was explicitly due to the capacity for independent thinking, and challenging conventional wisdom.

A political monoculture does not allow the latitude to challenge conventional wisdom. And the inherent dangers of that are easily seen.

Look no further than the hysteria surrounding when our then-sitting President cited a respected medical journal’s published article about the potential benefit of HCQ. The public, the media, democrats, and big tech all began recklessly discrediting and shaming of doctors who had used it to save the lives of their patients to see how that can end badly.

Government and corporate funding are one part of the problem here. There are financial incentives attached to the conformity of thought. Even the new style of vaccine produced by Project Warp Speed exposed the fact that the conventional wisdom of scientists had long since scoffed at the new vaccine technique and technology that led to the vaccines now available to the public.

We’re going to need a different kind of toughness than the one Joe pretends to have.

We need the kind of toughness that can stand his ground and say ‘no’ to powerful interests — even when those interests are hellbent on his destruction.

You may think we mean Trump. He’s a pretty good example of that kind of stand-along-against-the-world tenacity. But we have a much better example in mind.