It sure would be embarrassing for someone who wrote a book about his own amazing Gubernatorial leadership during a pandemic if it turned out that he was keeping us all in the dark about how bad it REALLY was.

Especially if his state had the second-highest per-capita death toll in the country and a COVID deaths-per-100k rating that far exceeded those of EVERY SINGLE national average in the WORLD?

Because that might make it look like all the trouble Andrew Cuomo took to scapegoat ‘Orange Man Bad’ was nothing more than one giant New-York-sized CYA move from the very beginning. And a cynical attempt to run a hated Republican out of office.

Be an awful shame if a scandal like that were to come back and bite someone in the ass, afterword, wouldn’t it?

New York State undercounted COVID-19 deaths in nursing homes by as much as 50%, according to a scathing report from the state attorney general that adds to long-running complaints about how Democratic Gov. Andrew Cuomo handled the long-term care population.

Attorney General Letitia James said investigators found data that suggest many nursing home residents died after being transferred to the hospital. But that wasn’t reflected in the Cuomo administration’s tally of 8,500 deaths, she said.

Some nursing homes appeared to underreport their deaths to state authorities, and Ms. James found that lackluster compliance with infection-control protocols, putting residents at risk. -WashingtonTimes

And whose signature, personally, was on that infamous order in March compelling nursing homes to accept COVID positive patients into the midst of the very people whose lives were already known to be most imperiled if they became infected?

Were there any chapters about THIS in that book of self-praise detailing what a champion leader you were during the pandemic? Did any of this get a mention when you stepped up to accept that Emmy? 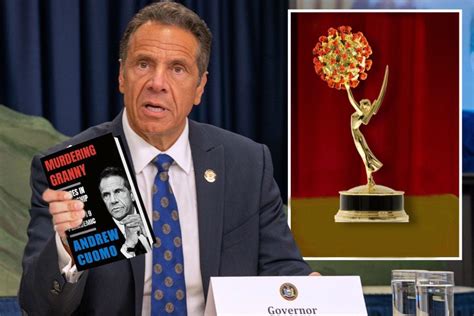 How many times did you lecture us about the danger WE would pose to the elderly, when it was your own administrative failures driving such a big part of the death rate from the beginning?

If Cuomo had any sense of honor or same, he would apologize to New Yorkers, Americans, and even to Donald Trump for all that shameless spin-doctoring, trying to set up anyone, anyone at all, as his fall guy, just so it wouldn’t become the virus that killed Cuomo’s own high-minded political ambitions.

Maybe if his brother’s network weren’t so full of incestuous nepotism, they would have had the political independence to ask the hard questions about why some Blue States were so badly underperforming their Red State counterparts.

Maybe the difference in how De Santis protected his state’s retirees while New York threw them to the wolves played some part in how different the body count looks in Florida with MORE retirees and a greater population than the Empire State.

Andrew can sweep it under the rug all he wants. But we have the receipts. Get ready, there are a LOT of them! For a story like this one, it’s time we remind him who he REALLY is as we take a walk down memory lane.

The ‘trusted’ media would never do this, so we will do their jobs for them.

He hasn’t let up. Just yesterday we ran this story where he was STILL trying to gaslight us all into believing he was the hero and that Trump was personally responsible for the sorry state of his state.

Was the problem at the Federal level?