It’s been the one burning idea on their mind at least since 19 minutes after he was inaugurated. Now they’ve impeached him a second time.

For whatever the hell good it will do them.

Sure, maybe it gives them a snappy trivia answer — who was the first President to be impeached twice — but other than that, what did they accomplish?

For one thing, we need to remember which corners this ‘great defender of the Constitution’ had to cut to make this happen.

It was bad enough that evidence used against him in his first Impeachment included people whose sworn testimony was later proven to be in direct conflict with known facts (regular people have a fancy name for that sort of thing), the refusal to call witnesses NOT approved by the kangaroo court prosecution, and using the Intelligence committee to run it rather than the Judicial Committee.

There was no opportunity to confront (or contest) his accuser. Details about his accuser’s relationship to those who were accusing him were concealed, and the result was known before the first evidence was presented.

And yet, the second time around made the first one look positively ‘by the book’.

The second time around had no time in committee. There was no fact-finding. There were zero attempts to allow the accused to rebut the accusations. Before impeachment had begun, Democrats announced they had enough votes to impeach, so it was a ‘fait accomplit‘, meaning the entire thing was, without exaggeration, Pelosi’s approximation of a Soviet Show Trial.

That didn’t stop 10 Republicans from joining in with their own support for impeachment.

THIS is just plain creepy: 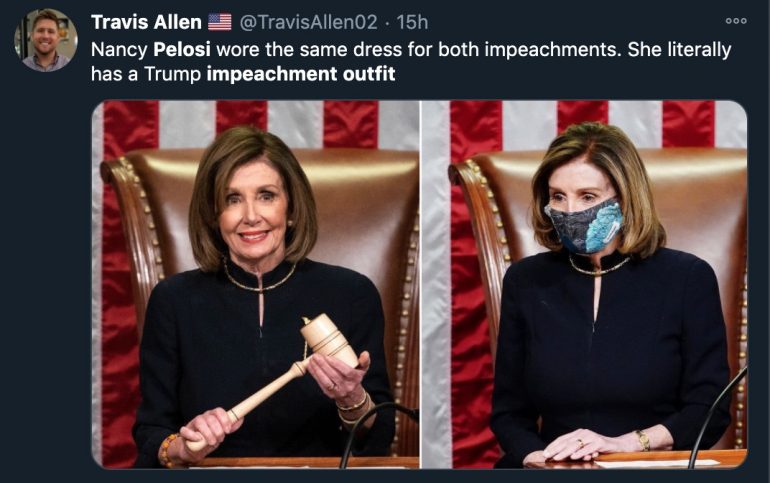 The manner in which the process was conducted was sketchy. The obvious motivations were sketchy.

Even if it does somehow go to trial, they will come off looking like tinpot tyrants.

Will it accomplish anything?

If they were to get their way it could block him from taking office. Of course, this also sets up a potentially endless cycle of retributions that Dems have NO idea what they are in for… and their own standards really are set low enough to destroy the same people who set this trap.

If Trump gets POLITI-blocked by these people, this sets up nicely for a long series of lawsuits that will make Nicholas Sandmann’s case look Jayvee by comparison.

If it were up to me, he would start by suing the Ad agency that ran Joe Biden’s ‘very fine people’ attack ad for defamation of character, followed by the New York Times (remember when their editors had that meeting to call Trump a racist in every story for the next two years?), and possibly CNN, using Project Veritas’ 9am Zucker calls to prove malicious intent.

That’s just the tip of the iceberg.

But winning that vote isn’t the only possible outcome, is it?

If Democrats LOSE that vote, or even worse — if the SCOTUS slaps them down as being out of line, throwing the case out of court — they have just breathed new life and energy into Trump, and made the Democrats look cynical and small.

Bad news for the RINOs.

There’s a saying that comes into play here: “You Come At The King, You’d Best Not Miss”

If Trump comes through the other side of this with his political Moxy intact, those who took their shot at him are going to find themselves in a pretty awkward spot.

What about the political agenda?

Do you REALLY think that the supposed ‘uniting’ of America Biden is pretending to champion is well-served by beginning his Presidency with a show-trial? Especially if it’s one that won’t even have the Supreme Court overseeing it?

The entire ‘return to normalcy’ ruse goes right out the window and strengthens Republicans’ hand for 2022.

Round and round we go.

Then we will finally get to vet that Burisma story that the Democrat impeachment witness from the FIRST impeachment fiasco was illicity using to spy on journalists and Trump associates about. (And why were Democrats so interested in watching how Republicans used the name, ‘Soros’?)

Nancy has stepped in it big-time, and she’s too dim-witted or blinded by rage to realize it.

Because she’s not the leader she thinks she is. She couldn’t hold a candle to these badass chicas…