Not surprisingly, Chinese officials are pushing back on a damning report of horrific sexual abuse that survivors of the Uyghur “re-education” camps are now telling.

While the Biden administration hems and haws over how to handle the human rights atrocities occurring in China against the Uyghur population after calling it a “genocide” without angering his buddy, Xi, or screwing up the lucrative business deals that his brother and son have worked to build up over the years, the abuse of the minority Muslim group continues apace.

UPI reports that tensions are rising between China and Britain. Recently, the British broadcast regulator, Ofcom, revoked the license of the state-run Chinese news organization, CTGN. Chinese officials have also claimed that the British news organization has “ideological bias” and has politicized the coronavirus pandemic.

Reporting on witness accounts of systemic sexual abuse and gang rape of women forced into “re-education camps” in Xinjiang was apparently just a wee bit too damning for the Chinese Communist Party.

China said a recent report from Britain’s public service broadcaster with details of systemic gang rape in China’s internment camp for Uighurs is “fake,” as tensions escalate between Beijing and London.

Here is just a bit of what the BBC reported with their headline quoting one of the women bravely coming forward with her story, ‘Their goal is to destroy everyone.’

The article begins with a woman who said that sometime after midnight, she and other women were taken to a room with no security cameras by men wearing masks and suits and raped and tortured.

Human rights groups say the Chinese government has gradually stripped away the religious and other freedoms of the Uighurs, culminating in an oppressive system of mass surveillance, detention, indoctrination, and even forced sterilisation.

The policy flows from China’s President, Xi Jinping, who visited Xinjiang in 2014 in the wake of a terror attack by Uighur separatists. Shortly after, according to documents leaked to the New York Times, he directed local officials to respond with “absolutely no mercy”. The US government said last month that China’s actions since amounted to a genocide. China says reports of mass detention and forced sterilisation are “lies and absurd allegations”.

Even in the United States, Chinese propaganda had even tried to sell the forced sterilization of Uyghur women as “liberating” them from being “baby-making machines.” 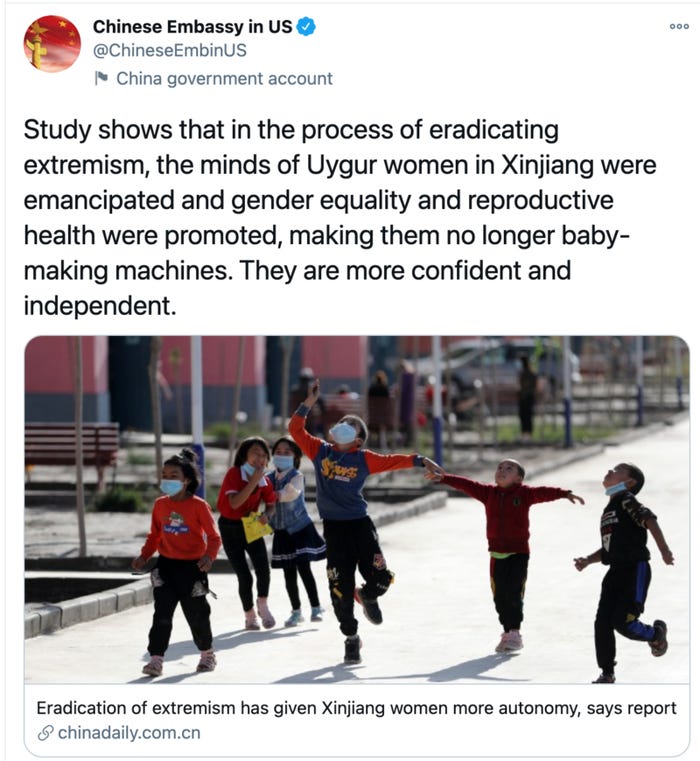 Surprisingly, Twitter had the chutzpah to remove the tweet for violating its terms of service. Good work, Twitter! It’s not often they do the right thing, so they should be praised when it happens.

Ziawudun’s tales of abuse is absolutely vile and although the exact details are difficult to determine as accurate, they have been corroborated by other survivors. She details humiliation, gang rape, torture, and sexual abuse.

First-hand accounts from inside the internment camps are rare, but several former detainees and a guard have told the BBC they experienced or saw evidence of an organised system of mass rape, sexual abuse and torture.

Tursunay Ziawudun, who fled Xinjiang after her release and is now in the US, said women were removed from the cells “every night” and raped by one or more masked Chinese men. She said she was tortured and later gang-raped on three occasions, each time by two or three men…

…The BBC also interviewed a Kazakh woman from Xinjiang who was detained for 18 months in the camp system, who said she was forced to strip Uighur women naked and handcuff them, before leaving them alone with Chinese men. Afterwards, she cleaned the rooms, she said.

“My job was to remove their clothes above the waist and handcuff them so they cannot move,” said Gulzira Auelkhan, crossing her wrists behind her head to demonstrate. “Then I would leave the women in the room and a man would enter – some Chinese man from outside or policeman. I sat silently next to the door, and when the man left the room I took the woman for a shower.”

The Chinese men “would pay money to have their pick of the prettiest young inmates”, she said.

Auelkhan told the BBC, “You can’t tell anyone what happened, you can only lie down quietly. It is designed to destroy everyone’s spirit.” She also said that she was powerless to resist.

Another woman, Qelbinur Sedik, who was coerced into teaching the Chinese language to the Uyghurs at a camp in Xinjiang said that rape and electrocution were routinely used as punishment. She said that electrified sticks were inserted into women to shock them.

“The screams echoed throughout the building,” she said. “I could hear them during lunch and sometimes when I was in class.”

Another teacher, Sayragul Sauytbay, said that rape was common and that the guards would regularly take the girls they wanted away.

She described witnessing a harrowing public gang rape of a woman of just 20 or 21, who was brought before about 100 other detainees to make a forced confession.

“After that, in front of everyone, the police took turns to rape her,” Sauytbay said.

“While carrying out this test, they watched people closely and picked out anyone who resisted, clenched their fists, closed their eyes, or looked away, and took them for punishment.”

The young woman cried out for help, Sauytbay said.

“It was absolutely horrendous,” she said. “I felt I had died. I was dead.”

It wasn’t just the physical and sexual abuse, the Uygurs were subjected to forced medical procedures and tests, as well as the “re-education” out of their alleged “wrong” beliefs. This was about breaking their spirit. The Uyghurs are being punished for being Uyghur.

In the camp in Kunes, Ziawudun’s days drifted into weeks and then months. The detainees’ hair was cut, they went to class, they underwent unexplained medical tests, took pills, and were forcibly injected every 15 days with a “vaccine” that brought on nausea and numbness.

Women were forcibly fitted with IUDs or sterilised, Ziawudun said, including a woman who was just about 20 years old. (“We begged them on her behalf,” she said.) Forced sterilisation of Uighurs has been widespread in Xinjiang, according to a recent investigation by the Associated Press. The Chinese government told the BBC the allegations were “completely unfounded”.

The end of the BBC article is absolutely gut-wrenching. Early in the article, Ziawudun talks about the young woman that she shared a cell — the woman was taken by a masked man into a room with no security cameras and when the screaming began, Ziawudun thought that the woman was being tortured. She was being raped.

Many in the community had turned to alcohol, Ziawudun said. Several times, she saw her former cellmate collapsed on the street – the young woman who was removed from the cell with her that first night, who she heard screaming in an adjacent room. The woman had been consumed by addiction, Ziawudun said. She was “like someone who simply existed, otherwise she was dead, completely finished by the rapes”.

“They say people are released, but in my opinion everyone who leaves the camps is finished.”

And that, she said, was the plan. The surveillance, the internment, the indoctrination, the dehumanisation, the sterilisation, the torture, the rape.

“Their goal is to destroy everyone,” she said. “And everybody knows it.”
Source: BBC

No wonder Chinese authorities are upset about the report. It’s unbelievably damning and the BBC has managed to confirm some of the details of Ziawudun’s story with corroborating reports and aerial images of the concentration camp.

The question is — will this article be considered “dangerous and derogatory content” by the censors at Google who have chosen to cozy up with the Chinese Communist Party for those sweet, sweet yuan?

But there are some of us in the West that are concerned about Big Tech censorship that is at the behest of the CCP, and that isn’t an ideological position. It’s one that values freedom.

Google and the other Big Tech organizations need to decide where they stand on freedom.

If this article disappears because they’ve forced our hand, then you know where they stand.