Back in October, the Canadian government called the reports about the colloquially called “COVID Camps” disinformation. It doesn’t look like “fake news” to a Canadian who was forced to check himself into one or face imprisonment.

Here is what the state-funded Canadian media was reporting at the time:

Canadians will not be forced into COVID-19 internment or containment camps, a spokesperson for Health Minister Patty Hajdu said Tuesday — taking aim at a disinformation campaign that has been circulating on social media for weeks.

The claim that the federal government is preparing to forcibly intern Canadians is patently false, the spokesperson said.

The federal government has announced funding for voluntary quarantine sites for some of the country’s homeless and has made plans to expand self-isolation capacity for returning international travellers without suitable places to go, but Canadians will not be compelled to leave their homes for so-called COVID “camps.”

“The answer is no, we’re not building containment or internment camps,” the spokesperson told CBC News.

“Disinformation like this is intended to deceive Canadians and cause fear and confusion. We encourage Canadians to double-check sources before sharing to avoid spreading disinformation.”
Source: CBC News

To be fair to the CBC, at least this is factually correct.

Travelers to Calgary and Toronto haven’t been “compelled to leave their homes” since they didn’t make it home in the first place. Congrats on the accuracy, CBC.

Fortunately for Canadians, there are a handful of real reporters left in the land of Leftwing Lunacy. Joe Warmington of the Toronto Sun is one of those old-school, walk the streets, talk to the people and ask the tough questions kind of a guy.

Warmington managed to score an interview with a Canadian man who was forcibly quarantined by the Canadian government after returning home from the Carolinas despite providing a negative COVID-19 test that is now required by all travelers. The problem is, just like with some other travelers, this man’s test wasn’t the correct microbial test, it was a rapid antigen test and so, he, like his fellow Canadian travelers arriving in Calgary, was forcibly detained at a federal quarantine facility.

Meet Steve Deusing, 34, a Toronto-area man who is telling his story to Warmington by use of a phone since he is quarantined on the 9th floor of the Radisson Hotel on Dixon Road next to the Toronto International Airport.

It’s difficult to hear what Deusing says, but give it a watch:

You will have to forgive Steve Duesing for not believing there are no COVID-19 internment camps in Canada.

“I’m in one,” the 34-year-old Scarborough man told the Toronto Sun on Tuesday.

“I was told when I arrived (at Pearson International Airport) Sunday night from Charlotte that it was either three days quarantine or go to jail.”

So he was escorted on a shuttle bus from Pearson to the nearby Radisson Hotel on Dixon Rd. But this is no normal hotel stay.

“I am not allowed to leave the room,” he said. “There is a guard at the end of the hall.”

So, he must remain in a ninth-floor hotel room while waiting for the results of a COVID test he was forced to take.

Joined by award-winning photographer Jack Boland, I interviewed Steve on the phone from the parking lot as we looked at him through the window of his room where he could see Tim Hortons, Harvey’s, Subway and Swiss Chalet.

“But I was told I can’t order in food,” said Steve.

Deusing says that he can’t have any food delivered or brought by family and the offerings that he’s getting at Camp COVID aren’t exactly the most appetizing.

He also said that he can’t even get a pack of cigarettes.

Do you find this an outrageous infringement on individual rights?

Well, then, you’re out of step with the majority of Canadians.

A new poll shows that Canadians are all for the suspension of rights to protect people from COVID-19. Warmington’s colleague, Anthony Furey, reports:

The kicker in this COVID Camp story is that Deusing paid $130 for a COVID test before he left Charlotte and it came back negative. He opted for the rapid test because results for the required molecular (PCR) test couldn’t be guaranteed in the timeframe that the Government of Canada mandates.

According to Travel.gc.ca, all international travelers must produce a negative PCR test that was taken 72 hours before the departure of their flight into Canada. The problem with this is that many clinics and COVID testing facilities say that results for the PCR test cannot be guaranteed within 72 hours — they often say results are available within 3-5 days. They then make the recommendation that the rapid antigen test, which is also done by nasal swab, should be taken instead. It’s no wonder travelers are getting the wrong test — they want to be able to have the results before their flight. The problem is, the intransigent Canadian government will not accept antigen tests, only molecular tests.

***UPDATE: Steve Deusing was released from the COVID Detention Center on Wednesday at 2 pm. The Toronto Sun posted photos of the kind of food that he received while being held against his will for not getting the proper COVID test. 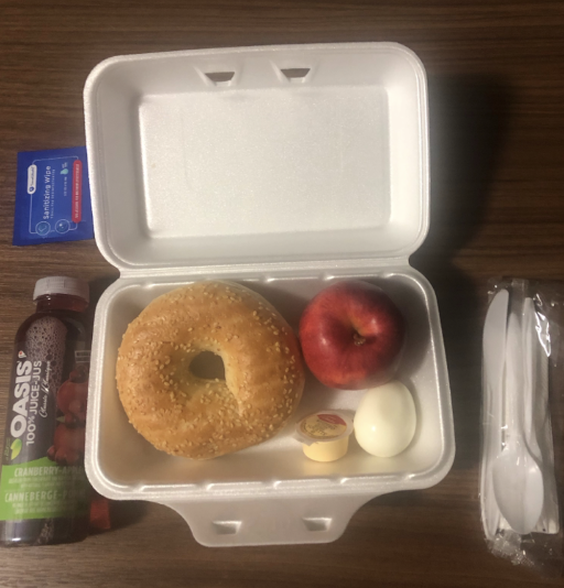 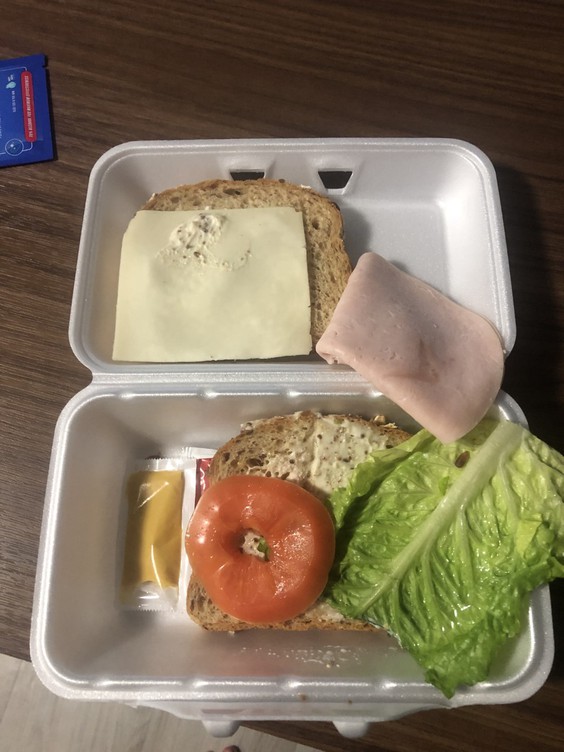 In addition, Deusing said that he was given 4 bottles of water for the day.

What the hell? This is food to feed a grown man? It looks more like one of the scant yet disgusting school lunches pushed by Michelle Obama’s failed “Healthy, Hunger-free Kids Act of 2010.”

Deusing also shared a photo of the welcoming environment in the hotel.

This is the hallway: 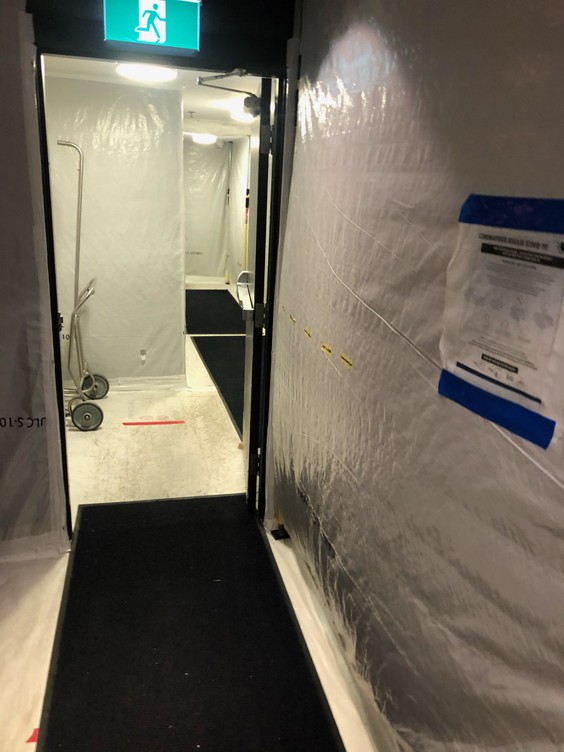 That doesn’t look like a dystopian nightmarish gulag at all.

I’m sure that anyone would love to be held there against their will under constant surveillance by guards after already testing negative for the virus, right?

Are these the same facilities and the same types of meals that international travelers will be subjected to after paying between $2,000 to $3,000 per person for their involuntary confinement for 3 days?

But don’t be under the impression that Deusing is “free” exactly despite testing negative for COVID-19 twice now.

After passing his second COVID-19 test, Steve was released at 2 p.m. Wednesday. Issued an  “Authorization to Leave a Quarantine Facility” document from PHAC [Public Health Agency of Canada], he was instructed to self-isolate for 14 days “or face a $1-million fine or three years in jail.”

They didn’t give him a ride on a quarantine bus.

“They said take public transit,” he said, shaking his head.

Duesing found himself under the boot of police-state style control.

“I feel I should let anybody else know who is about to come home to stay longer,” he said. “Being in this hotel was not fun or worth up to $3,000. I didn’t have to pay, but those that do, would be better to spend that money staying somewhere else.”

Because anyone to the right of Karl Marx’s positions have to be oh, so careful to not spread “dangerous or derogatory information” lest they be canceled these days, I do indeed stand by my categorization of the Canadian government in the headline as COVIDictators. These new mandates are diktats — no Member of Parliament voted on them, the Canadian people did not have a say in them, nor do they have any recourse to fight them. If they try to, they face massive fines in the hundreds of thousands of dollars territory or prison.

They are essentially Executive Orders issued from the Prime Minister’s Office and imposed on Canadians and anyone who dares to set foot on Canadian soil in the midst of a pandemic… unless you’re famous and/or rich, that is. Then you’re exempt.