What kind of new ridiculous claim is this?!

In a brief and puzzling article from 2019, the Palestinians have claimed that London’s iconic Big Ben was stolen from the Middle East in the early 20th century.

This really makes no sense at all.

In an article on Fatah, the official website of the Palestinian National Liberation Movement, the claim that the so-called “Jerusalem Clock”, which was built in the early 20th century during the Ottoman Empire, is actually being “hidden” by the British as Big Ben, which was built approximately 50 years earlier.

That’s quite the architectural achievement by the Brits!

Well, I guess they’ve always had that whole Doctor Who time-travel thing going on for decades.

Here is a screenshot of the entire article: 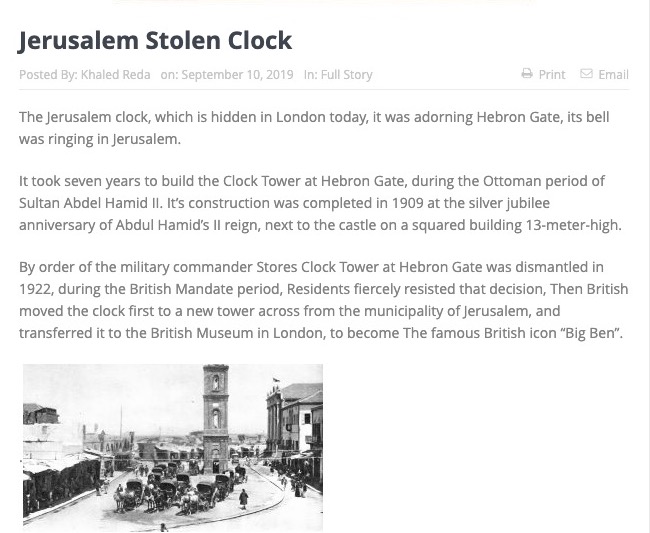 The Jerusalem clock, which is hidden in London today, it was adorning Hebron Gate, its bell was ringing in Jerusalem.

It took seven years to build the clock tower at Hebron Gate, during the Ottoman period of Sultan Abdel Hamid II. It’s construction was completed in 1909 at the silver jubilee anniversary of Abdul Hamid’s II reign next to a castle on a squared building 13-meter-high.

By order of the military commander Stores Clock Tower at hebron Gate was dismantled in 1922, during the British Mandate period, Residents fiercely resisted that decision, Then British moved the clock first to a new tower across from the municipality of Jerusalem, and transferred it to the British Museum in London, to become the famous British icon “Big Ben”.

Daniel Greenfield, an investigative journalist and writer, asks some important questions about this claim in his article in Frontpage Magazine.

How did Big Ben, which was built in 1859, become a Muslim clock tower from the 20th century?

Greenfield notes that there are some other minor differences between the clocks.

There are some other slight differences between London’s Big Ben and the “stolen clock” such as the fact that Big Ben is 316 feet tall while the ‘Palestinian’ clock tower was only 42 feet.

Then, he gets to the meat of the issue:

That’s a bold claim, but as the kids say these days, Greenfield brings the receipts. You’ll have to read his entire article for all of the details, but suffice to say that he’s got his ducks in a row.

There’s no more of a “Palestinian” people who were dispossessed by the Jews than Big Ben is a “Palestinian” clock stolen and passed off as London’s Big Ben. Both are fake history built out of resentments and garbled stories whose context has been lost, but whose hatreds remain real.

There were never any Palestinians. When the clock was built the region had been part of the Ottoman Empire, the last Caliphate until ISIS. The caliphates had settled it with Arab Muslim clans who dominated Christian refugees fleeing Muslim persecution, along with groups of other minorities from escaped slaves to gypsies, along with the indigenous Jewish population.

The Ottomans had become obsessed with clock towers as a symbol of their empire. But the Ottomans hadn’t invented them, they had adopted them from Europe, and planted them in major cities of the empire to create a common sense of time and belonging for their subjects.

Greenfield says that Sultan Abdul Hamid II was obsessed with clock towers and had them erected everywhere to show how modern the Ottoman Empire was, but this was all a sham — it was powered by the Germans. “Kaiser Wilhelm II gave Hamid a batch of clocks at the turn of the century which the Turks put into clock towers,” writes Greenfield.

He continues, “The ‘Palestinian’ clock likely used a German mechanism, was styled after European clock towers, and was a project of the Ottoman Empire.”

That doesn’t sound very Palestinian to me.

Here’s the real reason the clock tower at the Jaffa Gate was removed.

The Jaffa Gate Clock Tower, built out of white limestone, would have looked nice in the town square of some British village. The British objection to it was that it was very European and didn’t belong with the biblical setting of the Jaffa Gate. They weren’t repressing a brilliant example of Islamic architecture, but a mediocre Islamic imitation of European architecture.

Critics at the time had called it “that damned German tower”.

Older Ottoman clock towers had been styled after minarets. The clock towers in Israel looked European. Paradoxically, the British got rid of the Jaffa Gate clock because it wasn’t “oriental” enough for their taste. They were trying to protect the traditional architectural character of the region only to be accused by the Muslim leaders in Jerusalem who saw the clock tower as a symbol of their accomplishment, of stealing their clock because its glory put Big Ben to shame.

The Brits got rid of it because it was too European!

The end of Greenfield’s article sums up the whole “nontroversy.”

Palestine was the name given by the Roman occupiers to Israel. The Romans associated the area with the Philistines: the sea peoples who had come from the Aegean to colonize it.

The “Palestinian” people have spent two generations claiming to be the original indigenous population because they’re using the name of a European people given to it by a European empire. Anyone that hopelessly ignorant might as well claim that Big Ben is part of “Palestine”.

When your entire history is fake, you can believe anything.
Source: Frontpage Mag

Well, that was an interesting history lesson.

Perhaps those writers over at Fatah are just a little too obsessed with all things British…especially Doctor Who.

Here’s something that they haven’t seemed to learn — if you’re going to lie, at least make sure that it makes some iota of sense and isn’t so easily disproven.

Frankly, the Doctor Who Time-traveling Architect Theory is more believable than the Fatah article.

All The News That Fits The Leftist Ideology
June 22nd, 2021 The Lid