Lord Acton’s quote about power is being proven in real time. Trillion-dollar tech corps have enormous power, and aren’t afraid to bully people with it.

A lot has changed since the early days of the internet Wild West. Not so long ago, Google’s slogan was ‘Don’t be evil’, and Facebook’s was Move fast and break things.

Last year Zuckerberg busied himself with blurring the lines between corporate donations and civil servants while he executed a legally-dubious plan to leverage almost a half-billion dollars in flip a few key voting disticts in key battleground states. The dust STILL hasn’t settled from that mess, but fair or foul, we’re stuck with the outcome.

(This might be a good point in the story to remind our readers that Biden’s cabinet has more than a dozen crossovers from various Big-tech companies ‘advising’ him on the ‘best’ course of action. Are they advisors or lobbyists? Best for WHOM, exactly, for Big Tech, for Democrat interests, or for the ordinary citizen wanting to exercises his or her ordinary freedoms?)

With that context in place, here’s what’s happening in Australia.

The news IS the content, after all… and FB growth has come, in part, at the expense of traditional reporting sources.

Google, for all negative things we might otherwise had to say about them, agreed to pay ball, and entered into a revenue-sharing system.

Facebook’s reaction to the same news was somewhat less charitable.

They took the ‘take my toys and go home’ approach, and basically unfriended the whole damn country . . . globally.

Facebook has blocked any Australian news organization from posting their content via FB to anywhere in the world.

Here’s how an Australian member of Human Rights Watch presented the issue: 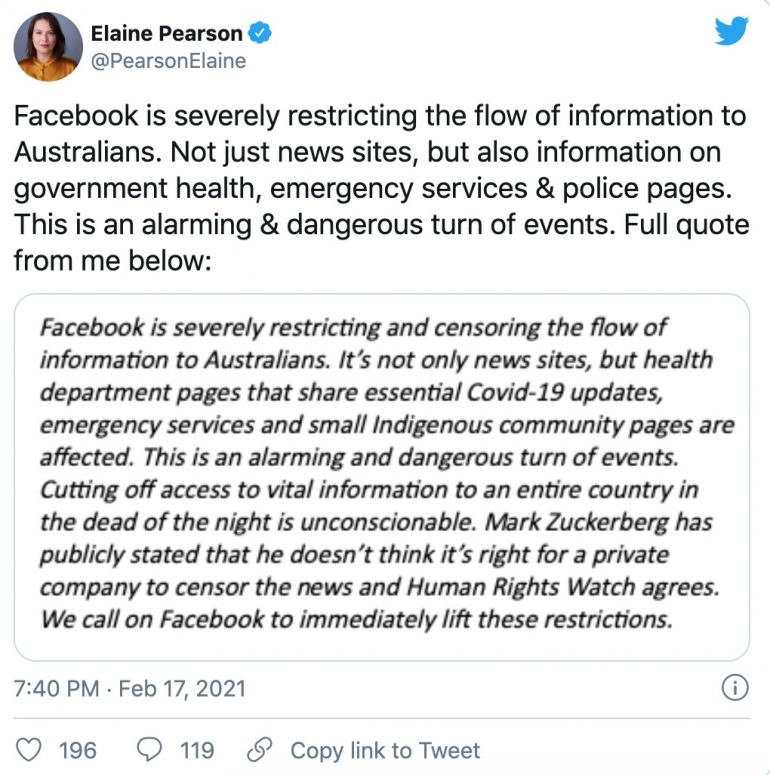 They overplayed their hand.

They blocked a number of GOVERNMENT pages. Even wiped some of them… including things COVID and Mental Health.

Not a good look there, Herr Zuckerberg.

“The actions we’re taking are focused on restricting publishers and people in Australia from sharing or viewing Australian and international news content,” a spokesperson said in an emailed statement.

“As the law does not provide clear guidance on the definition of news content, we have taken a broad definition in order to respect the law as drafted. However, we will reverse any Pages that are inadvertently impacted,” the statement read. — CNBC

If you are wondering who the good guys are in this story, good luck finding one. Red State’s summary of the situation seems pretty strong:

Meanwhile, I’m not really that sure there’s any good guys here. Facebook is obviously a greedy company that wants to have people provide free content for its platform. In turn, they can go make billions off of without paying just compensation for others’ work. Meanwhile, the Australian government is doing this to fund a “diverse” media sphere, which is just woke speak for propping up failing, left-wing industries. Australia’s government has also forced massive, oppressive lock downs over the last year so they are hardly a bastion of liberty. Maybe we should just let them fight?

But on the more macro scale, big tech companies having this kind of power to strong arm anyone, including a large country, who dares to try to take a slice of their profits (one which seems kind of fair, to be honest) is an issue, and it’s only going to get worse. –RedState

China Threatens To Leverage Key Resources To Force Its Will On Others (Like Us)
February 24th, 2021 The Lid

PROPAGANDA FAILURE: RULING CLASS UPSET AT MSM “WHY WOULD ANYONE GET THE JAB AFTER TH
February 24th, 2021 DC Clothesline