Father Kevin O’Brien, a Jesuit priest, has known the Biden family for about 15 years. He officiated the Mass for Biden’s two other inaugurations as Vice President.

Santa Clara University is located in Silicon Valley and is ranked as one of the top 25 universities for undergraduate studies in the country. The private, Catholic university has an annual undergraduate enrollment of 5,500 students, and boasts a $1 million endowment. Former California governor Jerry Brown and soon-to-be-former California governor Gavin Newsom are among Santa Clara alumni.

A statement from Santa Clara board of trustees chairman John M. Sobrato said that O’Brien had “exhibited behaviors in adult settings, consisting primarily of conversations, which may be inconsistent with established Jesuit protocols and boundaries.”

The statement didn’t go into any details about the alleged misconduct, but it did say that the trustees “support those who came forward to share their accounts.”

O’Brien gave the service at Cathedral of St. Matthew the Apostle, one of the most prominent Catholic churches in Washington, in January for Biden, who is the nation’s second Catholic president, as well as Vice President Kamala Harris, their families and elected officials before the inauguration ceremony at the U.S. Capitol…

‘Jesuits are held to a professional code of conduct, and the Province investigates allegations that may violate or compromise established boundaries,’ Primrose told the newspaper.
Source: Daily Mail

According to the university, O’Brien joined the Society of Jesus in 1996 and was ordained to the priesthood in 2006.

O’Brien has shown his support for the pro-abortion “staunch Catholic” Joe Biden on Instagram. 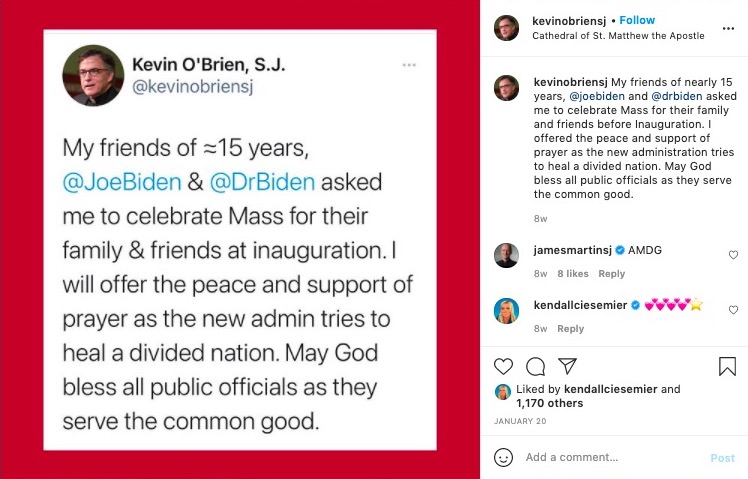 O’Brien also shared a photo of the cover of the program for the Mass of Thanksgiving commemorating the inauguration of President Biden. He wrote, “‘Home, not fear…unity, not division.’ These are some of the words that resonated deeply with me on this historic day. After so much darkness, the dawn breaks today, this inaugural day. Let us meet the dawn together, brothers and sisters, emboldened by our faith and civic conviction, full of promise and hope.” 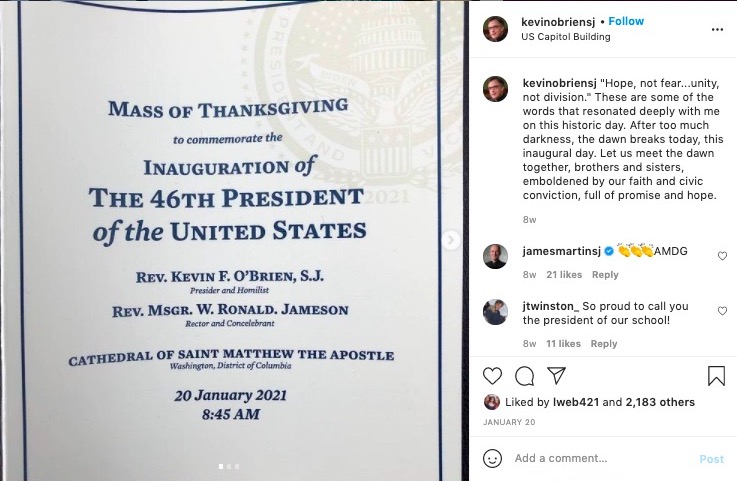 It’s always astonishing to see Catholic leaders show support for Democrats when one of the central tenets of the faith — the sanctity of life — is tossed aside as a “choice” by Democrats.

But then, Democrats are 0 for 10 when it comes to aligning their worldview with the Decalogue.