You can’t truly say you are helping the oppressed when people who were fleeing for their very lives are stuck in a holding pattern in favor of a preferred special interest group.

The problem on the border isn’t that people are coming in — we have always welcomed a number of people in. The problem is that we are prioritizing people deliberately rushing the border rather than seeking refuge in legitimate ports of entry.

We have created a perverse incentive structure.

Border crashers get bumped to the front of the line and are guaranteed entry. Meanwhile, people who applied through lawful means, seeking asylum because they faced violent religious persecution in their country of origin.

One asylum applicant, who had gone through traditional legal channels contacted Dan Crenshaw to address his frustrations and the fact that he is getting nowhere. 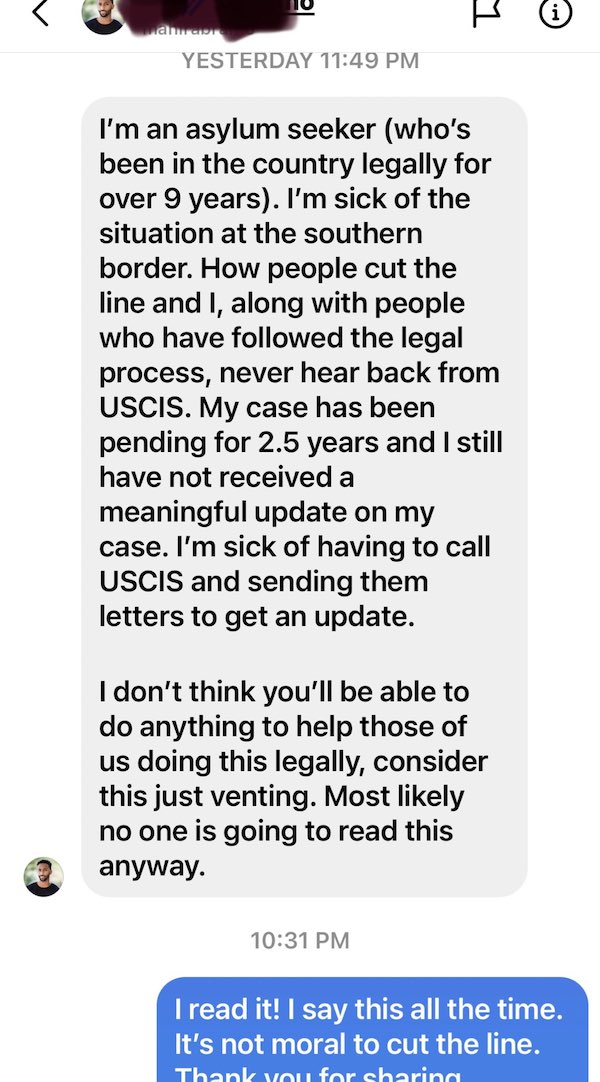 I’m an asylum seeker (who’s been in the country legally for over 9 years) . I’m sick of the situation at the Southern border. How people cut the line and I, along with the people who have followed the legal process, never hear back from USCIS. My case has been pending for 2.5 years and I still have not received a meaningful update on my case. I’m sick of having to call USCIS and sending them letters to get an update.

I don’t think you’ll be able to do anything to help those of us doing this legally, consider this just venting. Most likely no one is going to read this anyway.

Crenshaw lets us know a little more about the author… for one thing, he was from Egypt. Which, back in 2011 was in the middle of something called the Arab Spring. That was about when “60 Minutes” reporter Lara Logan barely escaped from a mob with her life after being indecently assaulted.

Oh, and Coptic Churches were being bombed too.

In fact, we remember when Obama/Biden went to court fighting to send someone who had been GRANTED religioius asylum by our courts BACK to their country of origin because they were the wrong kind of refugee.

Here’s what the left gets wrong about Republicans and immigration.

We are not opposed to immigration. We are opposed to UNLAWFUL immigration. We’re cool with an orderly application process, where people file paperwork and wait for the destination country to deside whether you get to come in, based on the specific circumstances of an individual situation.

We are NOT cool with is a mad rush of people swamping our borders, endangering would-be immigrants’ lives, enriching criminal cartels, focing the creation of an enormous government department to deal eith these new arrivals, and create a gazillion-dollar industroy of grifters, social workers, activists, and law firms ready and willing to belly up to the trough for a slice of the pie that comes with this crisis.

It doesn’t matter HOW much you dress this up in the language of compassion. It is as unfair as it is reckless, shortsighted, and dangerous to both those making the trip, and those who are arriving.