Thousands of people are coming across the border, many with COVID-19, and they’re being packed into crowded facilities. Isn’t that what constitutes a “super-spreader” event to the Left?

If a couple of hundred people outdoors in the Rose Garden at the announcement of Amy Coney Barrett as a Supreme Court nominee was a “super-spreader event” according to Dr. Fauci then surely 400 people crammed into a tent with a capacity of 260 is a “super-spreader” too.

Could this be Joe Biden’s Hurricane Katrina moment just two months in?

.@MarkMeadows joins “Justice” to discuss the border crisis and he says, “This is Biden’s Hurricane Katrina moment.” pic.twitter.com/d5o8XWnjgF

President Joe Biden’s primary campaign promise was to control the pandemic. His administration’s handling of the surge at the border completely undermines that.

The New York Post reported earlier this month that there is a “surge” in COVID-positive illegal border crossers, and just a few days ago DHS admitted that not all of the people being released into the U.S. interior are being tested for the coronavirus — despite the White House’s claim to the contrary.

Is this how Joe Biden plans on slowing down the pandemic? Allowing people to cross the border illegally while COVID-positive and then seeding them out into various parts of the U.S. interior?

Illegal border crossers have been very clear that they are coming across the border because of Joe Biden’s new border policies.

This new “humanitarian” policy has been seen as an incentive for economic migrants from Guatemala, Honduras, El Salvador, and Mexico to falsely claim asylum and illegally cross the border — especially families.

They’re not hiding it, either. They’re coming wearing “Biden Please Let Us In” shirts.

While the Biden administration continues to blame the Trump admin for the sudden record surge at the border, more people continue to come.

Let’s be clear here, Joe Biden invited them, and even as DHS Secretary Mayorkas insists that the border is closed, he’s also saying “don’t come now” in order to let the administration get systems in place first. That isn’t the same thing as “don’t come illegally.”

The Biden administration has tried to be cagey about this situation at the southern border, but it’s getting very difficult to not call it a crisis. After all, FEMA is now helping with the minors at the border, they have opened up new facilities to deal with the surge of unaccompanied minors, and despite the assertions that they’re deporting people, ICE is paying for hotels for asylum claimants while the feds process the backlog of new arrivals.

Despite being warned during the transition that a surge was going to happen if they ditched the Trump-era policies, the Biden administration did just that and is now acting surprised that people are immediately surging the border as Biden said should happen at one of the Democratic debates.

It’s so bad that even a Democratic Congressman is getting very frustrated with the Biden administration’s handling of the situation.

Rep. Henry Cuellar (D-TX) shared photos to Axios of the facilities for migrants in Donna, Texas and it’s pretty clear that these are not allowing for “social distancing.”

There’s a reason for that. They are crowded.

As of Saturday, CBP has 10,000 illegal border crossers in custody according to Axios. More than half of them are unaccompanied minors, thousands of whom are being held longer than 72-hours.

Each of eight “pods” in the so-called soft-sided facility has a 260-person occupancy, said Rep. Henry Cuellar (D-Texas), who provided the photos to Axios to raise awareness about the situation. But as of Sunday, he said, one pod held more than 400 unaccompanied male minors. 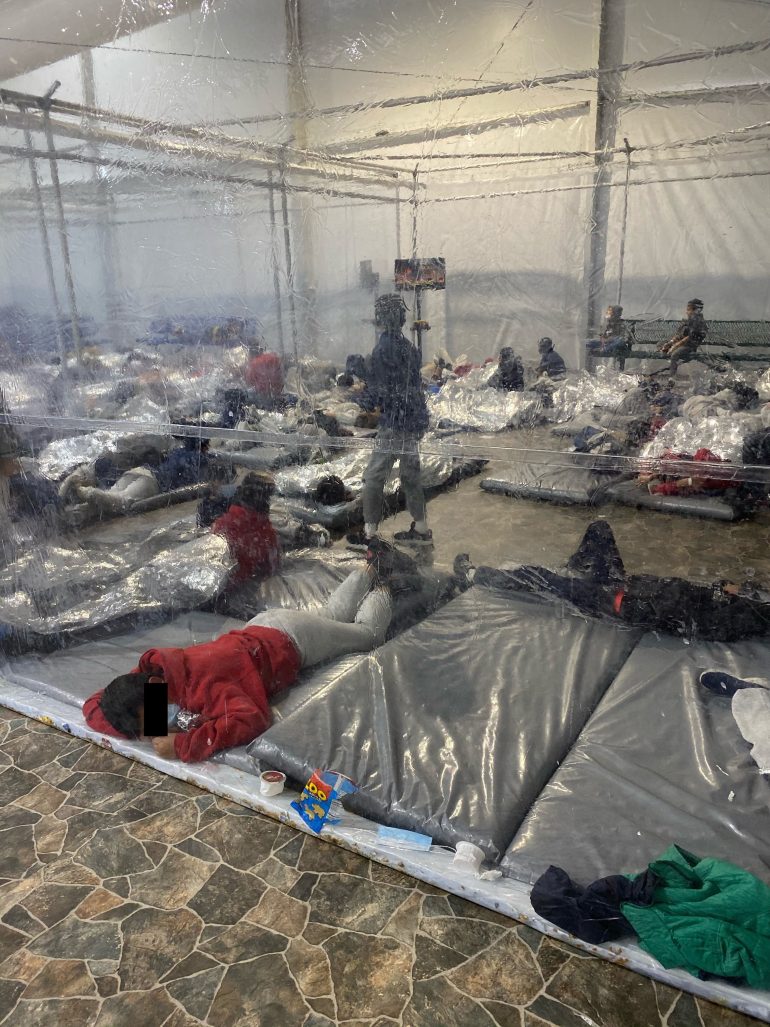 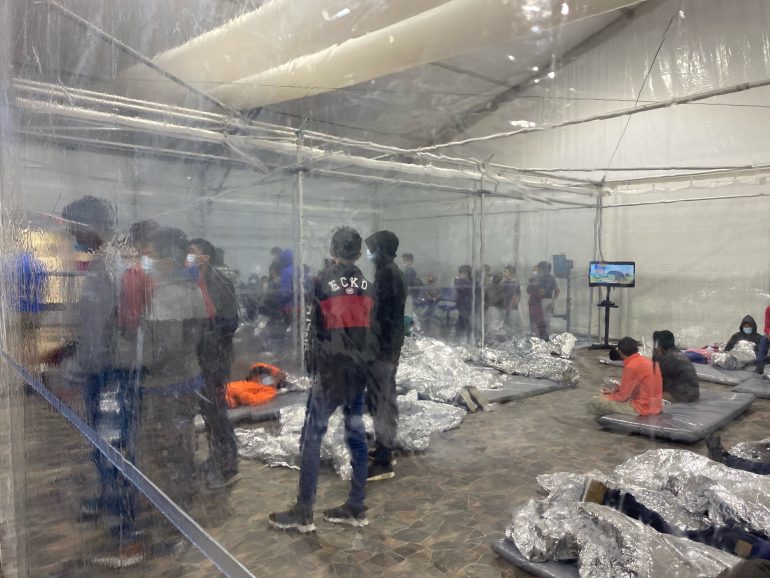 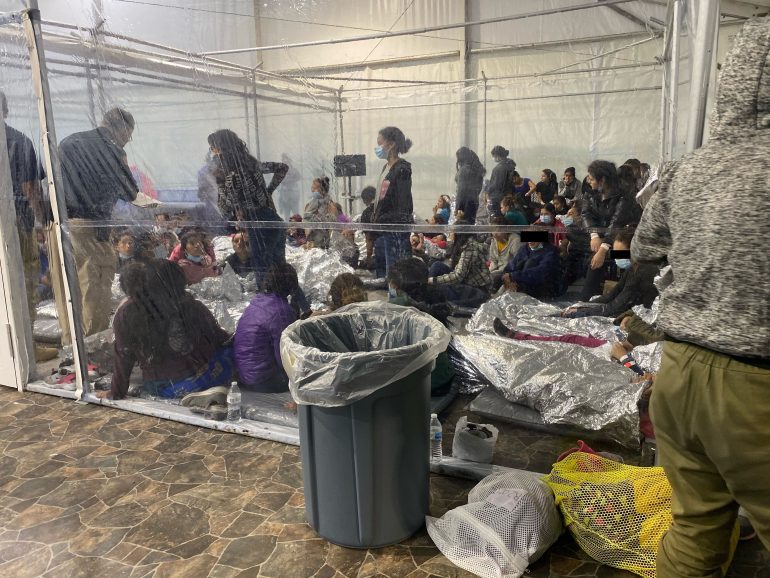 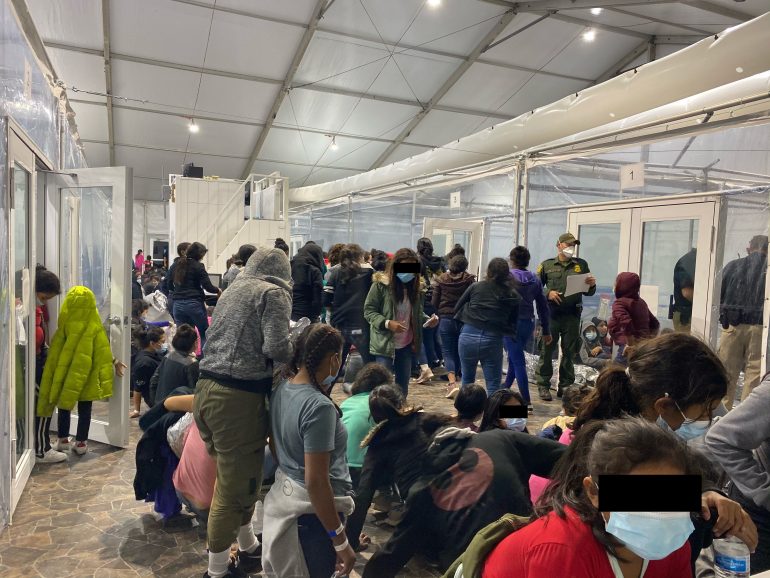 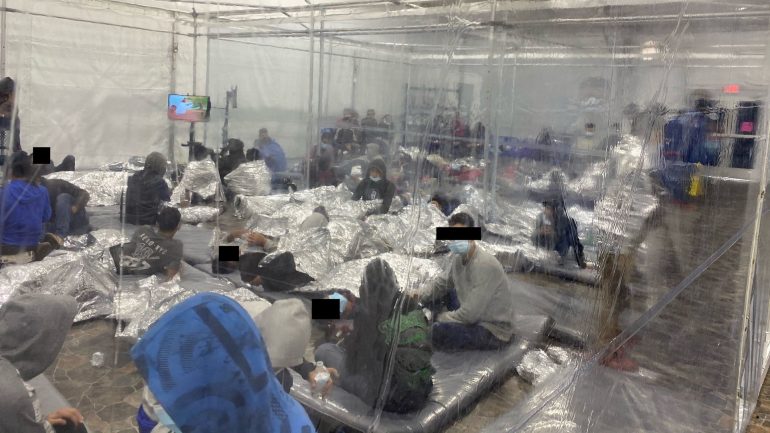 While the Biden administration insisted that the reopening of facilities was due to “social distancing” in order to follow pandemic protocols, Axios notes that some facilities in the Rio Grande Valley sector — which includes the one at Donna — has “far exceeded” even the non-pandemic limits.

Americans want border security, and the rule of law enforced at the border. The United States has a process for asylum claims and another one for the people that want to come for the American dream of “a better life.” It’s disgraceful that the Biden administration is allowing people to walk across the border, skip the line, and jam up the system for people going through the process legally.

But worse than that — desperate people are risking their lives and their children’s lives to make the dangerous journey with the help of even more dangerous people — coyotes.

Human trafficking cartels are loving this. They’re raking in millions every day, and if they lose a few, oh well. There are lots more that want to come over. Besides, they’ve already been paid.

While Joe Biden says that if we’re all very, very good, wear masks and get vaccinated, we just might be able to have a family BBQ for the Fourth of July, at the same time, he’s allowing COVID-positive illegal border crossers into the country. How’s that for a dichotomy?