Oops! It looks like somebody said the quiet part out loud!

On Thursday, the CEO of WarnerMedia, Jason Kilar, admitted that the pandemic has been a boon to CNN’s ratings.

That would be this Jason Kilar: 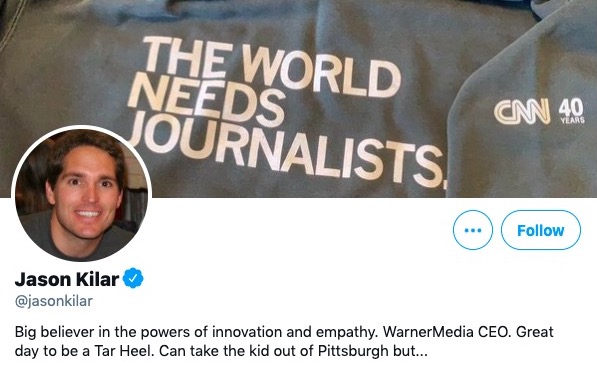 Interesting cover photo, Jason. Maybe you could tell someone over at CNN that “The World Needs Journalists.”

Kilar made the comments about COVID and ratings during the AT&T Inc at Morgan Stanley Technology, Media and Telecom Conference which was held virtually.

Coronavirus has killed over 500,00 Americans but CNN’s parent company managed to find a silver lining to the pandemic — it’s lifted the liberal network’s ratings.

WarnerMedia CEO Jason Kilar was asked on Thursday if CNN, which falls under WarnerMedia, has the ability to keep its ratings momentum going during the Morgan Stanley Technology, Media and Telecom Conference.

“It turns out that pandemic is a pretty big part of the news cycle, and that’s not going away anytime soon,” Kilar said, noting that things are different these days “from a political drama perspective” but luckily for CNN and WarnerMedia they still have the deadly virus to fall back on.

SWINEBURNE: Yes. Go ahead. Yes, I was just wondering what your perspective is on the ability for CNN to keep this momentum and what, I guess maybe knock on wood, is a slower news cycle for a bit?

KILAR: So it’s a great question, Ben. I’d say that it turns out that pandemic is a pretty big part of the news cycle, and that’s not going away anytime soon. And so there’s no doubt that from a political drama perspective, that’s different. I’d say in many ways, that’s good for our society. But if you take a look at the ratings and the performance, it’s going well. And I think it’s going well because, (A), the team at CNN is doing a fantastic job. And (B), it turns out that the pandemic and the way that we can help inform and contextualize the pandemic, it turns out it’s really good for ratings.

Here is a screenshot of the relevant portion of page 14 of the conference transcript:

That’s not all that Kilar said, however. He also asserted that CNN was “killing it” in cable news and that they were “the #1 cable channel” in the key 18 to 54 demographic.

We’re gonna need a citation for that claim.

Kilar is stating it as fact and yet…

Despite the coronavirus uptick, CNN still finished behind both Fox News and MSNBC among total viewers during the month of February.

While most Americans are eager to return to normal, pre-pandemic life, CNN’s parent company is enjoying the benefits of an uptick in viewership.
Source: Fox News

Kilar is now walking back his comments.

Wall Street Journal reporter Joe Flint tweeted, “It turns out the pandemic is a pretty big part of the news cycle and that’s not going away any time soon…It turns out it’s really good for ratings.” Jason Kilar on post-Trump CNN. Careful. That’s awful close to Moonves line that Trump may be bad for U.S. but he’s good for CBS.”

Kilar responded, “I agree Joe. I would like nothing more than for this pandemic to be well behind us. I mean that with every fiber in my body. I wish I could go back and be more thoughtful about my communication.”

I agree Joe. I would like nothing more than for this pandemic to be well behind us. I mean that with every fiber in my body. I wish I could go back and be more thoughtful about my communication.

Happy to. I am sorry for the sentence and for uttering it. My apologies. Thx for highlighting it and holding me accountable.

Kilar recognizes how ghoulish his comments were, so that’s good.

But, honestly, he’s not exactly wrong. The pandemic has been really good for a lot of people. Until his recent #MeToo scandal that is taking the oxygen from his very real nursing home scandal, Governor Andrew Cuomo’s political fortunes were looking like they might lead all the way to a White House run.

Speaking of the White House, the pandemic was great for the twice-failed Presidential hopeful who now resides at 1600 Pennsylvania Avenue. It was fantastic for Joe Biden, who was able to hide the worst aspect of his Presidential run — himself — in his basement for the duration of the campaign while making it a virtuous act in the name of “public health.” So says the new book, “Lucky: How Joe Biden Barely Won the Presidency,” by Jonathan Allen, senior political analyst for NBC News, and Amie Parnes, a senior correspondent with The Hill.

If only there was some news that they could report on like:

You’d think that reporters would be interested in those sorts of things. Ah. Maybe that’s the problem — CNN doesn’t have those.