This here is an ugly situation, with plenty of blame to go around… with an even uglier ending.

Inmates were frustrated by specific conditions in the prison — including long periods without showering, backed-up toilets, power failures etc.. They took the opportunity of the correction officer bringing medication to the prisoners to overpower the guard.

One of the prisoners, the one who had been handed the guard’s cellphone for the live stream, even sounded sympathetic to the correction officer — ‘nothing personal’ — and while showing images of the condition of his cell, and toilet while making those complaints about the conditions.

Authorities arrived, saw the guard handcuffed in a vulnerable position, In the video, the (as-yet unnamed) prisoner appeared to be holding a weapon. At some point in the interaction that followed (not included in the video) the prisoner was fatally shot.

The correction officer himself was able to walk out under his own power. He was taken to hospital, with little said about his condition other than that he is expected to be ok.

The specific incident itself — a Correction Officer being held hostage by prisoners by an armed guard — led to a fatal confrontation. But the aggravating incidents that led up to this moment — if accurately reported by the prisoner filming on the live stream — are just as relevant to the bigger story.

Here is the text that goes along with this video:

Moment an Oklahoma prison officer was held hostage by inmates before one of them (inmates) was shot dead by police officers.

The hostage situation unfolded on Saturday evening at the Oklahoma County Jail and ended after police officers shot and killed an inmate who took a correctional officer hostage.

Shortly after 4 p.m, a correctional officer was overrun by at least one inmate during pill pass and taken hostage. According to Greg Williams, the administrator for the Oklahoma County Jail Trust, the inmate took the officer’s radio and keys and released many of the other inmates on the 10th-floor pod.

In the livestream which took place on the Facebook page of the prison officer, an inmate looked into the camera and said that they were doing what had to be done because they have no food and cannot take showers at the jail. Another inmate is then seen standing over the crouched detention officer with his hand on the back of his neck, berating him.

The inmate holding the phone can then be heard saying that the water in the jail does not work and the toilets are backed up.

The shooting incident occurred after jail staff notified local law enforcement agencies, and officers with the Oklahoma City Police Department and the Oklahoma County Sheriff’s Office responded to the scene.

Oklahoma County Sheriff Tommie Johnson III claimed officers tried to de-escalate the hostage situation, but shots were fired after the inmate who had the correctional officer in a “hostage position” held something to his neck.

“Lethal force was taken, and the suspect was shot on scene. We were able to get the detention officer out safely.”

The correctional officer was taken to a hospital for treatment. Although authorities did not release the extent of the officer’s injuries, they said he is expected to be OK.

Police Chief Wade Gourley said the department’s investigation into the hostage situation and deadly shooting is in the preliminary stages, and he didn’t have too many details as of Saturday night. Several investigators have been called in to conduct interviews, and the Oklahoma City Police Department will take the lead on the investigation.

After the incident, a group of protesters gathered to protest against the inmates’ condition.

Because there is a strong possibility this video will be spiked, we will include a few screenshots. 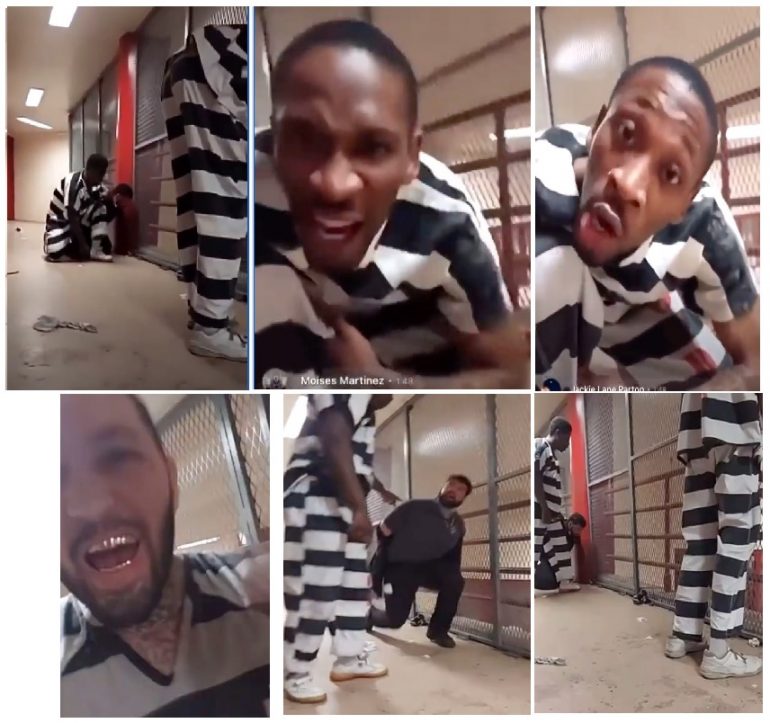 The website ‘Heavy‘ has a longer clip than the one we were able to embed for this story, which will give more context than the 2-minute clip we have here.

In the press conference, Williams said that just after 4 p.m. on March 27, 2021, an officer was “overrun by at least one inmate and taken hostage.” His radio and keys were taken by the inmate, who freed other inmates who were on that pod.

Staff notified other law enforcement officials. They responded and “helped us resolve the incident,” he said.

The sheriff, Tommy Johnson III, said that there was a hostage situation that unfolded.

The Sheriff’s Department requested mutual aid from Oklahoma City police. “They go and identify the suspect. They try to deescalate. The inmate has the detention officer in a hostage position and something held to his neck. Shots were fired, and lethal force was taken, and the suspect was shot on scene. We were able to get the detention officer out safely.” Oklahoma City officers were among those who did the lethal force.

The Oklahoma City Police Chief Wade Gourley said that he only had preliminary information on the situation. “We went in with county deputies to try to help them resolve the situation… I’m just glad the detention officer wasn’t more seriously hurt and that we were able to get him out of there and protect him.” —Heavy