This is a very bad look since the union recently held a vote to return to in-person learning and the result was 91% against the move.

This is the same union that made some outrageous demands over the summer before schools could reopen.

Union leader Cecily Myart-Cruz criticized the incentives as out-of-touch with the situation in L.A. Unified. pic.twitter.com/ebr1n1QBGK

The union’s suggestion that racism is the motivating factor has become nefarious. One parent said that the union was “profiling” their opposition after she has been openly critical of the union’s position on school reopening. The parent is also an educator and is Middle Eastern.

Recently, the UTLA members conducted a 5-day vote on returning to in-person learning. The result — 91% of the more than 25,000 UTLA members voted to not return to classrooms.

Now, a leaked post from a private Facebook Group for the powerful union instructed their members to not post Spring Break vacation photos on their personal social media pages because it wouldn’t reflect well on the union as they continue to push back on returning to in-person learning. The Facebook group has just a fraction of the 25,000 union members following, but it isn’t insignificant at over 5,700 members.

A screenshot obtained by FOX 11 shows UTLA teachers being warned to not share spring break vacation photos to social media as the union continues to push for a safe return to in-person classes.

The screenshot appears to be from a private Facebook group titled, “UTLA FB GROUP- Members Only,” and it has about 5,700 members. In one of the posts from the private group, teachers from the union are being asked to not share vacation photos or show that they’re traveling outside of the country.

“Friendly reminder: If you are planning any trips for Spring Break, please keep that off of Social Media. It is hard to argue that it is unsafe for in-person instruction, if parents and the public see vacation photos and international travel.”
Source: Fox 11 Los Angeles

Bill Melugin of Fox 11 Los Angeles posted a screenshot of the message on Twitter.

Statement from UTLA to @FOXLA when we asked about the post:
“We have a diverse membership and they are able to post their views on personal Facebook pages and in this Facebook group – however UTLA does not monitor nor is responsible for the content.” Parents angry. Story at 10pm. 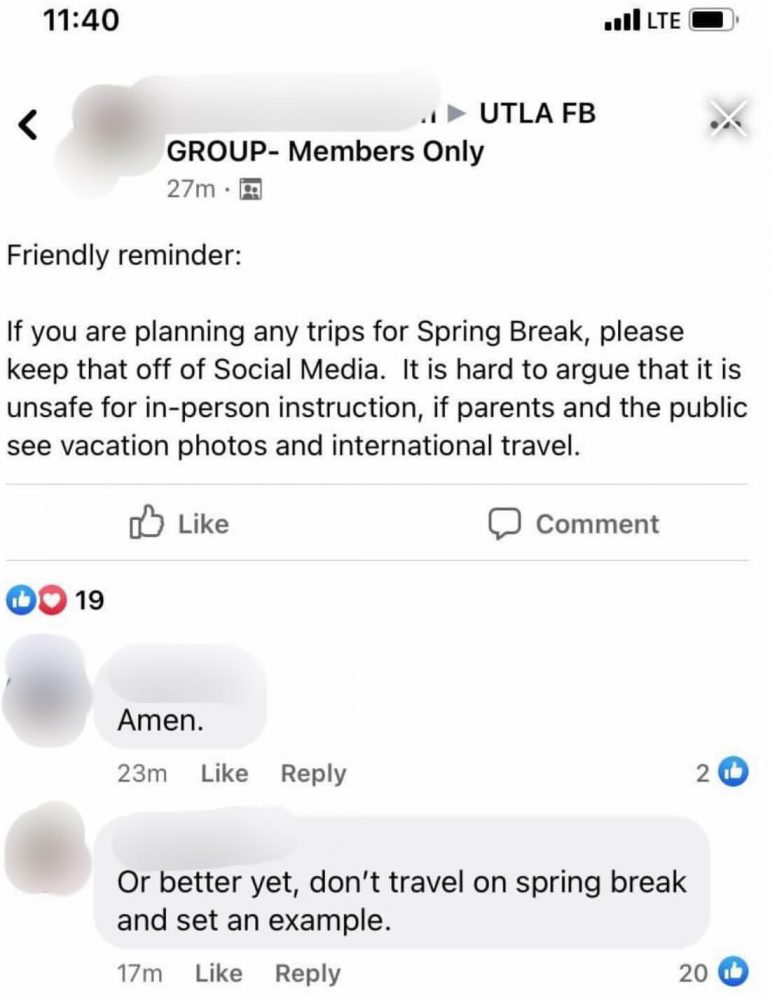 The union response was some pretty weak sauce.

FOX 11 reached out to UTLA for comment and the union issued the following statement:

“We have a diverse membership and they are able to post their views on personal Facebook pages and in this Facebook group – however UTLA does not monitor nor is responsible for the content. We do not want to discourage a robust dialogue for members in the public square of opinion.”
Source: Fox 11 L.A.

Do you believe that codswallop?

Do you think that the union wouldn’t have anything to say to members who posted “All Lives Matter” or “Blue Lives Matter” in response to “Black Lives Matter”? They’d have no problem at all for a member to post some hunting photos? It wouldn’t be reported as “hate speech” if a girls’ track coach shared a Prager U video in support of women’s sports? Come on! We know exactly how that would be handled.

But let’s be clear what this whole situation is with the UTLA — they don’t want to go back to classrooms but they still want to collect paychecks and live their lives normally and go on vacation while children are suffering from learning loss, depression, and are contemplating self-harm and suicide at increased rates.

The Science™ isn’t even on their side as study after study all over the world shows that children aren’t significant vectors to spread COVID-19 and it’s safe to open schools.

The union leader can scream “racism” is a factor in reopening schools as much as she wants to, but facts aren’t on her side. It’s the low-income, minority children that are hurt the most from school closures because they don’t have alternatives.

This union has been absolutely selfish and completely indifferent to the needs of children and families during this pandemic.

So, who is it that’s really hurting the black and brown kids? That would be the UTLA for opposing the return to in-class learning.