We are now one step closer to seeing Elon’s dream of interplanetary travel come to fruition.

A test vehicle has successfully landed back on the Earth’s surface after a sub-orbital flight.

(Mostly. But we’ll get to that later.)

Those tasks will continue to be refined as SN10 rose into the South Texas skyline, initially under the power of her three Raptor engines. During ascent, one engine shut down, followed by a second, before the final remaining engine reoriented the ship for its belly-flop descent before it too shut down.

For SN8 and SN9, both vehicles showed good aerosurface controllability during the belly-flop back to the landing site. This was a major objective for Starship. This was once again the case for SN10.

However, once again, the focus was on the flip and landing burn, with SN8 completing the flip before losing CH4 (liquid methane – fuel) Header Tank pressure resulting in a “hard” landing, while SN9 lost an engine during the flip that led to a crash into the landing pad.

Starships are gigantic. Each Starship is ~50 meters tall, but this is only the second stage! This would be later mounted on a booster stage called Super Heavy. SuperHeavy is 70 meters tall … so a fully stacked Starship is a record 120 meters tall. SaturnV was 111m. @elonmusk pic.twitter.com/qKZSKzZbcu

If you were wondering about scale, look WAY down on the bottom right where you can get a known reference against which to measure the rest.

Landing would be the critical test…

(That was from a distance)

This is real footage. That’s SpaceX and 2021 for you! Congrats SpaceX team, you are heroes! ? pic.twitter.com/VGLZfhWyGu

(This one was a better view)

Someone liked what he was seeing: 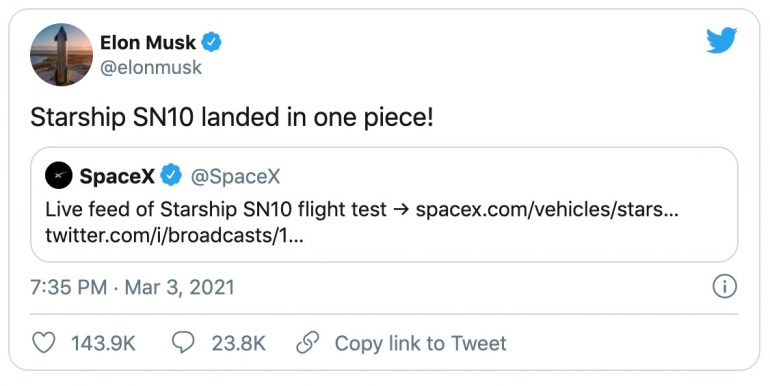 Then, 10 minutes after it landed, came the unexpectedly firey finish…

(Here’s a VERY close-up view of both.)

That video points out that the rocket isn’t ‘quite’ standing vertically before … something goes boom.

Early reports were that a methane leak may have triggered an explosion.

The rocket may not have survived the landing, but it DID stick the landing. That was the goal, and anything else is just a performance issue for the engineers to fix in the next generation.

This is what testing is for, folks.

Science is complex, but it isn’t complicated.

It just took someone with vision and a willingness to put his money where his mouth is.

Our true history-changers are always men and women of vision. Want more of that in your life? Level up your diet. Digest this…