In case anyone out there was still wondering if the political game in the information war is being rigged, this should give some clarity.

WaPo and the New York Times never had their Pulitzers revoked when their Russian Collusion stories turned out to be entirely bogus … they never get hounded as ‘fake news’ despite the egg they had on their face again and again.

If you wondered about just how fake WaPo’s reporting is, you could ask them about the quarter BILLION dollar check they ended up cutting to Nick Sandmann.

Stupidity like that gets a pass, and Democrats have no problem broad-brushing all Republicans with the worst sort of calumnies they can dream up, making us all out to be knuckle-dragging, mouth-breathing, bigots and insurrectionists barely capable of monosyllabic grunts, or something.

Their latest game is to pretend like all of us are tinfoil-hat-wearing conspiracy theorists.

So, what happens when the script gets flipped, and light is shed on the dumb stuff THEY believe?

That’s what happened when Jack Posobiec started trolling the left with their own language.

The term ‘blue-anon’ was being leveraged by Jack and others to mock leftist believing dumb conspiracy theories.

(For context: Jack has never subscribed to QAnon or their claims, and has been openly critical of them for quite some time. Few on the left have been similarly critical of the various fever-dream conspiracy theories whipped up by the other side.) 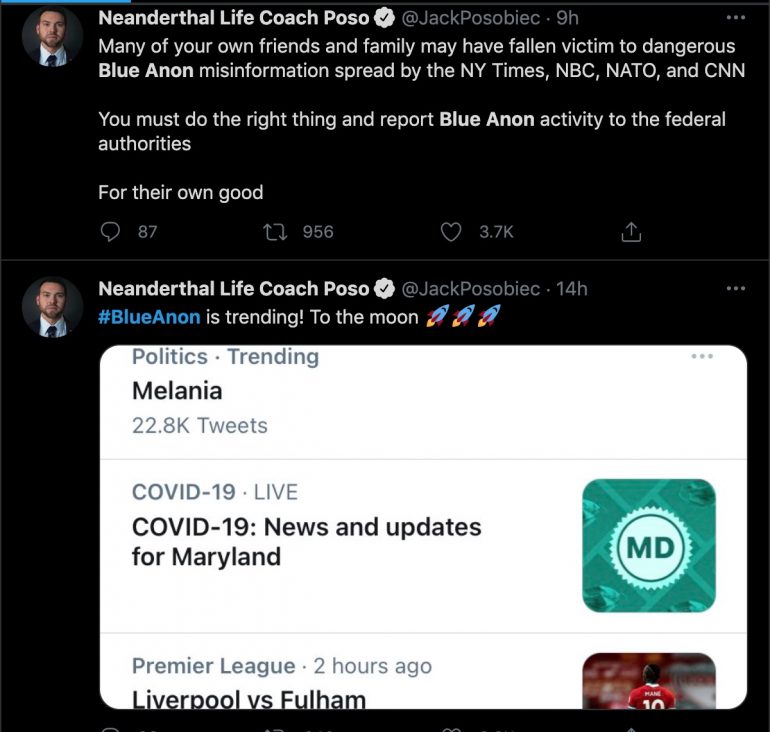 If you click on that photo, it opens wider. And appearing above Melania’s name is this:

Blue Anon even found its way into Urban dictionary. 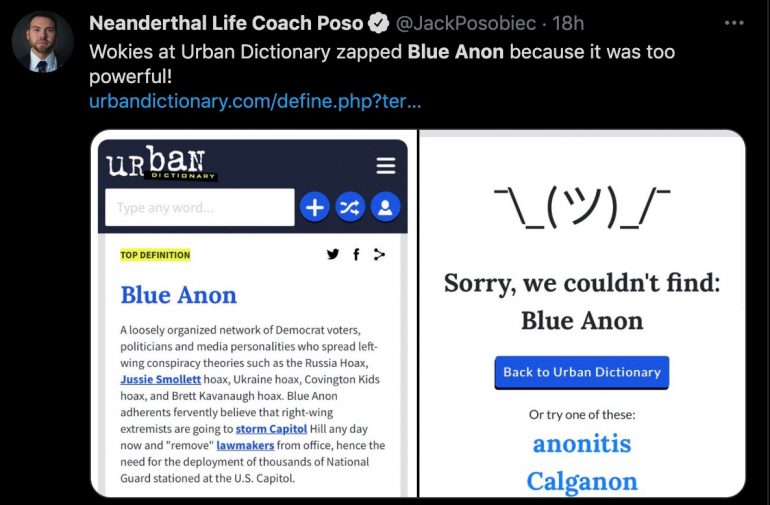 Contained within the Urban Dictionary definition were many of the top conspiracy theories bought into frequently by registered Democrats. Here is a list of them as they appear in the definition:

It went on to say, “Blue Anon adherents fervently believe that right-wing extremists are going to storm Capitol Hill any day now and “remove” lawmakers from office, hence the need for the deployment of thousands of National Guard stationed at the US Capitol.”

That was a problem for somebody because it’s quickly been pulled from the site by pro-left censors doing damage control. 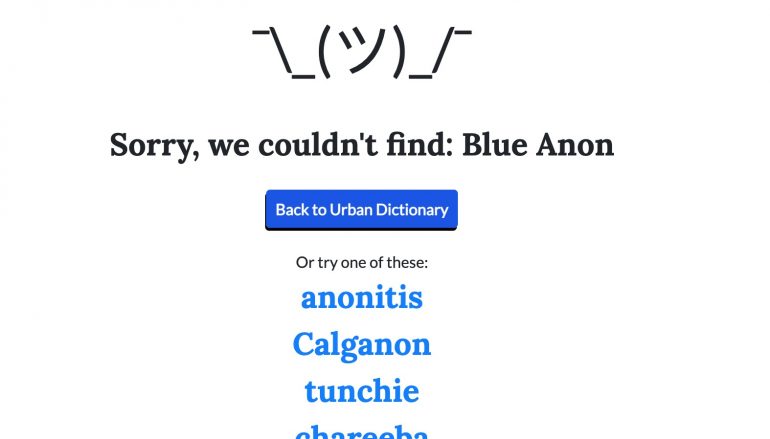 What does it mean when the Left silences an idea?

It means they think it is dangerous to their overall cause or their objectives. Just like it was when they all worked together to lock down the story of Hunter’s laptop — they were afraid it would hurt Biden’s chances in November — a fact that was proven true by the polling of Democrats who affirmed that news stories they had not been exposed to would have caused enough of them NOT to vote for Joe Biden in those critical battleground states that they ALL would have flipped red.

If they want to silence the use of ‘Blue-Anon’ as a pejorative tag, that’s a pretty good clue that it’s moving the needle in a way they don’t like.

So are YOU going to avoid calling their conspiracists ‘Blue-Anon’ just because the left wants us all to forget that term?

We think OUR readers are the kind that are ready for a fight.

Not just our guys, either. Our ladies are pretty badass too. Then again, they have really great role models to draw inspiration from.