As ClashDaily often points out, WaPo, in a parody of their own tagline, is providing the darkness in which Democracy can well and truly die. The old days of yellow journalism have nothing on the crass partisanship we’re seeing now.

As far back as January 4th, ClashDaily reprinted (with permission) an article one of our colleagues had produced with a transcript of the entire recorded phone call in which Trump had appealed Georgia’s Secretary of State Raffensperger to reconsider his support of the election results.

The story that was published by WaPo, CNN and others — and which made it into the national conversation and was EXPLICITLY cited as part of the rationale justifying the second time Articles of Impeachment were brought up against President Trump — accused Trump of pressuring Raffenspberger to falsify details of the election results.

Anyone who had bothered to read the full transcript would see that Trump was not calling for evidence to be invented, but instead produced several lines of argument which (Trump believed) could and should cast reasonable doubt on the legitimacy of at least some of the ballots that had been counted.

The two interpretations of this phone call could not be further apart. They are as far apart as the difference between an honest litigant who wants to change a judge’s mind on a point of law raising an objection in a courtroom or a mafia boss send a dead fish in the mail. Just because both scenarios have someone who wants to change the judge’s mind, does not make methods corrupt. (We explained this difference in an article published long before articles of impeachment were drafted in the days immediately following the release of the phone call.)

Now that the damage is done, WaPo has retracted the story. This is NOT an isolated incident. (Which reminds me, did they ever return that Pulitzer they got for the disproven story about Russian Collusion that hamstrung a Presidency, reduced a duly-appointed AG to mere spectator status in his own DOJ, launched a partisan political investigation and changed the outcome of the midterm elections? No, they didn’t. Because Democracy Dies In Darkness.)

WaPo has switched from offense to defense. The energy they used to attack Trump during his administration is being used to defend Biden during his. 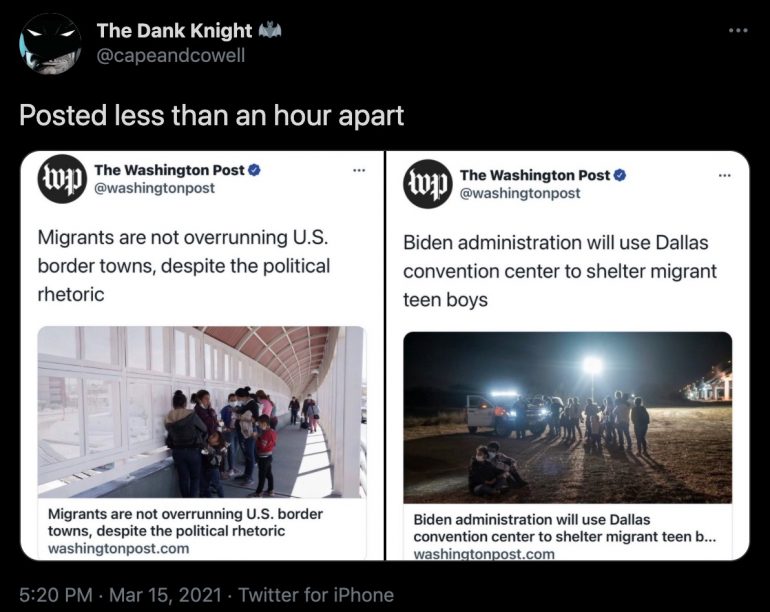 Here is a sample quote from the story on the left:

In Texas’s Rio Grande Valley — home to 13 international bridges for pedestrian and vehicles — traffic at the crossings is down 50 to 60 percent, representing millions in losses, according to U.S. Customs and Border Protection and local officials. In Hidalgo County alone, leaders say cross-border commerce represents about a third of its revenue. The same is happening at the 15 other international bridges and border crossings in the state.

“There’s no open borders here,” Hidalgo County Judge Richard Cortez said. “The border is shut down to most everyone.”

It goes on to describe this influx as a ‘relatively routine’ uptick in ‘migration’, resembling those of recent years. Most who attempt to enter are rebuffed at the border. Locals hardly ever encounter these people, and they are definitely NOT pouring in.

Of course, the involvement of the Federal Emergency Management Agency makes that argument a little more difficult to defend. So does the report by Dan Bongino that Secret Service members are being called upon to bolster the border. So does the story of children crammed into tents at three times capacity. (The Press Sec’s comments about Joe’s ‘kids in cages’ being used to mercifully comply with covid distancing aged like milk, didn’t it?)

Now let’s look at the story on the right in the tweet.

The Federal Emergency Management Agency will use a Dallas convention center as a temporary shelter for thousands of migrant teenage boys, an emergency measure the Biden administration is taking to alleviate extreme overcrowding at border facilities in South Texas, according to two Homeland Security officials with knowledge of the plans.

The Kay Bailey Hutchison Convention Center in downtown Dallas will house boys ages 15 to 17 to free up space in Border Patrol detention cells that are holding record numbers of unaccompanied teenagers and children in deteriorating conditions, the officials said.

Somehow, we are expected to believe that there are enough boys between the ages of fifteen and seventeen swarming the US border that a Convention Center is required to house them all . . . but that the numbers we have seen crossing the border are neither significant nor unusual.

And we cannot POSSIBLY believe there is a crisis of any kind.

Nor are we supposed to stop to ask ourselves whether swarms of such a singular demographic might be evidence that this might be an incentivized response by masses of individuals.

If you want a different OUTPUT you should use a different INPUT. Biden changed the inputs (government policy on borders, immigration, and enforcement). The masses have provided a different output.

An honest media would have reported that.

Then again, an honest media would NOT be trying to run both of these stories at the same time, would they?

If the ‘free press’ can’t even be bothered to pretend they are telling the public the truth, the rot of corruption is so widespread that they don’t even fear being caught. The only remedy in a corrupt solution is brave individuals standing up, speaking the truth, and challenging the status quo in whatever sphere of influence God has granted to them.

If you need some inspiration of times God has done exactly that, using unlikely heroes to do it, grab this: