Congressman Ted Lieu (D-CA) blasted a Congressional witness when he brought up a clear case of anti-Asian bias.

Rep. Lieu said that mentioning the blatant discrimination against Asians in the Harvard application process was “irrelevant” to the discussion during a Congressional hearing on diversity in federal courts.

The exchange occurred after Peter Kirsanow, a labor attorney and member of the United States Commission on Civil Rights, referenced the ongoing legal battle involving a group that has accused Harvard of discriminating against Asian Americans on the basis of race. The remark drew a strong rebuke from Lieu, who accused Kirsanow of deflecting from the topic of the hearing…

…The hearing before the House Judiciary Committee was titled, “The Importance of a Diverse Federal Judiciary.”

Kirsanow said he agreed with Lieu’s point regarding the dearth of Asian American judges in federal courts. The attorney argued his point about the Harvard case was relevant because there was “discrimination in the pipeline” of candidates to those courts which has “eroded confidence in the institutions.”

“It’s precisely why I say that we must avoid, at all costs, the perception that decisions are being made on the basis of race,” Kirsanow said. “And when you look at the correlative, with how decision-making is being made through the admissions process, it appears as if decisions, in large part, are being based on race.”
Source: Fox News

I almost feel bad for Rep. Lieu, partisan hack, arguing above his level of comprehension with someone who is clearly much better informed on the issue than he is.

I’d point out that Lieu is yelling at a black man, but that seems like a cheap dig and rather insulting to reduce Peter Kirsanow to just a member of a particular race when he’s an incredibly intelligent, articulate man who has been sounding the alarm on the dangers of the left’s new views on race and racism.

Kirsanow makes the obvious point that if Asian Americans are deliberately kept out of Ivy League schools, they’re less likely to take that path to the federal judiciary. Rep. Lieu can’t seem to grasp how that’s relevant.

This is just textbook Ted Lieu — he’s railing against the underrepresentation of Asian American judges in the federal judiciary because he says that’s clearly based on discrimination, but thinks it’s completely acceptable to discriminate against Asian Americans in the university application process because they are overrepresented there.

According to Rep. Lieu, discrimination is fine in some cases but not in others. He’s even fine with discrimination against Asians in the application process at Ivy League schools.

This is the left’s view of “equity” — some people are pushed down while others are elevated.

Most of us have seen this “Equality vs. Equity” meme: 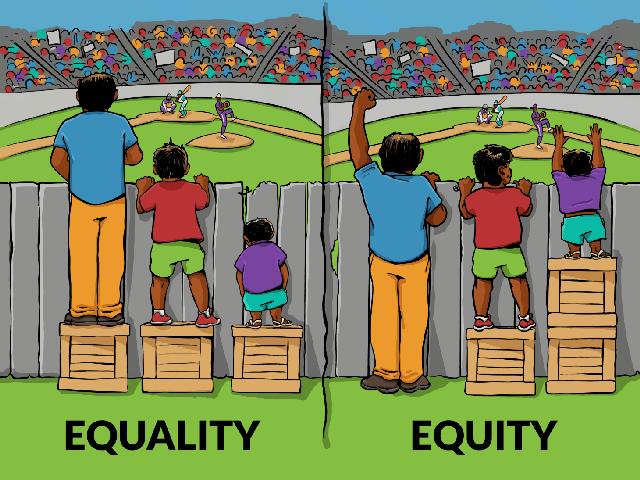 That’s the way that social justice warriors like to think that it works.

However, reality doesn’t always line up with theory.

In the case of the anti-Asian bias in Ivy League college admissions, this isn’t raising some people up that need a boost, it’s cutting down opportunities for other people.

In Ted Lieu’s world where discrimination against Asians at Harvard is fine, “equity” looks like this: 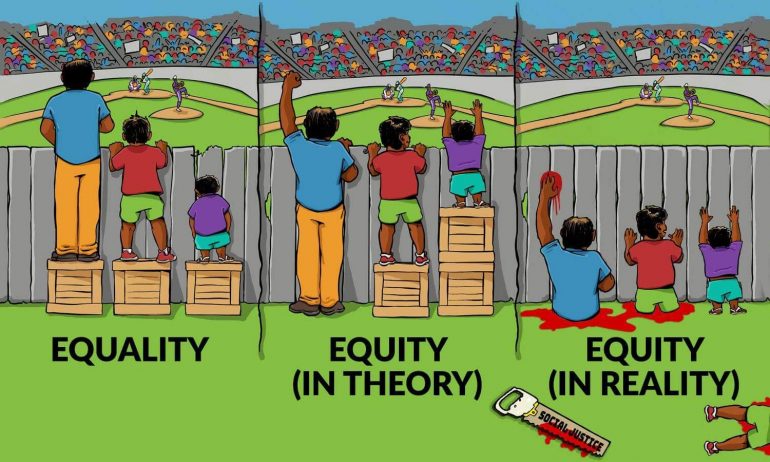 And Congressman Ted Lieu and a whole lot of his colleagues — including the Vice President — are totally fine with that.